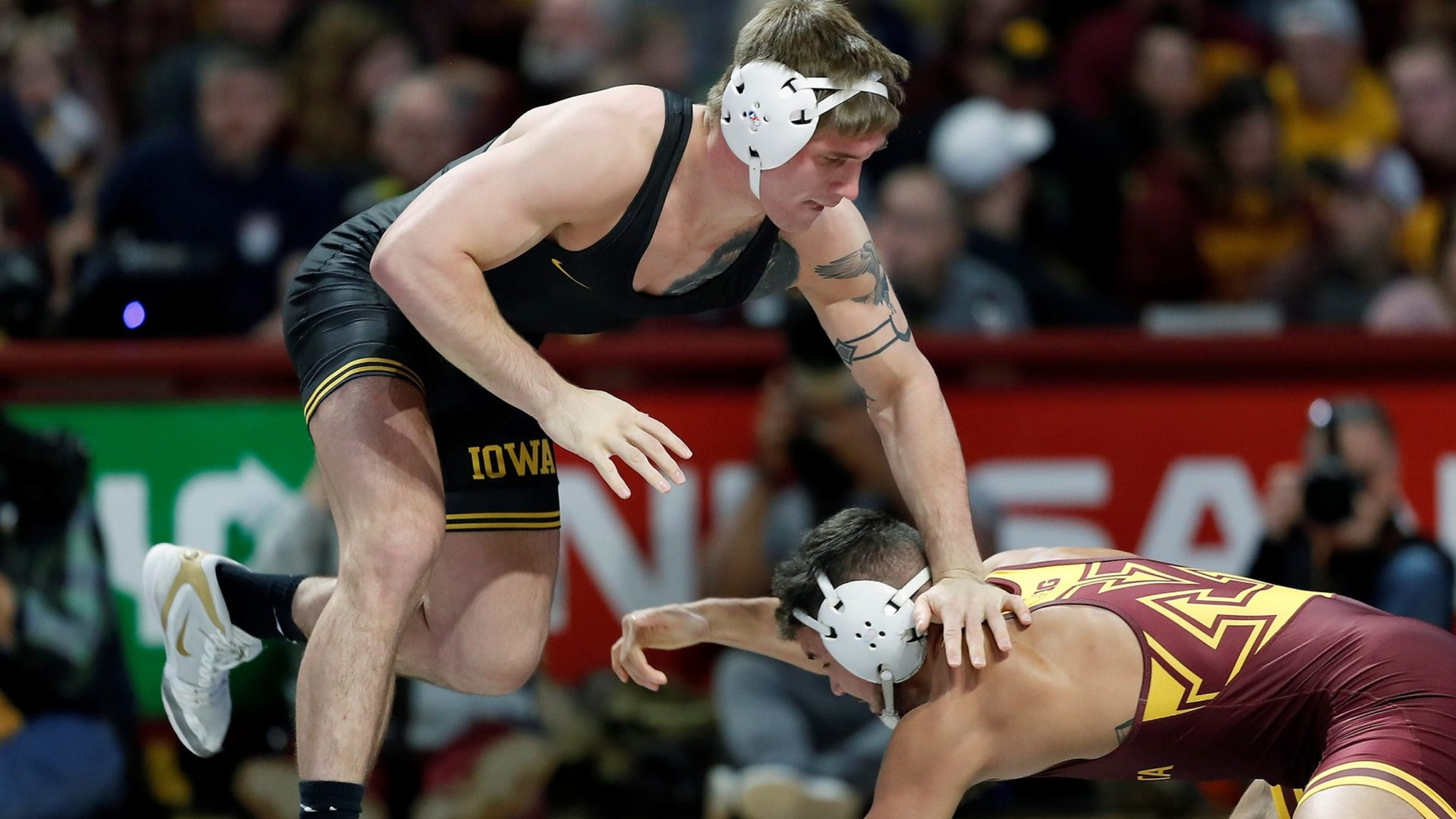 “I’m very happy and pleased for my entire team and coaching staff,” said Head Coach Tom Brands. “We knew we had a good team coming in, and the hard part was keeping up our intensity and maintaining our objectives throughout the year. While our entire team did a wonderful job all year, our 10 NCAA qualifiers did an especially good job and I’m proud of all of them. Our three champions put me in a much better mood than when we left the championships last year. With all our seniors, people are probably writing us off for next year, but our stable isn’t exactly empty.”

Metcalf collected his second NCAA title with a 3-2 victory over #1 seed Lance Palmer of Ohio State. The second-seeded Hawkeye senior held a 4-1 record against the Buckeye senior, but Palmer won the last meeting (9-3) at the 2010 Big Ten finals. Metcalf jumped out to a 2-0 lead with a takedown in the first 30 seconds. Palmer escaped once in the first period and once in the second to tie the score at 2-2. Despite some offensive shots, neither wrestler scored in the third period and Metcalf converted 1:35 in riding time to the winning point. The Hawkeye senior ends the season with a 36-1 mark and his three-year Iowa career (2008-10) as a two-time NCAA and Big Ten Champion and three-time all-American with a 108-3 record. In 2008, he earned the Dan Hodge Trophy, which is annually presented to the nation’s top collegiate wrestler, and the Jesse Owen Big Ten Male Athlete of the Year award. His 47 career pins ranks seventh in school history, and his career winning percentage (.973) ranks second. He posted a 68-1 career dual record, going 24-0 in Big Ten duals and scoring 346 team points in dual competition. The Davison, MI, native is one of four wrestlers in conference history to be named Big Ten Wrestler of the Week. He was also a two-time Big Ten Championships Outstanding Wrestler, 2008 Big Ten Wrestler of the Year and 2008 NCAA Division I Championships Outstanding Wrestling.

Borschel had a strong showing en route to his first NCAA title, handing undefeated #1 seed Mack Lewnes of Cornell his first loss of the season with a 6-2 decision. The second-seeded Hawkeye opened the dual with a takedown, which was the first one that Lewnes allowed the entire season. Borschel rode the Big Red junior the rest of the first period to accumulate 1:53 of riding time. Lewnes chose down to start the second period and Borschel added to his riding time before Lewnes escaped to make the score 2-1. Borschel held off two offensive charges by Lewnes to end the period. Lewnes intentionally released the Hawkeye senior to start the third period and Borschel scored another takedown to go up 5-2. Borschel rode Lewnes out the rest of the match, tallying 3:46 of riding time. The Hawkeye senior is one of 19 Iowa wrestlers in school history to post an undefeated season record, going 37-0. He ends his three-year Iowa career (2008-10) with a 98-10 record, winning the 2010 Big Ten and 2009 Midlands titles. He is a two-time all-American, three-time NCAA qualifier and three-time Big Ten and Midlands placewinner. Borschel went 62-3 in dual matches and 21-1 in Big Ten duals, scoring 265 team points in dual competition. He led the team in collegiate wins (37), dual wins (23), collegiate and dual winning percentage (1.000) and fastest fall (0:13) this season.

McDonough won his first NCAA title with a 3-1 decision over Iowa State redshirt freshman Andrew Long in the finals. It was only the second time in NCAA Division I Wrestling Championships history that two redshirt freshman have met in a national final. After a scoreless first period, Long chose the down position and escaped to take a 1-0 lead. McDonough took the fifth-seeded Cyclone down and rode him for the rest of the period to go up 2-1. The third-seeded Hawkeye chose the down position and escaped to make the score 3-1, beating Long for the fourth time this season. McDonough was warned for stalling near the end of the match, but held on for the win. He ends the season with a 37-1 season record, earning his first all-America honor. He was undefeated at 23-0 and scored 104 team points in dual competition. The 2010 Big Ten Freshman of the Year and conference runner-up at 125, McDonough scored bonus points in 28 of his 37 wins. He led the Hawkeyes in major decisions (15), collegiate wins (37), dual wins (23) and dual winning percentage (1.000), and also won his first Midlands title this season.

It looked liked Dennis was going to win his first NCAA title, but #1 seed Jayson Ness of Minnesota scored a takedown and nearfall points as time expired to collect his first national title with a 6-4 win. Dennis fought off his back during a first-period scramble, but no points were awarded, and the match was tied at 0-0 going into the second period. Dennis scored a reversal to take a 2-0 lead in the second period and kept the undefeated Golden Gopher senior down for the rest of the period. Ness escaped immediately to start the third period to make the score 2-1. Dennis capitalized off a third-period shot attempt by Ness to take a 4-1 lead, and the Minnesota senior took an injury timeout after his head collided with Dennis’ knee. Once action resumed, Ness scored an escape to make the score 4-2 and followed with the takedown and nearfall points for the win. Dennis finishes his four-year Hawkeye career (2006-10) as a two-time all-American and NCAA qualifier with a 69-28 career record at 133 pounds. A two-time Big Ten and Midlands placewinner, the Ingelside, IL, native posted a 44-15 dual record, which includes a 20-2 mark in 2008-09 and a 16-2 record this season.

The crowd saw several exciting scrambles in the 141-pound final between Marion and #1 seed Kyle Dake of Cornell, but Dake collected the 7-3 win and his first NCAA title. The Big Red true freshman led 5-1 early in the third period, but Marion scored a takedown to pull within two (5-3). Dake escaped, held Marion off and collected a point for 2:21 of riding time for the 7-3 win. Marion ends the season with a 37-9 career mark and a 27-6 season mark, earning his first all-America honor. The Des Moines, IA, native posted an 11-3 dual record, going 6-2 in Big Ten duals.

The NCAA team title wraps up the 2009-10 seasons for the Hawkeyes, which was one of the best in school history. The Hawkeyes won their 34th Big Ten Championships title, crowning individual champions in Borschel and Erekson. The team was undefeated at 23-0 in dual competition, marking the 13th undefeated and untied season in school history. Iowa was also 11-0 at Carver-Hawkeye Arena and 8-0 in Big Ten duals, winning the conference regular season title. Iowa won the 2009 Midlands and 2010 NWCA/Cliff Keen National Duals Division I team titles, ending the season on a 61 dual-match winning streak and shutting out eight dual opponents – both of which are school records.