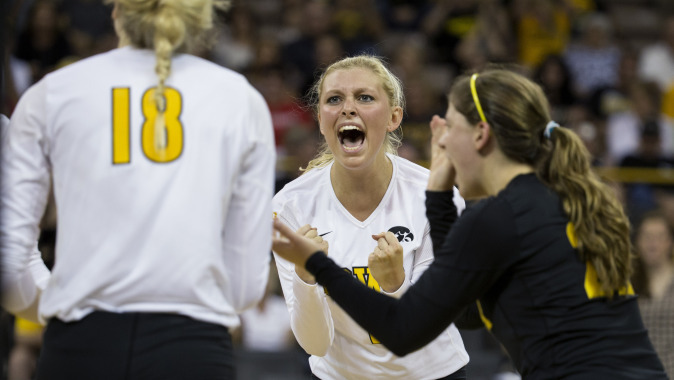 A LOOK AT THE WEEKEND
The University of Iowa volleyball team continues its home stand with a pair of contests on Mediacom Court in Carver-Hawkeye Arena, Friday and Saturday. The Hawkeyes face Ohio State Friday, which will be a Blackout match, and conclude the weekend with a match against No. 3 Penn State Saturday.

FOLLOW ALONG Fans who cannot attend the matches in person can watch a live video stream online through BTN Plus available at btn2go.com and BTN2Go mobile apps. Audio play-by-play by Tim Keating is also available through Hawkeye All Access, which is located at hawkeyesports.com. Links to Gametracker (live stats) are available for each match on the volleyball schedule page at hawkeyesports.com.

A NIGHT TO REMEMBER
The fourth-largest crowd in program history (2,631) attended the Hawkeye volleyball home opener against No. 8 Nebraska on Sept. 27. Iowa ultimately fell to the Cornhuskers in three sets (25-21, 25-13, 25-16), but the program appreciated the support and energy of the crowd.

TOUGH B1G START
The Hawkeyes started the Big Ten with a pair of matches against No. 8-ranked Nebraska last week. The team fell to the Cornhuskers, 3-0, in Lincoln on Sept. 24 and dropped its second match of the week to Nebraska, 3-0, at home on Sept. 27.

In two conference matches played, Alessandra Dietz leads the team with a .333 attack percentage and 10 kills, while Alex Lovell compiled a team-high 17 kills and 2.83 kill per set average. Michelle Fugarino is anchoring the back line with 20 digs (3.33 per set), Alyssa Klostermann has dished out a team-high 37 assists (6.17 per set) and Mikaela Gunderson is leading the blocking front with five (0.83) blocks in the stretch.

APPROACHING A MILESTONE
First-year head coach Bond Shymansky owns a career record of 298-114 (.723) and is just two wins from logging his 300th career victory. This is his 13th season as a head coach. He spent the past five seasons (2009-13) at the helm of the Marquette volleyball program and seven seasons before that leading Georgia Tech (2002-09).

ON DECK
The Hawkeyes are back on the road for a couple Big Ten matches, Oct. 10-11. Iowa takes on Michigan on Friday and Michigan State on Saturday. Both matches will begin at 6 p.m. (CT).