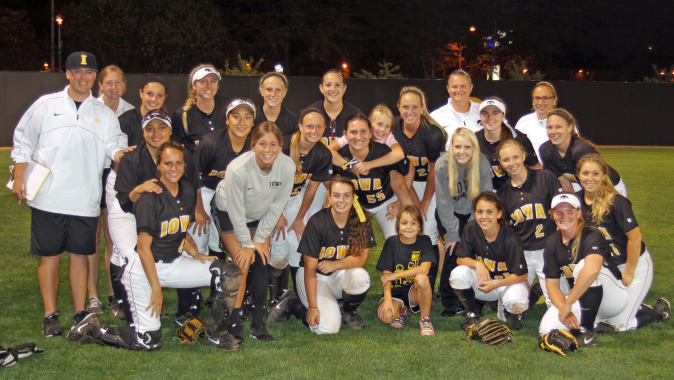 IOWA CITY, Iowa — The University of Iowa softball team continued to produce offensively in week two of its fall season with a 24-6 victory over St. Ambrose on Sept. 26. The Hawkeyes scored in every inning and every batter in the line-up reached base.

“They took the weekend before and learned from those innings where we didn’t score and took the attack mindset we want them to have into the game against St. Ambrose,” head coach Marla Looper said. “It didn’t hurt that St. Ambrose put up some runs and gave us a sense of urgency to keep scoring runs. No lead is safe, but it should be an attack mindset from the beginning, we shouldn’t shift to that because of something our opponents did. I think we did a really nice job of that in the game.”

The Hawkeyes jumped out to a four run lead in the first inning, but the Bees rallied back, scoring four runs to knot the score in the second. Iowa regained control from there adding one run in the second, three in the third, one in the fourth, one in the fifth, 12 in the sixth and two in the seventh.

The defense limited the St. Ambrose bats to just two more runs in the final five innings to record the 24-6 final win. Iowa starting pitcher Shayla Starkenburg pitched the first four innings with six strikeouts. Jillian Navarrete threw the next three innings and did not allow a hit, while Ashley Yoways collected four strikeouts in the final two of the contest.

“Shayla threw hard and kept the ball down a lot, Jillian came in and mixed speeds and threw a nice drop ball, and then Ashley came in and looked completely different,” Looper said. “She can hit all areas of the zone. She’s up, down, in, out and can mix speeds. They all look different, they’re mechanics are different, and they all complement each other well in the circle.”

Prior to the game, a special guest Chayse Gilchrist threw out the first pitch. The eight-year old is an avid softball fan who raised more than $5000 to benefit the University of Iowa Child’s Life Program, which helped her and her family during her medical hardships. She presented the check to program after throwing out the first pitch.

After receiving an email from the Gilchrist family asking if the team would be willing to show support at the 5K fundraiser and surprise Chayse, the Hawkeyes softball team was inspired to do what they could to help. Thirteen members of the team attended the race, high-fived participants and spent time with Chayse. It has been an experience to remember for each member of the team and the coaching staff.

“It was a great experience for everyone,” Looper said. “Chayse was really surprised and the Gilchrist family was shocked at the number of us that showed up. Any time our girls can be around people in the community and understand that people don’t have what they have has a big impact. She has impacted us more than she knows. We’ve created a lasting bond with her that will continue.”

To learn more about Chayse’s story and fundraiser, click HERE.

The Hawkeyes play in the annual BIG 4 Fall Tournament at Iowa State this weekend. Iowa takes on Drake and Iowa State on Saturday and concludes the tournament with games against Northern Iowa and Upper Iowa on Sunday.

“We’re going out to win,” Looper said. “We want to compete and attack offensively, in the box, and defensively. It’s time for us to get into that championship mindset going that we want to have this spring at the BIG 4.”