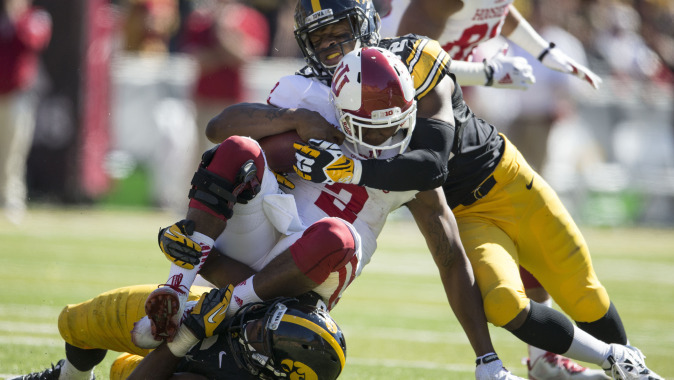 IOWA CITY, Iowa — When Hawkeye hearts started pounding and palms began to sweat Saturday, the University of Iowa defense did what it has done so many times during this young college football season.

It rose to the occasion.

Sounds odd in a game that featured 858 yards and 74 points. But when Iowa buckled down with back-to-back defensive stops in the second quarter, a seven point lead expanded to 17 at halftime, giving the Hawkeyes cushion while winning for a third consecutive time.

“It was important. Indiana is a team that makes you nervous from the start of the game to the end of the game,” UI head coach Kirk Ferentz said. “So to stop things a little bit, and for us to turn it into a positive right before the half, was important. I was not relaxed at any time today because they don’t let you.”

Two straight touchdowns by Indiana melted Iowa’s 28-7 lead into 28-21. And the Hoosiers had the ball with 9:39 left before halftime. On its next two offensive drives, Indiana ran three plays for five yards both times. The first series ended with a punt that Iowa turned into three points with a 22-yard field goal by Marshall Koehn.

The second drive ended with an interception by Iowa linebacker Bo Bower. Eight plays later — and with no time on the clock — running back Mark Weisman scored a 1-yard touchdown on fourth-and-goal to put the Hawkeyes ahead, 38-21.

“It was significant; a good mixture of team football,” said junior free safety Jordan Lomax. “Our offense was putting up points, the defense made a couple big stops.”

Lomax put out the final fire from the Hoosiers by intercepting a Chris Covington pass in the end zone with 76 seconds remaining.

The Hawkeye defense kept Indiana in check for four of the first six drives. With starting quarterback Nate Sudfeld in the game, the Hoosier drive chart looked like this:

During a span of 4:02 from the end of the first quarter to the 13:04 mark of the second, Iowa and Indiana both scored 14 points. With the Hawkeyes leading 28-14, Sudfeld was sacked by Hawkeyes Carl Davis and Drew Ott and left the game with an injury. He did not return.

Enter Covington, a true freshman, who last year at this time was on his way to becoming the first athlete from Al Raby High School in Chicago to earn a Division I scholarship. He was overmatched in his first real collegiate test against an Iowa defense that entered the game tops in fewest yards allowed in Big Ten games.

Covington’s first snap was a handoff that resulted in a 45-yard touchdown by Tevin Coleman. The rest of the half belonged to the Hawkeyes.

“We know they have an explosive offense and we wanted to keep the ball out of their hands and get them off the field quick,” Davis said. “That helped our offense do what they do. We needed to keep Indiana’s offense off the field.”

“I’m the middle linebacker, I’m the leader, I have to stay on these guys and I feel in the game we got a little too loose at times,” UI senior linebacker Quinton Alston said. “We have to go out there, keep our focus, keep fighting, and help this offense. We have to get them the ball back so they can put more points on the board.”

After Coleman’s 45-yard touchdown run, the next six Indiana series resulted in 19 plays, 30 yards, and no points.

“Anything to get our offense back on the field,” Ott said. “When we’re clicking and putting up points it is essential that we get the other team stopped so they can score more points.”