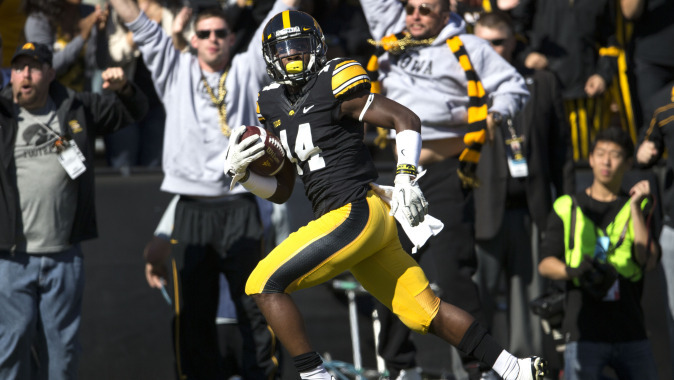 When the Hoosiers played Missouri, King noticed Indiana quarterback Nate Sudfeld look to his sideline, get the team set, take a three-step drop, and send a pass toward freshman wide receiver Dominique Booth. The same happened against North Texas.

So it isn’t a surprise how King got a quick break on his first career collegiate interception — a 35-yard pick six that gave the Hawkeyes a 14-0 lead in a game they won, 45-29.

Indiana faced third-and-3 from its 32 on its second offensive series of the Oct. 11 game at Iowa. Sudfeld peeked to the Hoosier sideline and set his team at the line of scrimmage. King had man-to-man coverage on Booth near Iowa’s bench. Prior to the snap, King backpedaled to the 40, giving Sudfeld a false feeling of cushion. In an instant, King broke for the ball that was spiraling toward Booth. The ESPNU announcers explain what followed:

“That’s a heck of a way to get your first career interception,” Adam Amin said. “The sophomore from Detroit takes it to the house.”

“Desmond just sat on the short side and he stuck that right hand in the air and the ball found it,” John Congemi added. “That was a terrific anticipation play by Desmond King. Great athleticism, then he showed you the flash of speed to get the Hawkeye defense in the end zone.”

King, who established a Michigan High School record with 29 career interceptions, earned his first pick for the Hawkeyes 19 games into his college career.

“High school and college are different. You have to be patient,” King said. “I was patient through this whole process and once I saw the ball, I had a split second to know if I wanted to take the interception or knock it down.”

Iowa has had an interception return for a touchdown in each of the last seven seasons and 12 of the last 14 seasons.

“Once I got the ball in my hand I knew I had to be dangerous,” King said.

King sprinted up the sideline, avoided a diving lunge at his feet by Booth, and coasted in for the score. He admitted to a reporter in a postgame interview that he let up for a brief moment before scoring. There was a reason.

“I wanted to feel the moment a little more and once I passed through the pylons it was home free,” said King, who had two pick-six interceptions at East English Village Prep in Detroit. “Hearing the crowd and seeing my team come and celebrate with me — it was a good moment for our defense, also.”

“Desmond and I were talking before the game how it was time for us to get an interception,” Lomax said. “You see that happen for one of your brothers and it’s a happy moment for everybody.”

The Hawkeyes (5-1 overall, 2-0 Big Ten) play at Maryland (4-2, 1-1) on Oct. 18 at 11 a.m. (CT) at Capital One Field inside Byrd Stadium. It will be the first meeting between the schools. Iowa has won six of its last seven road games, including both of its contests away from Kinnick Stadium this season.