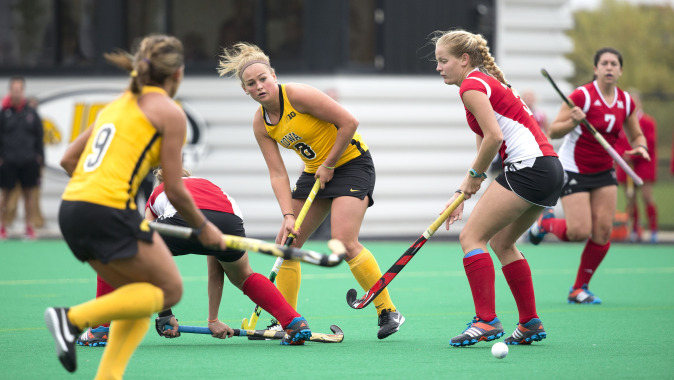 “We played a solid game today and were able to get some early goals on the board which gave us great confidence,” said UI head coach Lisa Cellucci. “We had a much greater defensive presence and that really helped generate our attack.”

The Hawkeye offense erupted early giving the Black and Gold a 2-0 edge in the opening three minutes. Stephanie Norlander was the first to strike — scoring her 14th goal of the season at the 1:58 mark to put Iowa on top, 1-0. Chandler Ackers extended the lead, 2-0, in the third minute netting the first goal of her career. Dani Hemeon registered the assist.

Natalie Cafone was the first to strike, registering a goal in the 58th minute to stretch the Hawkeye lead, 3-0. The Fairfield, New Jersey, native’s goal marked the 47th of her career — putting her one away from emerging into the program’s all-time top-10 goals list.

Mallory Lefkowitz capped the Hawkeye scoring at the 62:00 minute mark putting Iowa on top, 4-0, netting her third goal on the season.

The Buckeyes made a late push in the final two minutes netting a pair of goals but were unable to complete the comeback.

Sophomore Alexandra Pecora (9-5) played all 70 minutes and was credited with the win. The Marlton, New Jersey, native collected three saves.

The Hawkeyes return to action Oct. 25 hosting No. 5 Penn State at 1 p.m. (CT) at Grant Field for Senior Day.