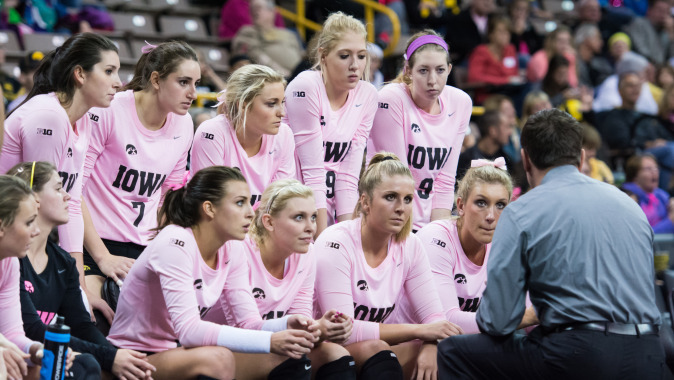 THE SCOOP
The University of Iowa volleyball team (9-10, 1-7) continues Big Ten action on the road this week. The Hawkeyes play at No. 5 Wisconsin on Wednesday, and at No. 25 Minnesota on Saturday. Each match will begin at 7 p.m. (CT).

FOLLOW ALONG
Hawkeye fans can watch both matches this week live online through BTN Plus at btn2go.com. Live audio by Tim Keating through Hawkeye All Access and Gametracker (live stats) are also available for each match on the volleyball schedule page at hawkeyesports.com.

THE TERMINATOR
Sophomore Lauren Brobst has emerged as the Hawkeyes’ go-to terminator in Big Ten action. The outside hitter has led the team in kills in seven-straight matches (9 vs. Nebraska, 6 vs. Ohio State, 9 vs. Penn State, 15 at Michigan, 13 at Michigan State, 18 vs. Illinois and 20 vs. Northwestern). Her most recent 20-kill performance is a season-high. Overall in the stretch, she has compiled a total of 90 kills (3.60 per set) and a .268 attack percentage to pace the Hawkeye offense.

DECIDING SETS
Iowa reached the fifth set for the first time in the 2014 season in consecutive matches at home last week. On Wednesday, the Hawkeyes forced a fifth, deciding set with No. 15-ranked Illinois with a 25-19 win in the fourth set, but ultimately fell to the Illini, 3-2. Northwestern sent the Saturday match to five sets with a 25-23 win in the fourth, but the Hawkeyes were victorious after a 15-12 set five win over the Wildcats. It marked the first Big Ten win for Iowa in 2014 and the new coaching staff.

ONE AWAY
First-year head coach Bond Shymansky owns a career record of 299-119 (.715) and is just one win away from logging his 300th career victory following Iowa’s 3-2 win over Northwestern on Oct. 18. This is his 13th season as a head coach. He spent the past five seasons (2009-13) at the helm of the Marquette volleyball program and seven seasons leading Georgia Tech (2002-09).

STATE TIES
Several Hawkeyes will be playing in their home states this week. Emily Yanny (New Berlin), Mikaela Gunderson (Casco) and Michelle Fugarino (Muskego) hail from Wisconsin, while Julianne Blomberg (Chanhassen) is a native of Minnesota.

Iowa assistant coach Jackie Simpson also has ties to Wisconsin, as she was a setter for the Badgers from 2004-07. She led the Badgers to the Elite Eight twice and the Sweet Sixteen once, was a two-time AVCA All-Mideast Region honoree, a two-time first team All-Big Ten selection, and an AVCA Second Team All-American. The Downers Grove, Illinois, native ended her career second all-time at Wisconsin and 17th all-time in the Big Ten in assists, and 12th all-time at Wisconsin in blocks.

B1G SUMMARY
? Iowa occupies 12th in the Big Ten standings with a record of 1-7 heading into Week 5 of the conference season. The Hawkeyes are ahead of Maryland and Rutgers (0-8).
? Senior Alessandra Dietz ranks eighth in the Big Ten in service aces per set (0.28) and 12th in hitting percentage (.324).
? Sophomore Alyssa Klostermann ranks 13th in the conference in assists per set (5.87) and 14th in service aces per set (0.25).
? Freshman Michelle Fugarino is eighth in digs per set (4.00) and ranks second among all freshmen in the league.
? Freshman Kaylee Smith ranks 14th in assists per set (5.86).

ON DECK
Iowa continues its road swing with matches at Maryland on Oct. 31 and Rutgers on Nov. 1. Both matches are scheduled to begin at 6 p.m. (CT). Hawkeye fans can watch the match at Maryland live online through BTN Plus available at btn2go.com.