Hawkeyes Hit the Road for Pair of Big Ten Battles 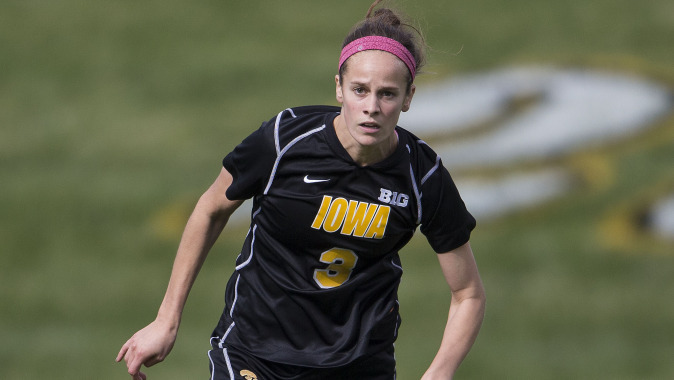 THE MATCH-UP
The University of Iowa soccer team kicks off a stretch of three-straight road contests this week with matchups at Ohio State and No. 7 Penn State. The Hawkeyes take on the Buckeyes in Columbus on Friday at 6 p.m. (CT) before facing the Nittany Lions in University Park on Sunday at 10:30 a.m.

QUICK HITTERS
? Iowa ranks second in the Big Ten with 10 shutouts through 16 games this season, seven by Hannah Clark and three by Kiley Beck. The duo has combined to allow 11 goals on the year, tying for the third fewest in the conference.
? Iowa is outscoring opponents by a margin of 27-11 and is outshooting opposing teams, 241-187, in 16 games this season. The 241 shots taken by the Hawkeyes are the most in the Big Ten.
? Senior Cloe Lacasse is tied for fifth in the Big Ten in goals (9), fourth in points (24), and third in shots (70).
? Among active players in the NCAA, Lacasse ranks eighth in career points (106), 12th in career goals (40), and 15th in career assists (26). The senior is also one-of-12 active players to amass at least 30 goals and 20 assists, ranking sixth.
? Senior Melanie Pickert is tied for second in the conference with three game-winning goals.
? Iowa has used 10 different starting lineups in 16 games this season.

SCOUTING OHIO STATE
Standing at 5-8-3 overall and 2-5-3 in conference play, the Buckeyes are coming off a 2-2 double overtime draw against No. 24 Michigan on Oct. 19. It was the third time in four games that Ohio State ended a contest with a tie. The Buckeyes are being outshot by opponents, 249-189, though 16 games and have allowed a conference-high 29 goals. The Buckeyes are led by Sammy Edwards, who has started in 15-of-16 games and has scored a team-high five goals. Nick Flohre is in his first season as assistant coach at Ohio State after spending the last two seasons at Iowa.

OHIO STATE VS. IOWA — THE SERIES
? The Buckeyes lead the all-time series, 11-5-1. ? Ohio State has won five of the last six meetings between the two schools, including last year’s 3-1 victory in Iowa City. ? The road team is 10-6-1 in the series.

SCOUTING PENN STATE
The Nittany Lions enter Sunday’s contest as the No. 7 team in the nation, posting a 14-2-0 overall and 9-1-0 Big Ten record. Penn State’s two losses came away from University Park, falling to 14th-ranked North Carolina on Sept. 5 and No. 20 Rutgers on Oct. 11. Penn State leads the Big Ten in goals (40) and points (112), and ranks second in assists (32). Freshman Franny Crouse has tallied seven goals to lead a Penn State squad that has seen 12 different players score on the year.

PENN STATE VS. IOWA — THE SERIES
? Penn State leads the all-time series over Iowa, 19-2-0.
? Iowa has won two-straight in the series. The Hawkeyes defeated the Nittany Lions at home on Oct. 25, 3-2, and again in the semifinals of the Big Ten Tournament on Nov. 8 in Champaign, Illinois, 1-0.

LAST GAME
Three first half goals, including two off the foot of senior Cloe Lacasse, lifted the University of Iowa soccer team to a 3-1 victory over Purdue on Oct. 19 at the Iowa Soccer Complex.

After Indiana took an early 1-0 lead in the 11th-minute, Iowa dominated the remainder of the contest, scoring three unanswered goals. Junior Hannah Clark picked up her seventh win of the season while anchoring a Hawkeye defense that held Purdue to seven shots.

HAWKEYES NOTCH 10TH WIN
Iowa posted its 10th win of the season for the fourth-consecutive year when it defeated Indiana, 1-0, on Oct. 17 — extending the longest stretch in program history. The Hawkeyes won 13 games in 2011, 12 in 2012 and a school-record 15 games last season.

Cloe Lacasse…
? has scored in five contests this season, including four two-goal games, pushing her career total to 11 as a Hawkeye.
? tallied her 100th career point in Iowa’s 2-0 victory over Illinois on Sept. 11, assisting on Nicole Urban’s strike. Lacasse is the second player in Iowa history to reach the 100-point mark.
? currently ranks second in Iowa history with 40 goals and 106 points. Sarah Lynch is the record holder with 112 points and 46 goals.
? has nine goals and six assists for 24 points in 2014. As a junior, she had six goals and seven assists in 23 games.

IOWA RECEIVING VOTES IN NSCAA POLL
The Hawkeyes received votes in the NSCAA’s latest poll released on Tuesday afternoon, coming in at No. 38.

IOWA FIFTH IN REGIONAL RANKINGS
For the second-straight week, the Hawkeyes find themselves at the No. 5 spot in the NSCAA Great Lakes Region rankings. Big Ten schools occupy seven spots in the 10-team rankings, including the top five.

The Sudbury, Ontario, native scored two goals and tallied a pair of assists in leading the Hawkeyes to a 2-0 weekend with victories over Indiana and Purdue. The forward assisted on the game-winning strike in a Senior Night triumph over the Hoosiers before scoring twice and assisting on the game-winner in a 3-1 win over Purdue.

CLARK BREAKS SCHOOL RECORD
Junior Hannah Clark broke the school record for shutouts on Oct. 2 in a 1-0 victory over Michigan State. Clark currently has 18 career shutouts. Clark posted four-straight shutouts from Sept. 7-20 — a streak that saw 12 saves over the course of 379:26 scoreless minutes. Clark has recorded a streak of four-straight shutouts in back-to-back seasons.

FIRST TIMERS
Sophomore Natalie Krygier became the fourth Hawkeye this season to score her first career goal when she found the back of the net in Iowa’s game at Michigan Oct. 5. Freshman Aubree Larson and sophomores Amanda Lulek and Corey Burns have also scored their first career goals in 2014.

STELLAR DEFENSE
If you don’t shoot, you can’t score. Iowa’s defense has allowed four or fewer shots on goal in nine games this season, and the Hawkeyes have allowed fewer than 10 shots in eight contests. In conference play, Iowa is tied for first in shutouts with six and rank fourth in goals allowed with seven.

GAME-WINNING GOALS
Sophomore Natalie Kygier and senior Emily Scott both recorded their first game-winning goals of the season this past weekend. Krygier’s came in a victory over Indiana on Oct. 17 and Scott’s came on Oct. 19 against Purdue. Eight different players on the Iowa roster have scored game-winners during the 2014 season. Senior Melanie Pickert leads the way with three.

HAWKEYES DISTRIBUTING
Iowa has tallied 23 assists through 16 games this year. Seven different Hawkeyes have recorded an assist this season, including senior Cloe Lacasse who leads the team with six.

BROWN: A CONSTANT Senior Caitlin Brown is the only Iowa player to log every minute of game action this season. The defender has played every minute for the past 50 games dating back to the 2012 season — a streak of 4,729 minutes.

SENIOR EXPERIENCE
Senior Melanie Pickert has started all 80 games of her Iowa career, while fellow seniors Caitlin Brown and Cloe Lacasse have started 79-of-80 games as Hawkeyes.

IOWA MAKES HISTORY
The week of Sept. 21 was a big one for the Hawkeyes. After starting 3-0 in Big Ten play, marking Iowa’s best start in league play in program history, the Hawkeyes were ranked No. 13 in the Sept. 23 Soccer America rankings, the highest ranking in program history. Iowa also broke into the Top Drawer Soccer Top-25, coming in at No. 25 and received votes in the NSCAA poll.

LACASSE HISTORICALLY SPEAKING
In three-plus years, junior Cloe Lacasse has made her mark on the Iowa soccer program. The Sudbury, Ontario, native is currently second in career goals (40), points (106), shots (294), game-winning goals (12), and assists (26). Lacasse led Iowa in goals scored, points, and shots taken in both the 2011 and 2012 seasons. She capped off her junior year by garnering second-team All-Big Ten selection and second-team NSCAA All-Great Lakes Region honors.

B1G IN THE POLLS
Penn State, Wisconsin, and Rutgers are ranked in the latest NSCAA Top 25 poll of the 2014 season. The Nittany Lions are ranked No. 7, the Badgers follow at No. 12, and the Scarlet Knights come in at No. 16. Iowa is also receiving votes.

NEXT UP
The Hawkeyes conclude the regular season with a road trip to Nebraska on Oct. 31. The matchup is slated to begin at 3:30 p.m. (CT).