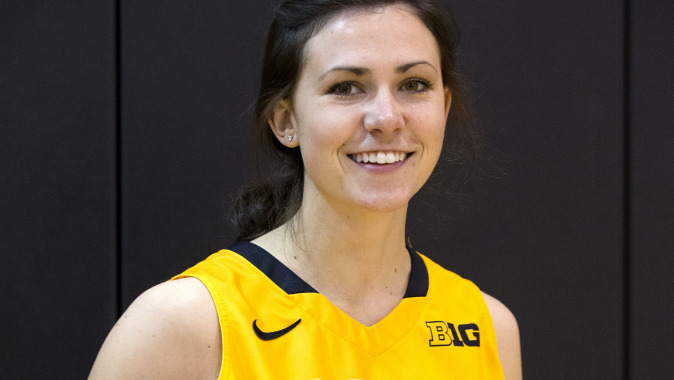 “Our team respects her for the success she has academically, but also for what she contributes in the locker room,” Bluder said Thursday during Media Day inside Carver-Hawkeye Arena. “I know fans don’t get to see that. But when she talks, everybody listens.”

You can’t mention Reynolds without academics. She graduated in three years with a bachelor’s degree in business management and is now a first-year law student in graduate school.

You also can’t mention Reynolds without injuries. In April, 2012 — between her freshman and sophomore seasons — she suffered an ACL injury in her right knee and missed the entire year. In two seasons, Reynolds has played in 41 games (with no starts), averaging 5.5 minutes and 1.0 points per game.

That didn’t keep teammates and coaches from naming her team captain along with fellow seniors Melissa Dixon and Samantha Logic.

“I am honored because I haven’t been on the court or had the experiences that a lot of my teammates have,” Reynolds said. “It showed they look at things like leadership and communication, and I was thrilled that they thought that was as important as things that happen on the court.”

Reynolds is a 5-foot-7 guard from Cincinnati. She missed her junior season of high school with an ACL tear, but rebounded to average 16 points and 2.5 steals per game as a senior. As a freshman at Iowa in 2011-12, Reynolds played in 21 games, scoring 13 points with 15 assists and nine rebounds. As a junior in 2013-14, she played in 20 games, scoring 26 points with five assists and three rebounds. She made six 3-point field goals.

“In terms of on-the-court production, it hasn’t been everything I would have hoped for,” Reynolds said. “In terms of the experience and the relationships, I couldn’t have asked for more. It has been a blast every day. It is something I will remember forever.”

Reynolds highlights off-court lessons learned from coaches and teammates that, to her, are as important as having success in a game. She speaks often through her actions and teammates have been receptive.

The Hawkeyes are rated 19th in The Associated Press poll released Thursday. Iowa opens the season Nov. 9 with an exhibition game against St. Ambrose University, the same NAIA institution where Bluder began her college coaching career in 1984. Last season the Hawkeyes were 27-9 (11-5 in the Big Ten) and advanced to the NCAA Tournament for a seventh consecutive season. The Big Ten welcomes two newcomers this season — Maryland, an NCAA Final Four participant last season, and Rutgers, the defending WNIT champion.

“We want to get a Big Ten championship,” Reynolds said. “I know that is a lofty goal, but if we hold ourselves accountable every day, work hard, and do the little things, hopefully that will add up to the goal.”

Reynolds continues to be a Hawkeye role model. She takes pride in setting examples for teammates on how to achieve in and outside of Carver-Hawkeye Arena. She leads in ways that aren’t defined by a box score.

“You don’t have to have the most points or the most minutes on the floor to be a good leader,” Bluder said. “She’s a great leader for us. Our team has so much respect for her. Kathryn does everything right on and off the court.”

Despite already having a diploma, the thought of this being her final season has crept up on Reynolds. Her last go-around provides perspective that it wasn’t long ago when her collegiate journey began. It also provides a sense of urgency to mentor younger Hawkeyes like freshmen Christina Buttenham, Chase Coley, Whitney Jennings, and Carly Mohns.

“If I can spend this year as a captain in a way that helps the freshmen and can make them feel they had the best experience possible, that would be a goal for me,” Reynolds said.

When Reynolds acts, people follow. When she talks…well, you know the rest of the story.