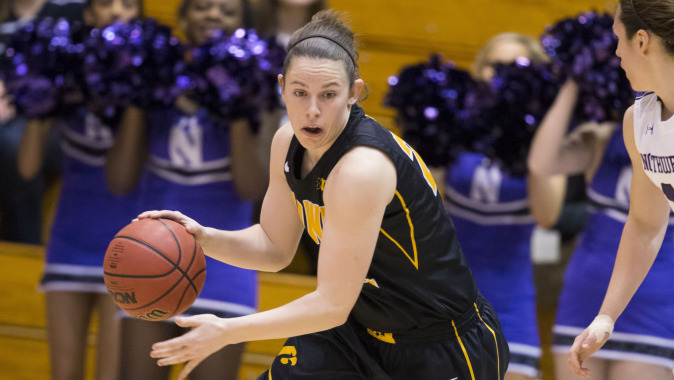 IOWA CITY, Iowa — University of Iowa senior point guard Samantha Logic is one of 16 student-athletes to be named to the Midseason Watch List for the Dawn Staley Award.

The Dawn Staley Award is given to the most outstanding collegiate guard in the country; a player who exemplifies the skills that Dawn possessed during her career (ball handling, scoring, her ability to distribute the basketball, and her will to win).

The recipient will be announced during Final Four weekend and the award ceremony will be held on April 17, 2015, at the Union League of Philadelphia.

Logic, named preseason All-Big Ten and preseason All-America by ESPN, has been named a 2014-15 `Wade Watch’ candidate, and to the Naismith Trophy Women’s Top 50 Watch List and the John R. Wooden Award Women’s Midseason Top 20 List. She has also been named a candidate for the 2015 Senior CLASS Award®.

Logic, the NCAA’s active career assists leader (775), ranks sixth in assists in Big Ten history. She leads the Big Ten and ranks fifth in the NCAA in the category this season (7.3), while also averaging 11.4 points and 6.7 rebounds per game. Logic is one-of-two players nationally to average at least 11 points, seven assists, and six rebounds per game (Brittany Boyd of California).