Hawkeyes Gear Up for B1G Tournament 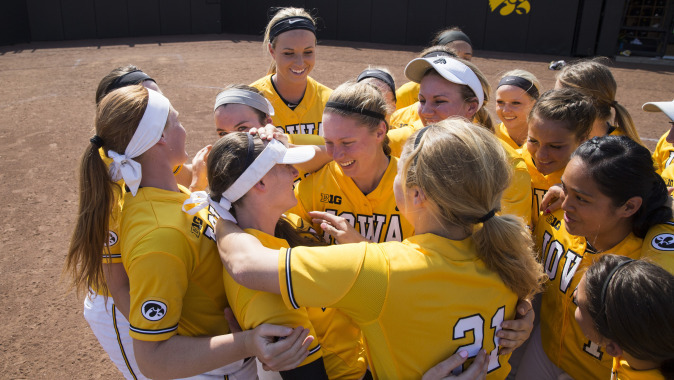 SERIES COVERAGE
Both games will be televised on the Big Ten Network. A live audio stream is also available. Play-by-play announcer Jil Price will call the action. Links are available on the softball schedule page at hawkeyesports.com.

B1G TOURNAMENT HISTORY
? Iowa is 21-23 (.477) in 17 appearances at the Big Ten Tournament.
? The Hawkeyes have won the conference tournament twice (2001, 2003).
? Iowa fell to Illinois in the first round of the 2014 Big Ten Tournament. After six scoreless innings, the Fighting Illini rallied to score six runs in the top of the seventh to secure the 6-0 victory.

WOOD PLATES 6
Freshman right fielder Allie Wood led Iowa to its 8-6 Senior Day victory over Northwestern on May 3. Wood gave the Hawkeyes an early lead when she sent the first grand slam of her career over the left field wall in the first, before logging her second long ball in as many at bats with a two-run blast to center in the bottom of the third. The Cypress, California, native recorded her fifth multiple-hit game of the season with a 2-for-4 performance at the plate. She set career-highs with six RBIs and two home runs.

STRIKEOUTS X 3
Redshirt sophomore pitcher Shayla Starkenburg has more than tripled her strikeout total of 51 from a season ago, totaling 181 so far in 2015. She has also significantly raised her strikeouts per appearance average from 2.43 (51 strikeouts in 21 appearances) in 2014 to 3.93 (181 in 46 appearances) this year. Starkenburg currently ranks second in the Big Ten in innings pitched (229.0) and games started (35), fourth in looking strikeouts (58) and appearances (46), and is tied for fifth in strikeouts (181).

DOUBLE TROUBLE
The Hawkeyes are tied for fifth in the Big Ten in doubles. Iowa has recorded 76 doubles on the season. Senior Megan Blank, the career doubles school record holder (60), leads the team with 17, while redshirt sophomore Sammi Gyerman has 11.

CONFERENCE AVERAGE
Three Hawkeyes are hitting .300+ in conference play. Senior Megan Blank leads the team with a .419 clip, while freshman Angela Schmiederer (.400) joins her in the 400s. Redshirt sophomore Sammi Gyerman has a .366 average through 23 conference contests this season.

TOUGH OUT
Senior Megan Blank has just 11 strikeouts in 161 at bats this season. Blank currently leads the team in batting average (.435), slugging percentage (.733), and on base percentage (.511).

STARKENBURG STRIKEOUTS
Redshirt sophomore Shayla Starkenburg ranks fifth in the Big Ten in batters struck out (181) and fourth in batters struck out looking (58). Starkenburg fanned a career high 11 batters in Iowa’s 3-2 10-inning victory over Wisconsin on April 12. She has struck out nine batters twice this season (Florida A&M on March 1; East Carolina on March 14. Starkenburg recorded her first career no-hitter against Southern Utah on Feb. 7. The Ankeny, Iowa, native has 181 strikeouts in 229.0 innings pitched this season.

CAREER DAY FOR STARKENBURG
Shayla Starkenburg threw a career-high 10 innings and fanned a career-high 11 batters in Iowa’s 10-inning win over the Badgers on April 12. The redshirt sophomore gave up three earned runs on 13 hits and two walks. The Ankeny, Iowa, native leads the Hawkeyes in wins (14), ERA (5.18), appearances (43), starts (33), complete games (26), shutouts (4), and strikeouts (171) this season.

GYERMAN MAKES HISTORY
Sammi Gyerman hit for the cycle to lead the Hawkeyes past the Illini, 15-7 after five innings, on April 3. The redshirt sophomore recorded a double and a triple in Iowa’s nine-run first inning before hitting a home run in the third and a single in the fourth. The San Pedro, California, native, became the first Hawkeye in school history to hit for the cycle and just the third player in the Big Ten to accomplish the feat. Gyerman posted career bests in hits (4), RBIs (6) and runs scored (3) in the contest.