Changes to College Hoops to Improve Pace of Play 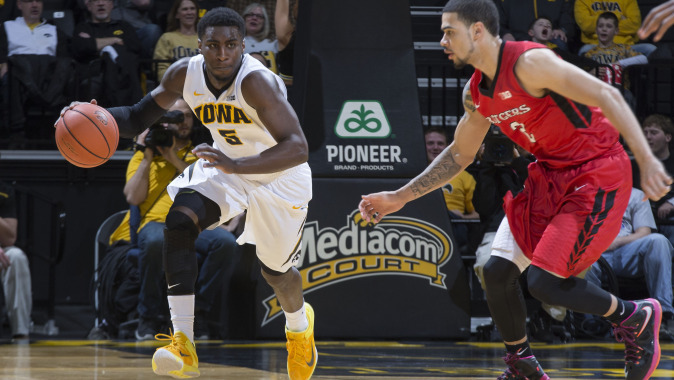 IOWA CITY, Iowa — On Monday, the NCAA Playing Rules Oversight Panel approved a number of proposals in men’s basketball to improve pace of play and reduce the physicality in the sport. Changes will begin to take affect this fall.

Pace of Play
The panel approved a number of proposals to improve the pace of play, including reducing the shot clock from 35 seconds to 30.

“I like the change to the 30-second shot clock, although I was okay with it being at 35,” said UI head coach Fran McCaffery. “We like to attack and drive the basketball, and like to run on makes and misses, so I think the change will be good for us.”

Other notable changes to improve pace of play include:

? Teams will have one fewer timeout (only three can carryover instead of four) in the second half.
? Adjusting the media timeout procedures to allow a timeout called within 30 seconds of a media timeout (at the 16:30 mark) or at any time after the scheduled media timeout becomes the media timeout.
? Removing the ability for a coach to call timeout when the ball is live.
? Allowing a total of only 10 seconds to cross half court(with a few exceptions).

McCaffery said the change of coaches not being able to execute timeouts during live play puts a premium on having high-basketball IQ players on the court who know when to call timeout.

“You have to change their mindset,” McCaffery said. “The thing you have to remember is that it doesn’t have to be the guy being trapped, any of your teammates can call a timeout.”

Restricted-Area Arc
The panel approved the expansion of the restricted-area arc from 3 feet to 4 feet. Moving the arc a foot farther from the basket is part of a continued focus on reducing the number of collisions at the basket.

“The one change I like the most is that they are extending the restricted arc to limit the number of collisions at the rim, which will result in fewer charging violations,” McCaffery said. “I don’t think defenders should be running in front of drivers causing collisions at the rim. The committee’s decision to try to address that was good for college basketball.”

Other changes
Expansion of video replay in two areas:

? Allowing officials to use the monitor to review a potential shot clock violation on made field goals throughout the entire game.
? During the use of a video review to see if a possible flagrant foul occurred, the panel approved a rule that would allow officials to penalize players who fake fouls.

The panel also eliminated the five-second closely guarded rule while dribbling the ball and making Class B technical fouls (hanging on the rim and delaying the resumption of play, for example) one-shot technical fouls. Previously, two shots were granted for these types of technical fouls.

“I can’t remember a year in the past where there have been this many changes to the game; but all-in-all I think they’re all good. The intent is to increase scoring,” said McCaffery.

McCaffery’s Hawkeye teams like to push the ball with the last four seasons, Iowa finishing in the top half of the Big Ten in scoring offense, including averaging the most points per game in 2013-14 (81.5).