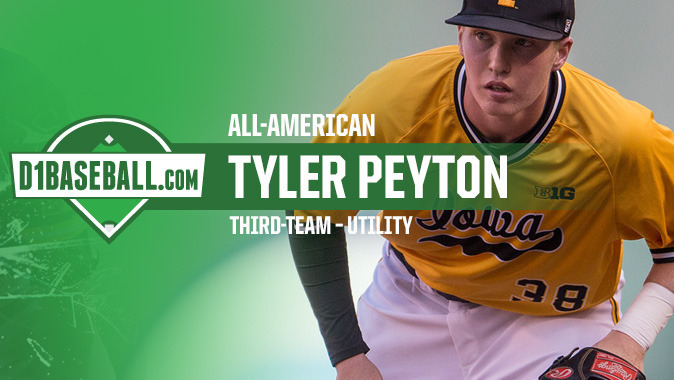 IOWA CITY, Iowa — University of Iowa junior Tyler Peyton has been named a third-team All-American as a utility player by D1Baseball.com, it was announced Thursday. It is Peyton’s second All-America honor in as many days.

The right-handed pitcher/first baseman earned third-team All-America honors by the National Collegiate Baseball Writers Association on Wednesday. It is Iowa’s third All-America nod this season, as Blake Hickman was a Louisville Slugger third-team honoree as a starting pitcher.

Peyton is the first Hawkeye since Tim Costo in 1990 to earn All-America distinction by two different outlets. Costo was a first-team All-American by Baseball America and The Sporting News.

Offensively, Peyton hit a team-best .337 with 31 runs and 31 RBIs. He tied for the team lead with 11 doubles and paced the squad with 34 walks. The John Olerud Two-Way Player of the Year Award semifinalist and third-team All-Big Ten selection had 18 multi-hit games, seven multi-RBI games, and hit safely in 39 contests.

Peyton was selected in the 33rd round of the Major League Baseball First-Year Player Draft on Wednesday by the Cincinnati Reds.