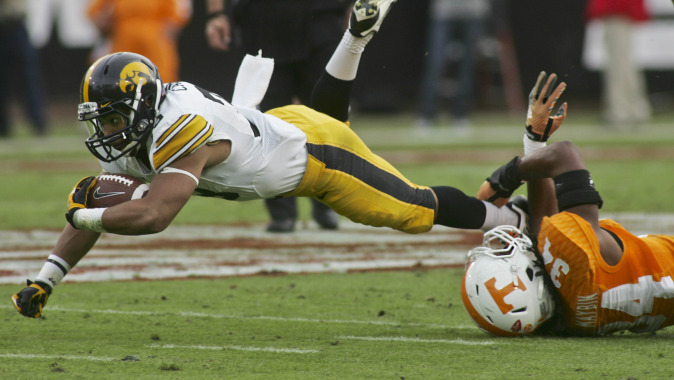 IOWA CITY, Iowa — As expected, sales of season tickets to the home games of the 2015 Iowa football team to the general public are down compared to a year ago, however, UI Athletics Department officials believe that another year-over-year increase in per game attendance and another Top 25 ranking in attendance are attainable goals.

As of last Friday (June 19), the UI Athletics Ticket Office had sold 32,656 season tickets to the general public. This total includes sales of all seats available in the premium seat areas inside Kinnick Stadium. The total also does not include most of the season tickets likely to be purchased by more than 650 new general public season ticket holders. Those fans of the Hawkeyes are still in the process of selecting their seat locations inside Kinnick Stadium.

“This isn’t a surprise. We expected a decline in the general public category, planned for it during the budgeting process, and jumpstarted our group sales for 2015 in response to it. Now that we are well down the path of executing our plan, I believe our goals of another increase in per game attendance and another year with a ranking in the Top 25 are attainable,” said Gary Barta, the UI’s director of athletics.

Iowa overcame a season ticket decline a year ago to record a per-game attendance increase. The Hawkeyes’ average attendance of 67,512 per game ranked 22nd in the country.

“Sales to current UI students were up at the end of the spring semester, which was great to see. Sales to incoming freshmen are up more than 40 percent and that’s very exciting,” Barta said.

Barta said working hard to engage UI students and particularly the incoming freshman class was one important piece of the plan for 2015. Another was boosting Iowa’s efforts in group sales.

“Our staff has already made well over 1,100 contacts with groups and organizations statewide and that number will double if not triple by the end of the summer. Most importantly, the feedback is overwhelmingly positive. I’m also hearing from lots of fans who didn’t renew their season tickets and often their message is that they still intend to be in Kinnick this fall as a three-game ticket customer or a single game customer,” Barta said.

“We’re committed to regaining our momentum. Some of that is related to doing everything possible to make the game-day experience fun, entertaining, and memorable. Some of that, of course, is related to what happens on the playing field and, ultimately, winning. Everyone in the department knows the important contribution they make individually to our success, whether they be a member of our ticket office staff or marketing staff or the coaching staff. Success will be the result of a team effort,” Barta said.

“I am excited to get back into Kinnick. I’ve talked with hundreds of fans this spring on the I-Club tour who are eager to give our student-athletes the home field advantage they deserve. Our foundation is strong and that strength, paired with our efforts this spring and summer, will play a big role in helping us regain momentum,” Barta said.