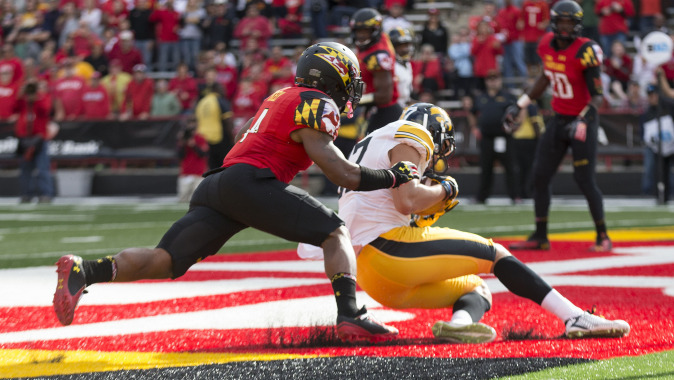 IOWA CITY, Iowa — Jacob Hillyer has seen action in all 38 games his first three seasons as a Hawkeye wide receiver and enters his final year one of 13 seniors on the team’s Leadership Group.

Last season, the native of Somerset, Texas, caught 11 passes for 105 yards and a touchdown. Hillyer (6-foot-4, 212 pounds) caught at least one pass in eight straight games to start the 2014 campaign. He was one of two offensive player’s to earn the Team Hustle Award at the conclusion of the season.

Hawkeyesports.com caught up with the leisure studies major at Media Day looking forward to the start the 2015 season.

In what ways have you stepped up to lead the team on and off the field?
Off the field, I would say that we did a leadership retreat this summer and it was where all of us leaders got together and we went camping. I can’t say just me personally, but as a team we have all stepped up and everyone knows that as a senior, especially the seniors, know that we need to bring that extra something off the field to create chemistry so that on the field we can play better together.

In what ways have your responsibilities changed from last year to this year?
The coaches really want me to go into that leadership role and be more of a positive leader. That is definitely a role that I have been a part of this year more than the last few years.

What is your favorite upgrade in the new facility?
Definitely the player’s lounge and the pool table; I’m really good at pool.

Any sentiments for starting your last season as a Hawkeye?
We do a ritual every summer for the fourth or fifth year guys going into their last season. They give out the Iron Hawk Award and that’s something I’ve been looking forward to since I was a freshman watching the older guys, like Marvin McNutt go up there and get their Iron Hawk. And now to go up there and experience it for myself, it has definitely been enjoyable.

Is there anything different that you have incorporated into your game (or style of play) over these past few seasons?
I think it is the mentality, being more mentally tough. Because it’s not all physical, 80 percent of it is mental.

What has been the biggest area of growth for you while being on the team?
It has been stepping into a leadership role, and being a guy that everyone can look up to.

What’s the craziest or most adventurous thing that you have done this summer?
I took a road trip the first two weeks of break. I took the road trip with my truck and some friends. We went all the way to California and stopped in Colorado, Utah, Arizona, and Las Vegas. We camped out in Colorado, Nevada, and Utah and we had a good time in Vegas.

What are some of your favorite team events that you guys take part of outside of Kinnick?
We went on a camping trip together this summer and all the guys really enjoyed that. We stayed in tents and did activities together. We went fishing, and I caught one fish, one little fish.

What are your feelings knowing you’ll be stepping back into Kinnick in less than a month?
Excited and anxious, especially knowing that it is my last season. It is my last time to have fun in Kinnick Stadium in front of 70,000 fans. I can’t wait.

Who would you say is the funniest person on the team?
Derrick Mitchell for sure, he is one of the funniest guys on the team. He is really out-going and does great impersonations, he is a cleaver guy.