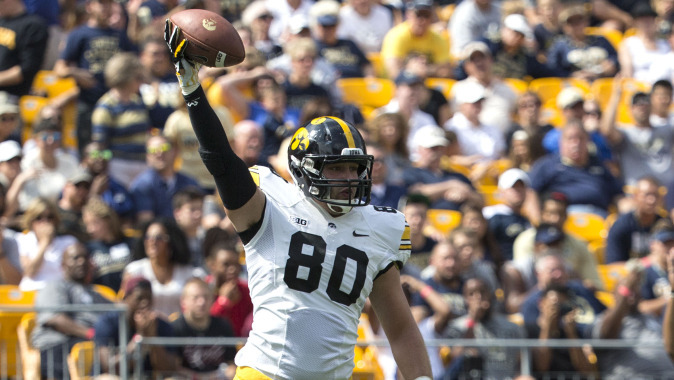 IOWA CITY, Iowa — Senior Henry Krieger Coble (6-foot-4, 250 pounds) has been climbing a crowded tight end ladder since his freshman year in 2011. The Mount Pleasant, Iowa, native is entering his final season in a Hawkeye uniform and is looking forward to leading the tight end group, along with classmate Jake Duzey.

In three seasons of competition, Krieger Coble has amassed three touchdowns, including two last season, and four starts. But near the top of the depth chart entering preseason camp, Krieger Coble’s numbers are expected to rise.

Hawkeyesports.com caught up with the leisure studies major, who is looking forward to the start the 2015 season.

Tight end is a position that is highly valued with coach Kirk Ferentz and has had a lot of talent in recent years. What did you learn from watching the guys before you play the position?
I learned a lot from C.J. (Fiedorowicz), Ray (Hamilton) and all those guys. You learn how to go about your daily work and what it’s like to work hard every day.

An injury at the end of last season held you out of the end of last season. For those who don’t know, what was the injury and what was it like recovering?
I tore my labrum and recovery was about six months. I was limited in spring practice and missed the last three games of the season. I am finally just getting back into the swing of things so it’s been really good to be back out there with the guys. I feel good and am ready to go.

What are your goals going into the season both personally and as a team?
We aren’t thinking too far ahead. We’re looking to improve every day and every facet of our game. I don’t have anything specific I am working on. I am just focused on getting better.

You have a new starting QB this season. How is the offense looking with him behind center?
We’re excited. C.J. is a great quarterback and we’re all looking forward to doing our jobs to the best of our ability, helping him out, helping each other out, and being the best we can be. As tight ends, we have to do our job and don’t worry much about who is back there. We have a lot of confidence in C.J.

What has been the biggest obstacle you’ve had to overcome at Iowa?
Learning how to be a successful player and learning to be a good player in this program. The biggest challenge coming in as a freshman is how fast everything is going. You have to follow the older guys and try to get better every day. It’s a big challenge to become a good player in the program, but as you get older, you definitely learn how to do that.

With five underclassmen tight ends, what have you been saying to them as they begin at Iowa?
All of us try to lead-by-example as much as possible. If we aren’t doing our job the way we need to do it then they have nothing to look at and base their actions. They count on us to be great leaders.

What are your thoughts on morning practices this season?
It will be different, but I don’t think that it will be too bad. After a couple weeks it will be routine and we will be fine. It should be a good change for us.

How do you think the team will benefit from being in the new football facility?
The practice facility is as good as it gets. It’s better than anything that any of us could ever ask for. There is nothing that this facility doesn’t have as far as treatment facilities, weight room, practice facilities and meeting rooms. You can’t get any better than what we have and we are looking forward to taking advantage of it for a full season.

Where is your favorite place to eat in Iowa City?
I can’t get enough of Oasis, the falafel place over by the Hamburg Inn.

Would you eat a raw egg?
No. I like to cook my eggs before I eat them. I have never eaten a raw egg. That’s something Drew (Ott) does.

Tickets for Iowa’s Sept. 5 opener against Illinois State are available by calling 1-800-IA-HAWKS or on hawkeyesports.com.