Athletics Directors Molded on the Gridiron 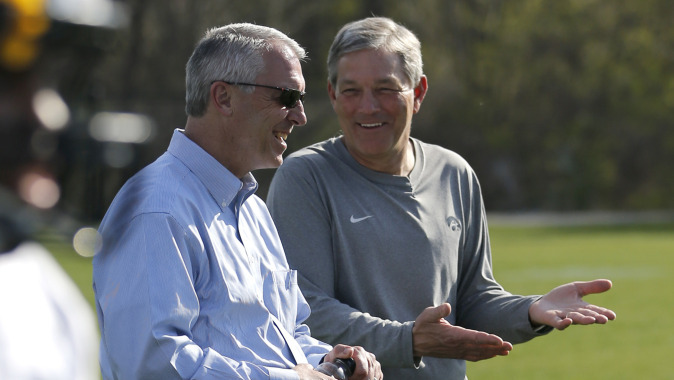 SPECIAL to the UNIVERSITY OF IOWA
FROM THE NATIONAL FOOTBALL FOUNDATION

IRVING, Texas — The National Football Foundation (NFF) and College Hall of Fame announced today a campaign to showcase all of the nation’s athletics directors who played football and how their experiences helped prepare them for leadership roles on our nation’s college campuses. The campaign will capture the unique stories of each athletics director, and the stories will appear throughout the season on FootballMatters.org, a powerful new addition to the NFF’s efforts to highlight the good in the game and the lifelong benefits to those who play it.

“We began profiling business, military and community leaders who played football on FootballMatters.org in last season, and athletics directors started coming to us, saying how much their experiences as players meant to them too,” said NFF President & CEO Steve Hatchell.

“We became captivated by the passion that the athletics directors who played football had for their experiences. So, it seemed to be natural to capture their stories and share them on FootballMatters.org. We think it’s going to be a great addition to our efforts to show the positive impact playing football has on people long after their playing days.”

The stories on athletics directors and their experiences becomes the latest addition to the NFF’s larger #FootballMatters Campaign, which provides people from border-to-border and coast-to-coast a voice in highlighting the positive impact that football has had on their lives. The spotlight on athletics directors will capture their thoughts on what football has meant to them and the elements that have had the most impact on their careers.

“FootballMatters.org has been a great addition to the National Football Foundation’s efforts to highlight all the amazing benefits that are created by our sport,” said NFF Chairman Archie Manning. “Hopefully the focus on the athletics directors will inspire some current players to follow in their footsteps, providing them a unique path to stay involved with the game and make an impact.”

“Football is a microcosm of life,” said Alleva.

“It is the ultimate team game. Leadership is learned in the huddle, and the game teaches one to respect everyone’s job. Nobody cares about the color of one’s skin or religion, only if they can do their job… Football has provided the framework and values for my leadership. It has taught me to never get too high or too low and how to move on to the next play. It teaches you how to deal with defeat and success as well as about planning and preparation.”

“Football helped shape my life in many ways and continues to serve as a foundation of my career,” said Barta.

“I learned how to compete, how to win and how to lose. Football shaped my leadership style and taught me how to push myself beyond limits that I thought were possible. It showed me what it meant to be part of a team and to sacrifice personal gain for a greater cause.”

The #FootballMatters campaign, which began in 2013, encourages participation via a series of national television spots with high-profile former players who subsequently achieved remarkable success later in life. The TV spots urge people to utilize social media platforms and the hashtag: #ImAFootballPlayer to share their football stories, which become part of the Twitter feed on the NFF website. The NFF added a new digital platform to the campaign, FootballMatters.org, in November of 2014, and the platform reached more than 2.5 million people in its first six months, garnering millions more media impressions on Twitter and Facebook. The platform engages more than 70,000 people a day, and the content has done a marvelous job of engaging a younger demographic in the efforts of the National Football Foundation.