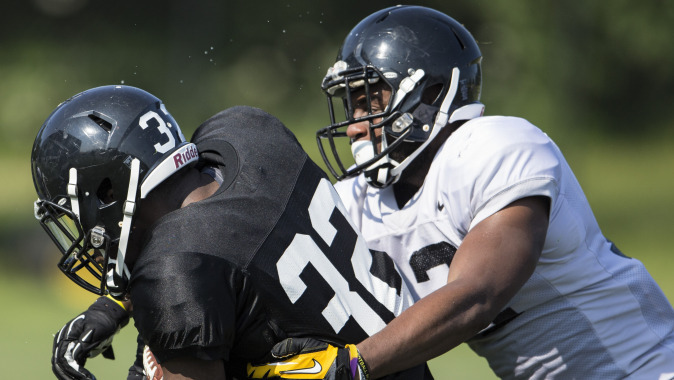 IOWA CITY, Iowa — It has been 10 years since the mention of Hurricane Katrina made stomachs churn in and around the city of New Orleans. The gale lasted eight days from Aug. 23-31 in 2005, but the shocking memory of its devastation survives.

University of Iowa junior safety Anthony Gair was an 11-year-old living in the Ninth Ward of New Orleans in 2005. One day he was checking the stop where a bus would pick him up for school, the next he was emigrating from Louisiana to Texas with his mother and then stepfather.

Seeking temporary shelter because of severe weather was nothing new to Gair or other residents of New Orleans. But before Katrina, it was usually a quick 90-minute trip to Baton Rouge to ride any storm out, many that never materialized.

On that day, Gair grabbed clothes, shoes, and a Nintendo Game Boy and bolted out the door. Traffic was heavier than normal — it took 17 hours to make the eight-hour drive to Texas.

“On our way we found out there was a (serious) storm coming and the levees broke,” Gair said. “It was crazy all the traffic and how many people were trying to escape from New Orleans.”

Gair’s mother, Raquel, was a native of New Orleans. Anthony was born and lived his first 11 years there.

Once they found refuge in Irving, Texas, Gair spent evenings on an inflatable mattress with his mother in a home they shared with 17 others. After about two months, Gair moved to an apartment in Irving, across from the middle school he would attend. Because of the hurricane, Gair didn’t begin classes in 2005 until October. The school — Barbara Bush Middle School — had a program for children misplaced by Katrina.

“I wasn’t the only one,” Gair said. “There were quite a few of us that dealt with this, so that made it easier.”

Because Katrina occurred in an era before Facebook and Instagram, there are still childhood friends Gair has not heard from in the decade since. He knows that a schoolmate and her father drown, and several neighbors spent time in the Superdome.

Gair has returned to New Orleans numerous times, including a few weeks before fall camp this summer. The first time he visited his abandoned home, there was a large X painted on the garage, indicating the property had been searched for inhabitants. Water levels nearly reached the ceiling; mold was everywhere.

“It wasn’t like we could take things out of the house,” Gair said. “Everything was ruined.”

As devastating as Katrina was, Gair searched for positives.

“I don’t think I would be (at the University of Iowa) if it wasn’t for Katrina,” he said. “In a sense, my faith in God gave me a new start. I don’t know where I would be if Katrina didn’t happen.”

“I don’t know if I would have gotten that in New Orleans or if I would be hanging out with the right crowd or any of that stuff,” Gair said.

There is nothing in a game program or media guide that would tip people off to Gair’s past in Louisiana. But he embraces it.

“When my teammates ask my hometown, I say I am from New Orleans but relocated to Dallas,” Gair said. “People think I’m from Dallas because I went to high school there, so I make sure to get my story out.”

Because of the anniversary, Katrina is in the news again. Gair is interested in “taking it all in” by watching reports that allows him to reminisce about his days in New Orleans. Enough time has passed, he is no longer overcome by emotion.

“It helped me realize that life is short,” Gair said. “You have to appreciate waking up the next day because you don’t know what will happen. It brought me closer to my mom and helped me appreciate my friends. It helps me appreciate life more.”

In two seasons with the Hawkeyes, Gair has made eight tackles. He preserved the win by intercepting a pass on the final play of Iowa’s 24-20 victory at Pittsburgh on Sept. 20, 2014. Gair is listed No. 2 on the depth chart at strong safety.

“I like Dallas and the environment there, New Orleans is nice as well,” Gair said. “I wish there was a place with no weather problems, but I know that is not the case.”