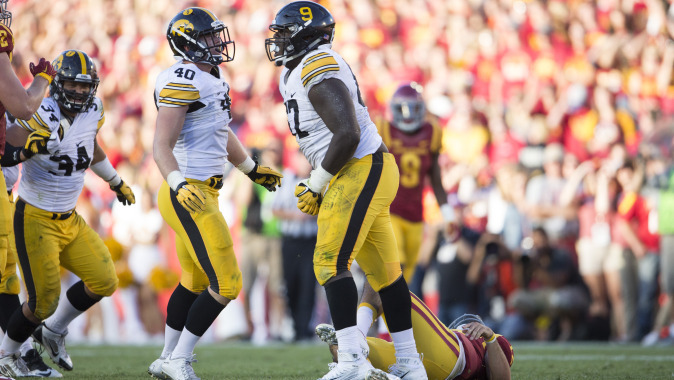 Davis, like Johnson, had to wait for his opportunity.

He redshirted in year one, battled injury in year two before playing sparingly as a sophomore. Davis started his first game as a Hawkeye in 2013, the first of 26 straight starts to close out his career. He was drafted by Baltimore in the 2015 NFL Draft and he started the Ravens’ season-opener Sept. 20.

“(Carl) told me to keep working hard,” said Johnson. “He told me to work hard on technique, effort, class, and football… work hard at everything I do.”

Johnson bode his time early in his Hawkeye career, watching and learning from the upperclassmen after being a four-start recruit out of Montini Catholic High School in Illinois.

After redshirting in 2012, Johnson played 20 games in the past two seasons, serving as an understudy to Davis and Louis Trinca-Pasat. When both players graduated and were selected in the 2015 NFL Draft, Johnson stepped up.

“We had to come up and show the crowd we were here,” said Johnson. “Everybody watched and respected Carl and Louis. Nate (Bazata) and I wanted to go out and show we could play at that level.”

With Johnson and Bazata manning the middle of the defensive line, the Hawkeyes have surrendered 98 rushing yards and no touchdowns through the first two games. Iowa is allowing 1.78 yards per carry to rank 10th nationally, and the Hawkeyes have the No. 8 rushing defense in the country, giving up 49 yards per game.

Johnson entered his junior season with 12 career tackles. He nearly matched his career total in two games with nine tackles, including a career-best five stops and a sack in a 31-17 road win at Iowa State.

“I try to go out and play with as much effort as I can (on every play),” said Johnson. “I try not to give up on a play because one play could lead to a touchdown and that’s not what we’re looking for. I try to play every down with energy and effort.”

It’s a trait that was hammered home to Johnson from Davis, Trinca-Pasat, and Mike Daniels. Johnson sat down with Daniels, a former Hawkeye and now Green Bay Packer defensive lineman following last season’s 48-7 win over Northwestern — a game where Daniels was the team’s honorary captain.

“We spoke about quite a few things,” said Johnson. “That helped me for the rest of the season and going into summer. He told me to keep working hard and everything would pay off. It is motivating (to talk and see those guys in the NFL). I know I can be there and perform at the same level.”

Johnson and the UI defense are off to a strong start in 2015, but the unit isn’t basking in its success.

“Pitt has a big, aggressive offensive line and both guards are back. If we play like we did at Iowa State, we should be good up front.”

The Panthers bring a 2-0 record into Saturday’s primetime matchup — a 7:12 p.m. (CT) kickoff — in Kinnick Stadium. Tickets are available by calling (800)-IA-HAWKS or visiting hawkeyesports.com.