Iowa Falls to No. 4 Nebraska 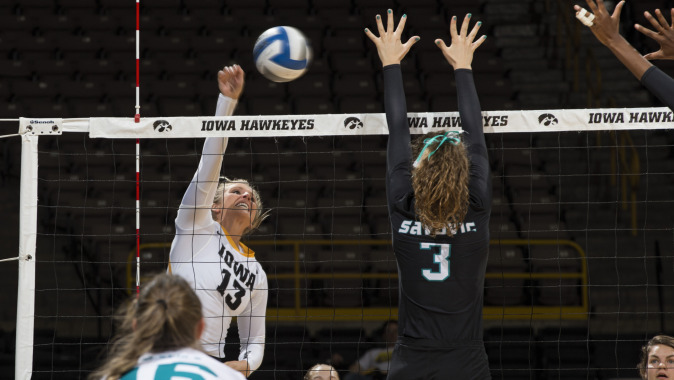 LINCOLN, Neb. — The University of Iowa volleyball team fell to No. 4 Nebraska in straight sets on Saturday night at Bob Devaney Sports Center. The Hawkeyes fall to 10-5 on the season, while the nationally ranked Huskers improve to 11-1.

“We just didn’t quite capture it tonight,” said UI head coach Bond Shymansky. “That’s on me as a coach. We are still learning and figuring it out. You come on the road in the Big Ten and you have to bring so much more intensity and teamwork as a whole unit. We are just going to have to be sharper.”

Nebraska controlled the first set, posting a .667 attack percentage on 14 kills and no errors. The Huskers used a 13-1 run to win the set, 25-10. The Nebraska block proved to be problem for the Hawkeyes as the Huskers posted 10 team blocks on the evening with five of them coming in the first set.

“They started blocking us a lot early,” said Shymansky. “When you get blocked as a hitter it makes you think a lot. You don’t want to be in thinking mode, you just want to be in doing mode.”

Down 17-11 in the second set, the Iowa block came alive to help the Hawkeyes pull with two points (18-16). Junior Loxley Keala posted a career high two solo blocks and a block assist, while junior Ashley Mariani (2) and sophomore Jess Janota also added block assists. The late surge wasn’t even to stop Nebraska as it went on to win the set 25-21.

The Huskers got out to a 16-8 lead in the first set before the Hawkeyes went on a five-point swing to pull within three (16-13). Freshman Reagan Davey served up the rally while senior Mikaela Gunderson and junior Lauren Brobst added kills. The Huskers responded late, going on a 3-0 run of their own to win the set, 25-18.

Brobst led the Iowa offense with eight kills, while Gunderson posted a .500 attack percentage with seven kills and no errors in 14 attempts. Keala led the team in assists (25) and blocks (4), while sophomore Annika Olsen posted a team-high 12 digs.

“Our goal and our plan is still the exact same,” said Shymansky. “Nothing changes after tonight’s loss. Our goal and plan is to prepare to win every match in the Big Ten and to get to the NCAA Tournament. We are making huge strides and we have a good thing going.”