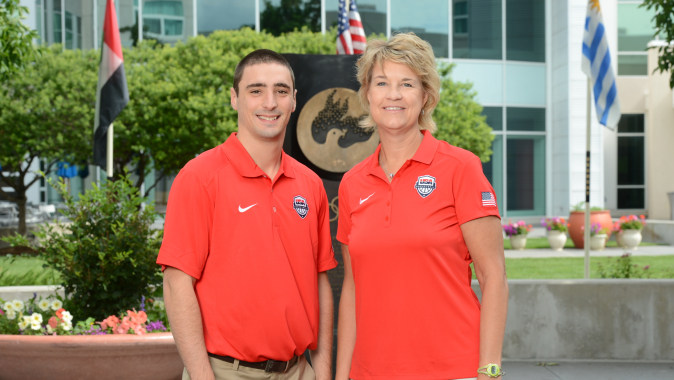 IOWA CITY, Iowa — Sixteenth-year University of Iowa head coach Lisa Bluder announced the addition of Sean Sullivan to her women’s basketball staff today. Sullivan, formerly the head manager for the Hawkeyes, has been hired as the team’s video coordinator.

“When we had a position open up for a video coordinator, I instantly thought of Sean,” Bluder said. “He just left our program as our head manager, and he traveled to the Pan American Games with me over the summer. He’s always done an excellent job.

“I know his love for the Hawkeyes, I know his work ethic, and I know his passion for this program. It was a natural hire, and we’re thrilled to have Sean and his enthusiasm and talent back with the Hawkeyes.”

Sullivan will handle the play-by-play breakdown of games for self and opponent scouting and organize film exchange.

“It’s exciting to be back because Iowa City is home for me,” Sullivan said. “When I was offered the position, it was a definite yes. I’m comfortable here after spending the last five years with the program, and I’m happy to be back.

“I want to thank coach Bluder and the rest of the staff for the opportunity to continue to work with Hawkeye women’s basketball.”

Sullivan spent the last five seasons as student manager for the Hawkeye women’s basketball team, and was elevated to head manager. His duties included in-game statistics management, coordination of team activities year-round, and the organization of all events, practices and games.

During his time as video coordinator for the U.S. Pan American Women’s Basketball Team in July 2015, Sullivan coordinated film production and distribution and served as the primary manager under Bluder. Team USA posted a record of 4-1, earning a silver medal.

Sullivan earned a bachelor of science in sport recreation management with an emphasis in coaching from Iowa in 2015. The Dean’s List participant also minored in American Sign Language.