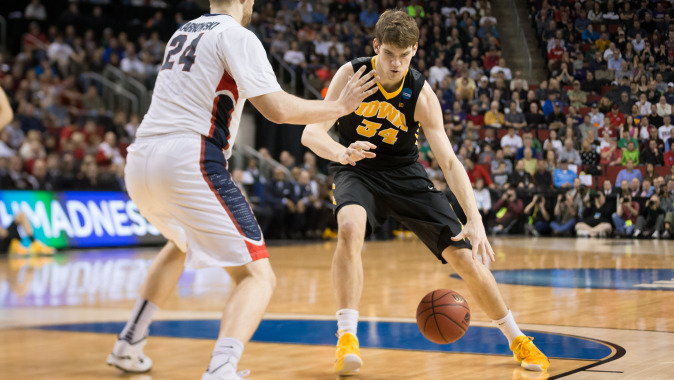 IOWA CITY, Iowa — As the dawn of a new season for University of Iowa men’s basketball approaches, the goals remain the same.

Fresh off a third place Big Ten Conference finish and advancing to the third round of the NCAA Tournament, the Hawkeyes continue their pursuit of a Big Ten championship and postseason success.

“It will be a fun team to coach because the older guys can bring these kids along and hopefully get them to where they need to be quicker,” said McCaffery. “We have good people in the program that want to be good and share the ball, and we’re not afraid to go on the road and compete.”

Iowa returns five of its top seven scorers from a year ago, including second-leading scorer (12.4 ppg.) and rebounder (6.4 rpg.) Jarrod Uthoff. The 6-foot-9 forward was a third-team All-Big Ten honoree last season and will be looked upon to boost his production as a senior.

“Jarrod is one of the most versatile players in the country,” McCaffery said. “He’s playing with great confidence and that’s what we need him to continue to do.”

“We won’t be as big, but we can leave Woodbury on the floor for a longer period of time,” said McCaffery. “It will be great for him and us. As you see his numbers go up, he’ll play with more confidence. I’m expecting a big year out of him.”

With a year of experience under his belt and 15 pounds of muscle to his frame, Uhl (6-foot-8, 215 pounds) is ready to take the next step after averaging 2.1 points and 1.8 rebounds as a freshman.

“He is so much more confident and sure of himself right now,” said McCaffery. “I believe going overseas (in August) and playing against that level of competition with the East Coast All-Star team was a phenomenal experience for him.”

Although the team’s length does not match last year, McCaffery likes the combinations he will have at his disposal.

“I believe our 3-point shooting and athleticism will be better, and our team overall will be deeper,” McCaffery said. “We have incredible perimeter depth. I believe we will be able to stretch the floor in a big way.”

Experience in the backcourt consists of seniors Mike Gesell and Anthony Clemmons, along with junior Peter Jok. McCaffery knows that experienced and productive guard play is critical to success in the Big Ten.

“You have a couple exceptions, but by-in-large, it’s the veteran guards in this league that have their teams in the top half of the toughest conference in the country,” McCaffery said. “Peter, Mike, and Anthony give us great confidence that our team can be good.”

Gesell enters his final season as one of three Hawkeyes to ever amass 800+ points, 350+ assists, 200+ rebounds, and 100+ steals prior to his senior year. Gesell serves as the team’s floor general for a fourth year.

“Mike has improved every year,” McCaffery said. “He has become more confident, and is an underrated defender. You feel good when the game starts with the ball in his hands.”

Clemmons continued his development last year as a junior earning the team’s Most Improved Player Award after leading the team in 3-point accuracy (.373) and posting a single-season best in scoring (4.8 ppg.). McCaffery says that their experience will help this team on and off the court.

“They can make plays, shots, and both defend,” said McCaffery. “They do it with little fanfare. It’s a pleasure as a coach when you have two guys who conduct themselves the way do because it relaxes everybody around them knowing they’re there.”

McCaffery believes this year’s team has a number of players who can attack the basket and shoot at a high percentage from 3-point range. In addition to Jok, who made 36 triples a year ago, McCaffery likes the shooting ability of redshirt freshman Brady Ellingson, and freshmen Andrew Fleming, Isaiah Moss, Christian Williams, and Jones.

“When you look at the group, you have a lot of options,” McCaffery said. “The impressive thing about the young guys is that they have come in ready to compete for playing time. They don’t want to come in and wait their turn; they want to play. That creates an atmosphere of competition and helps everyone get better every day.”

Rounding out the roster are walk-ons Okey Okah, and Michael and Steven Soukup. Ukah, a senior provides depth in the post, while the Soukup twins join the Hawkeye roster after two seasons at Southeastern Community College playing in the backcourt.

Ever since McCaffery’s arrival in Iowa City, each of his teams has had a foundation of solid senior leadership, and this year will be no different.

“We have unbelievable leadership with this group,” McCaffery said. “It starts with Clemmons, Gesell, and Woodbury; they came in together and started as freshmen. Uthoff falls into that senior class with the kind of success he has had and the kind of person he is. They all have character and want to win.”