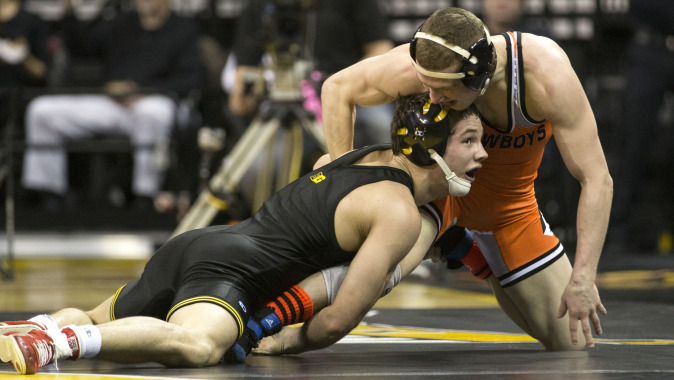 IOWA CITY, Iowa — Thomas Gilman wants to be the University of Iowa wrestling team’s trailblazer. He wants to set the tone.

Gilman is expected to be the first Hawkeye to take the mat at 125 pounds when No. 4 Iowa hosts top-ranked Oklahoma State in the “Grapple on the Gridiron” Saturday at 11 a.m. (CT) inside Kinnick Stadium.

The dual marks the first time in NCAA history two wrestling programs compete outside at a Division I football stadium.

Gilman will square off against Oklahoma State’s Eddie Klimara in an early season All-America matchup. Gilman placed fourth at last season’s NCAA Championships and is ranked as high as No. 3 in the preseason polls. Klimara finished seventh last season and is rated as high as No. 6.

“I like wrestling highly-rated opponents early in the season,” said Gilman. “I know Klimara is going to come out hard. We have a little bit of history, and we’re both competitors.”

Gilman is 5-0 lifetime against Klimara. He won the first four bouts by decision before winning by major decision, 15-5, in the dual last season in Stillwater, Oklahoma.

“Anytime you can wrestle a guy that’s going to come out hard and thinks he has an opportunity to beat you, it is fun,” said Gilman. “It’s fun to put a knot on his head, throw him down, and let him know who’s boss.”

The weather forecast for Saturday’s dual is sunny with a high of 59 degrees. Warm or frigid, Gilman isn’t worried about the elements; he says the Hawkeyes are prepared for anything.

“The weather doesn’t matter, whether it’s 20 or 70 degrees,” he said. “We’re going to be ready to go. As long as we’re warmed up, that’s all that matters.

“We run, wrestle, and hand fight in the cold weather, so once that cold air hits our lungs, that’s when we’re going to excel. Those Oklahoma State guys, I don’t know how much the weather is going to affect them.”

Gilman doesn’t know what to expect as far as the environment inside Kinnick Stadium, but he knows it will be electric.

“Carver-Hawkeye Arena is the place to wrestle,” he said. “Kinnick isn’t the place, but we’re going to make it that place. We’re going to have all our fans there and then some.”

Once Gilman takes the mat, he says the crowd won’t be a factor.

“When I go out there, I am on a mission,” he said. “The only thing I see is (my opponent’s) leg and how I am going to take it above his head and put him down hard. The texture of the mat and the temperature doesn’t matter.

“The fans could be blaring the loudest music, throwing stuff out on the mat, or ripping the mat out from underneath us. That’s not going to matter because I am on a mission, and I am pretty good at accomplishing that mission.”

General admission tickets remain on sale for $10. Fans planning on attending are encouraged to purchase tickets online at hawkeyesports.com and select the “print at home” option. Free shuttle services will be available at West High School, the UI Hall of Fame, Hawkeye Commuter Lot, and Hancher Auditorium.