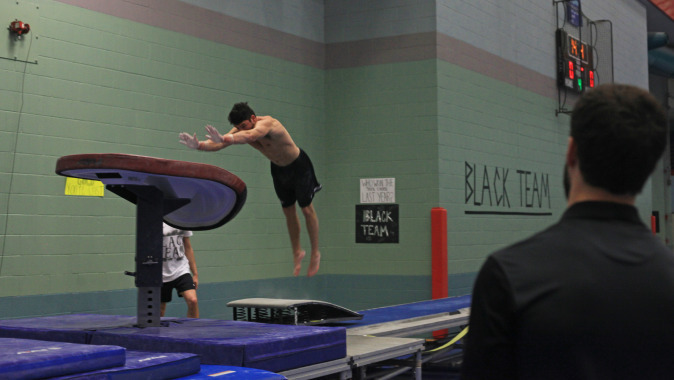 IOWA CITY, Iowa — For the sixth time in his tenure, University of Iowa men’s gymnastics head coach JD Reive hosted the Black and Gold Intrasquad meet, but this is the first time he has felt this good about his team moving forward.

The annual event split the Hawkeyes into the black team and gold team. The evenly matched squads swapped leads, keeping the score within a point for most of the meet. While the outcome narrowly favored the gold team, 253.250-252.600, Reive was happy for the entire group.

“The guys did fantastic,” Reive said. “We had a lot of new skill and new routines. I wanted to gauge where we are physically and mentally and they handled everything better than I anticipated. I am pleased. This is the most successful intrasquad meet I have had since I’ve been here.”

Six freshmen made their Hawkeye debuts, giving the coaches a lot to take a look at. Jake Brodarzon and Rogelio Vazquez highlighted the day for the freshman class with strong performances on multiple events. Reive says the freshmen have made his job harder as they look to putting together a lineup for the regular season.

“The freshmen were awesome,” Reive said. “Both Jake and Rogelio did well. It’s what we want from them. They made my job a lot harder because we have to pick five guys from this group. It’s a fantastic position to be in because I want to have a challenge in figuring out who is representing us on the weekends.”

Brodarzon competed in four events in the meet with his highest finish coming on the parallel bars where he finished third with a score of 14.250. While there were some mistakes, a month until the next competition gives him enough time to improve his gymnastics.

“We did what we have done in practice so there are still some mistakes we have to work out,” Brodarzon said. “I am excited for the season to start.”

Brodarzon says looking up to the upperclassmen helped him stay focused during the meet.

“Matt (Loochtan) and Jack (Boyle) always motivate me,” Brodarzon said. “Watching them motivates you to go back into the gym and work harder.”

It wasn’t just the freshmen that has Reive excited for 2016, sophomore Andrew Botto has the potential for a break out year. Botto placed first overall on rings, falling just short of his personal best on the event with a 14.900.

“Andrew is going to do excellent this year,” Reive said. “We have a lot of new things for him and he showed up in a big way with a lot of new stuff.”

The team will take the next month to polish their skills and iron out the lineups before beginning the regular season in Chicago at the Windy City Invitational on Jan. 17.