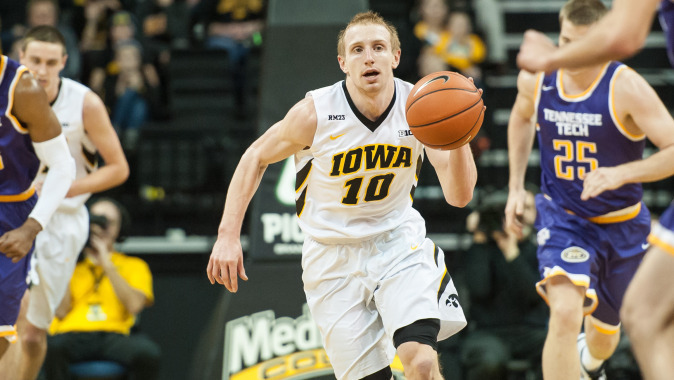 The Spartans have won nine straight over Iowa and 14 of the last 15 games in the series. Iowa’s lone triumph was a 72-52 victory during the 2011 season in Fran McCaffery‘s first season as head coach.

“I haven’t beaten them yet,” said senior guard Mike Gesell. “This is always a fun matchup, they’re good every year. Coach (Tom) Izzo is one of the best coaches and always has his team ready. They’re a team that will get after us defensively. It will be a great opener.”

Iowa finished the nonconference schedule with a 10-3 record with its three losses coming by a combined 12 points to Dayton, Notre Dame, and Iowa State — three teams that are a combined 27-6 in 2015-16.

“We’re in a good place,” said McCaffery. “You always look at, could we run our offense a little more efficiently? Could our defense get more consecutive stops? But we’re taking care of the ball, our shot selection is good, and our ball movement is good. We have a lot of different guys producing, so ultimately, I feel pretty good.”

Iowa has had nine different players reach double figures at least once this season and five different Hawkeyes have led the team in scoring at least once in 13 games. Iowa is shooting the ball more proficiently, hitting 10 or more 3-pointers in seven games and connecting at a nearly 40 percent clip for the season.

“This is the best shooting team we’ve had since I’ve been here,” said Gesell. “Peter (Jok) and Jarrod (Uthoff) can light it up, and (Nicholas) Baer has been shooting well lately. We have so many guys that can shoot, we can spread the floor and that opens things up.”

The Hawkeyes will need to rely on its experience to win in the Big Ten. Iowa’s aforementioned seniors have won 30 games in three seasons in conference play, including 12 victories last season in leading Iowa to a top-three league finish.

“I’m happy with where we’re at, but we have a long way to go to be a championship team,” said Gesell. “We’re looking to get better every day, and we have the pieces to make a run, we just have to take it one game at a time. We need stay in the now and not think too far ahead.”

The goal is a Big Ten title. The fewest regular season victories a league champion has had since the conference switched to an 18 game schedule in 2007-08 was 13 wins by Ohio State, Michigan State, and Michigan in 2011-12.

“Every game is important,” said Gesell. “To win the Big Ten you have to win them one at a time. We’re focused on Michigan State; it’s going to be a great matchup and it will be a fun showdown in Carver.”

Tuesday’s game is slated for an 8:06 p.m. (CT) start, and it will be televised on BTN with Kevin Kugler and Shon Morris on the call. The game is sold out.