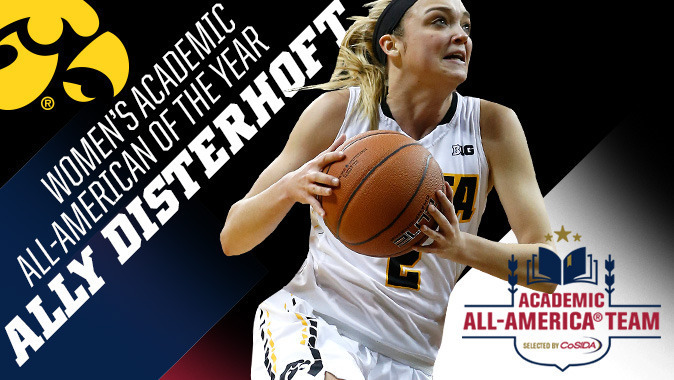 Fellow Hawkeye basketball player Jarrod Uthoff was also named Academic All-America of the Year for Division I men’s basketball. It is the first year student-athletes from the same university have earned the prestigious award.

Disterhoft, a business major studying accounting and finance, possesses the highest GPA (4.03) of all Academic All-Americans and is the youngest student-athlete to earn first team distinction this year. In 2015, she was the only sophomore nationally to be named an Academic All-American.

The Iowa City, Iowa, native is an Academic All-Big Ten honoree, Big Ten Distinguished Scholar, and two-time Presidential Committee on Athletics Scholar-Athlete. She is a WBCA Allstate Good Works Team honoree for her efforts in raising helmet awareness on mopeds in the local community.

Disterhoft, a team-elected co-captain, has scored in double figures in every game this season and in 75 of her 81 consecutive career starts. She’s led the Hawkeyes offensively in 14 of 30 games, scoring 20 points or more in nine contests. The 6-foot guard/forward paces Iowa in points per game (16.9), and is third in rebounds per game (5.5), assists per game (2.6), and steals per game (0.9).

Disterhoft is a two-time second team All-Big Ten selection (2015, 2016). She is 11th all-time in scoring (1,485), 14th all-time in three-point field goals made (106), and 18th all-time in rebounding (594) in program history. She enters the Big Ten Tournament with a .530 field goal percentage, a .359 three-point field goal percentage, and a .717 free throw percentage. Disterhoft, who was named to the Big Ten Player of the Week Honor Roll twice, averages 36.4 minutes per game and is fifth in the confer-ence and ninth nationally with 1,089 minutes played this season.