No. 6 Iowa to Compete in Arnold Challenge 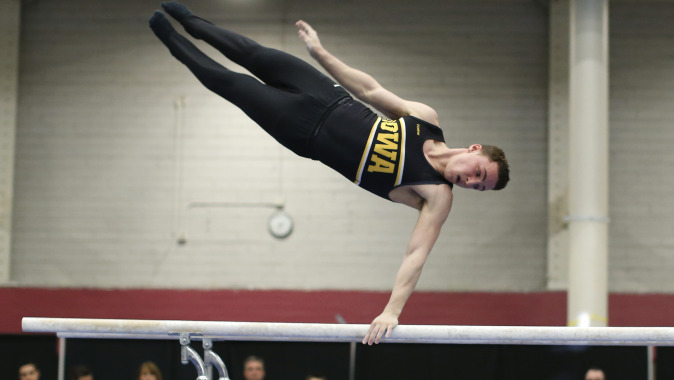 THIS WEEK:
The No. 6-ranked University of Iowa men’s gymnastics team heads to Columbus, Ohio, this weekend for the Arnold Challenge. Saturday’s event will feature Nebraska and host Ohio State. The meet is scheduled to begin at 1:30 p.m. (CT) inside the Celeste Center.

FOLLOW ALONG:
Fans can follow this weekend’s meet via live stats through the team’s schedule page at hawkeyesports.com. A live stream can be found on the Periscope app, and linked to the team’s Twitter account (@mensgymiowa).

LAST TIME OUT:
Iowa hosted No. 6-ranked Nebraska and No. 8-ranked Penn State for the first five-up five-count meet inside the UI Field House on Feb. 27. The Hawkeyes (431.150) won the meet followed by Penn State (424.000) and Nebraska (423.300). Iowa set a season-high on floor exercise with a 73.950 led by senior Matt Loochtan‘s 15.350. Loochtan claimed five event titles and set a career-high in the all-around with an 86.400. Sophomore Austin Hodges competed in his first meet of the season and led Iowa on pommel horse with a 14.500, tying for second overall.

It is Iowa’s first Gymnast of the Week award since Jan. 26, 2015, when senior Jack Boyle won the award and Loochtan’s second weekly honor of his career. He won Big Ten Freshman of the Week on April 1, 2013.

BOYLE ON HIGH BAR:
Senior Jack Boyle is tied atop the national leaderboard on high bar this season with Stanford’s Akash Modi and Air Force’s Chase Cannon. Boyle owns a three-score average of 15.233 through six meets on high bar. The Naperville, Illinois, native posted his career-high of 15.300 against Illinois on Jan. 23. As a team, the Hawkeyes rank fifth nationally on high bar with a three-score average of 72.117.

BIG TEN SHOWS POWER:
The Big Ten Conference has been dominant so far this season. Of the top 10 teams listed on roadtonationals.com, seven are from the Big Ten, including No. 3 Ohio State, No. 4 Minnesota, No. 5 Illinois, No. 6 Iowa, No. 7 Nebraska, No. 8 Penn State, and No. 10 Michigan.

Cory Paterson COMPETES IN CANADA:
During the Hawkeyes off-day on Feb. 6, junior Cory Paterson traveled to Halifax, Nova Scotia, with assistant coach Ben Ketelsen for the 2016 Elite Canada Artistic Gymnastics Championships. Paterson placed seventh in the all-around competition with a 79.100 and third on high bar with a 13.600 effort.