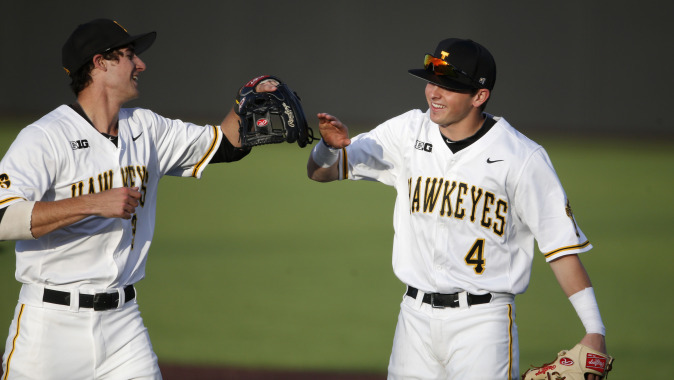 THIS WEEK
The University of Iowa baseball team heads to Emerson, Georgia, for four games at the Spring Swing at LakePointe. The Hawkeyes will face Omaha at 2:30 p.m. (CT) Friday, Seton Hall at 3:30 p.m. Saturday, Savannah State at noon Sunday, and Point University at 1:30 p.m. Monday. All four games will be played at Perfect Game Park South at LakePointe.

GAME COVERAGE
? Iowa’s live audio stream of the three games will be available on Hawkeye All-Access. Zach Mackey will be on the call. Steve Duncan or Ray Gilmore will provide color commentary. ? Live statistics will be available at www.hawkeyesports.com and fans can follow the action via Twitter/UIBaseball.

NOTABLES
? Sophomore Austin Guzzo is hitting .833 with five RBIs and six runs scored over his last two games. He has five hits in six at-bats and has a 1.000 slugging and .900 on-base percentage.
? Senior Joel Booker is leading the team with a .359 average with 14 hits in 39 at-bats. The North Carolina native has five doubles; he had 10 extra base hits all of his junior season.
? Booker is also pacing the team with four steals (in four attempts) this season. The outfielder was 9-for-14 in stolen base attempts last season.
? Sophomore Cole McDonald picked up his first career win against Northwestern College, tossing two shutout innings. Shane Ritter, Sam Lizarraga, and Jared Mandel combined for the seven-inning shutout.

SETON HALL NOTABLES
? The Pirates have won four of their last five games to even their record at 6-6 overall. Seton Hall beat Indiana twice (7-2, 6-4 (10) last weekend and lost 9-3 to Ohio State at the Snowbird Classic.
? Seton Hall is hitting .266 as a team and is averaging 4.2 runs per game. Five Pirate players are hitting above .300 with Mikael-Ali Moques leading the team with a .375 average with eight runs, five doubles, and eight RBIs.
? The Pirates, who have a 4.63 team ERA, will start freshman LHP Cullen Dana, who is 1-0 with a 2.45 ERA in two starts. He has allowed three runs on four hits in 11 innings and has 11 strikeouts to four walks.

SERIES RECORD
? Iowa leads the all-time series over Nebraska-Omaha, 7-4. The Hawkeyes last faced the Mavericks in 2014, winning 7-1 in Port Charlotte.
? The Hawkeyes are 0-1 all-time against Seton Hall, dropping a 2-0 decision during the 2011 season in St. Petersburg, Florida.
? Iowa has never faced Savannah State or Point University.

BREAKING DOWN 28-0
Iowa opened its 2016 home schedule with a 28-0 blasting of Northwestern College on March 8 at Banks Field. The 28 runs are the second-most in a single game in school history.
? All nine starters and 11 players tallied an RBI in the game. Iowa had 24 RBIs among the 28 runs.
? Nine different players tallied a hit, eight posted multi-hit games, and 13 different players scored at least one run. Iowa drew 11 walks in the contest.

IN THE B1G
? Iowa is second in the Big Ten with 64 runs scored and has the fifth-best on-base percentage (.375) and fifth-most RBIs (57). The Hawkeyes lead the conference in walks (52).
? Senior Nick Roscetti is tied for third in runs scored (11) and Booker is tied for sixth with four steals.

SOPHOMORE C.J. Eldred…
? has been Iowa’s most consistent pitcher, going 1-0 with a 1.00 ERA in three appearances (two starts). Eldred ranks sixth in the Big Ten in ERA and second in opposing batting average (.129).
? recorded a quality start at Southern Illinois, throwing nine innings of two-hit, one run ball. He had a no-hitter through 7 2/3 innings, but wasn’t involved in the decision.
? picked up his first career win against Dartmouth, allowing one run on four hits over five innings, fanning five.
? sat out the 2015 season after transferring from Indiana University, where he redshirted in 2014.
? is the son of former Hawkeye first round MLB Draft pick and Major Leaguer Cal Eldred.

SENIOR Tyler Peyton…
? logged a quality start at Dallas Baptist, going 6 1/3 innings, scattering two hits, and striking out six. Both runs were unearned, as he took the loss.
? is expected to take the ball in game two this weekend against Seton Hall.
? did not pitch at Southern Illinois due to forearm tightness.
? is 12-7 in his Iowa career with a 3.89 ERA in 32 starts. Peyton has 15 quality starts and has pitched into the seventh inning 14 times in his career.
? has logged 180 1/3 innings in two-plus seasons, where he has 126 strikeouts to 59 walks.
? earned third-team All-America honors by D1Baseball.com and the USBWA as a junior.
? has the best change-up in the Big Ten Conference according to Baseball America.

TEAM CAPTAINS
Seniors Jimmy Frankos, Calvin Mathews, Tyler Radtke, and Nick Roscetti are the team captains for the 2016 season. Radtke is in his second season as team captain.