Hawkeyes Say No to Status Quo 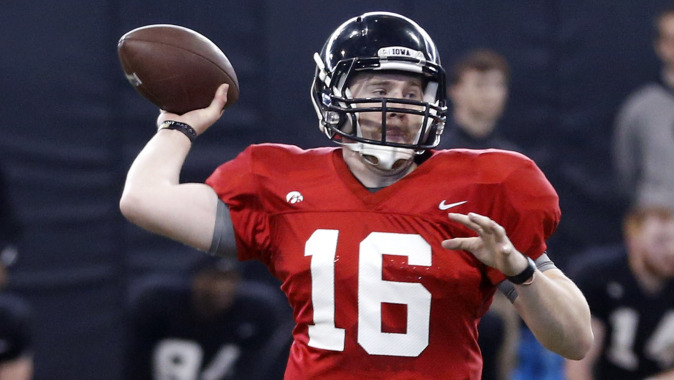 IOWA CITY, Iowa — Status quo isn’t a recipe the University of Iowa football team will use for a successful season in 2016.

If improvement isn’t made during 15 spring practices and beyond, says senior quarterback C.J. Beathard, you can forget about a repeat of 12 straight regular season victories, a Big Ten West Division championship, and an appearance in the Rose Bowl Game.

For him, that means 2,809 passing yards will perhaps have to surpass 3,000, 17 touchdown passes will need to be in the neighborhood of 25, and a 61.5 completion percentage should hover around 65 percent.

“If we play the same as we did last season we can’t count on having a great season,” Beathard said. “After the season we had, there are teams out there that are going to be gunning for us, so we’re going to have to improve as individuals and as a team. As long as we continue to improve we should have a good season next year.”

Among the hot topics for a Hawkeye offense that returns 21 letterwinners and six starters is the health of Beathard, who will make his 16th career start Sept. 3 against Miami (Ohio). Beathard was hobbled most of 2015 with a groin injury that required offseason surgery. After two weeks of spring ball, he says he is “getting better and better.”

“I have been doing everything — bootlegs, sprint-outs, stuff like that,” Beathard said. “Maybe we haven’t been doing as much of that as we usually do because of (the surgery), but (offensive coordinator Greg Davis) will throw it in there and I will do it fine.”

Beathard elected surgery over a “rest-a-few-weeks” approach that wouldn’t guarantee a complete recovery.

“I felt I might as well get it over with and move on,” Beathard said.

Beathard was named second-team All-Big Ten Conference after leading the Hawkeyes in total offense with 217.6 yards per game in 2015. He was honored as Iowa’s most valuable offensive player and named permanent team captain.

His experience is a plus. But when Beathard looks around the huddle, he no longer sees leading rusher Jordan Canzeri (984 yards, 12 touchdowns) or his No. 2 and No. 3 receiving targets in tight end Henry Krieger Coble (35 catches) and wide receiver Tevaun Smith (32 catches).

“That’s what spring is for, trying to figure out who is going to step up,” Beathard said.

“Right now Akrum and LeShun are doing a great job,” Beathard said. “It doesn’t matter who I’m handing the ball off to — I’m just giving them the ball and I trust LeShun and Akrum to make big plays. They both have different styles of running and both are good at it.”

While Krieger Coble and Jake Duzey (36 receptions in 2014) are no longer lining up at tight end, senior George Kittle (20 receptions, six touchdowns) returns and juniors Jon Wisnieski and Peter Pekar and sophomore Jameer Outsey are battling for playing time.

“All three of those guys are getting reps with the 1s and 2s and they are all showing good signs,” Beathard said. “It’s just a matter of them getting more reps and who will take charge.”

Beathard’s favorite receiving target is back in the form of senior Matt VandeBerg, whose 65 receptions were 30 more than the next Hawkeye. Of Iowa’s 17 touchdowns through the air in 2015, six went to Kittle and four to VandeBerg.

“We lost a few guys who were good at receiver and we’re going to miss those guys. That’s how football is and guys have to step up,” Beathard said. “(Sophomore) Jerminic (Smith) is stepping up, (sophomore) Jay Scheel has been stepping up. We’re going to have to have veteran guys like (senior) Riley (McCarron) and Matt step up even more.”

When Beathard glances at the Rose Bowl banner hanging in the Stew and LeNore Hansen Football Performance Center, he reflects on a fun and historic 2105 season. It also serves as inspiration.

“We want to build off that and come back extra-motivated,” Beathard said.