Big Ten/Big12 Invite Up Next for Iowa Rowing 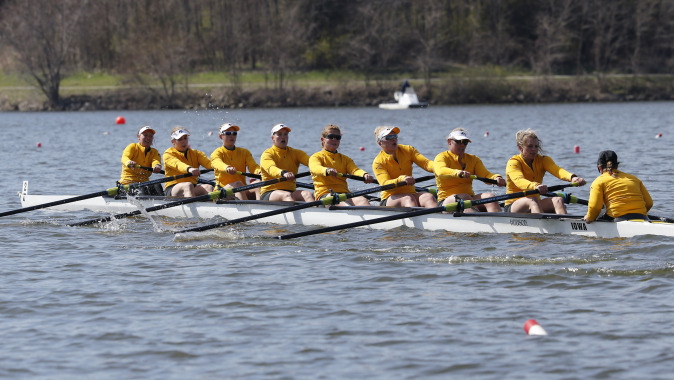 REGATTA RUNDOWN
The 19th-ranked University of Iowa rowing program travels to Baraboo, Wisconsin, to compete in the Big Ten/Big12 Double Dual on Devil’s Lake Saturday, April 23. The Hawkeyes meet Kansas and Wisconsin’s lightweight crews in the morning session beginning at 8:30 a.m. (CT). In the afternoon session, which begins at 1 p.m., Iowa will face Minnesota and Oklahoma.

FOLLOW THE ACTION
Hawkeye fans can follow along with the Big Ten/Big12 Double Dual on Twitter @IowaRowing or through live results. A link to live results is available on the rowing schedule page at hawkeyesports.com.

THE COMPETITION FIELD
? Kansas most recently competed at the Knecht Cup in New Jersey, where it won three medals. The team’s 2V4+ was named Big 12 Boat of the Week after going undefeated in the competition.
? Oklahoma is receiving votes in the latest CRCA Coaches poll. The Sooners met strong competition at the Clemson Invitational last weekend, earning fourth place finishes in the 1V4+ and 2V4+ ahead of UCLA and Penn Sunday. On Saturday, the 1V4+ upset then-ranked No. 20 Louisville to finish third.
? Minnesota is also receiving votes in the latest release of the national poll. The Gophers last competed at the Big Ten Double Dual hosted by the Hawkeyes on April 9. They fell to then-ranked No. 13 Indiana, 39-33, in the morning session and to then-ranked No. 16 Iowa, 42-30, in the afternoon session.
? Wisconsin’s lightweight program is not an NCAA sanctioned team.

CALIFORNIA PROGRESS
Iowa competed in the Lake Natoma Invitational last weekend against nationally elite crews in No. 1 Brown, No. 2 California, Berkeley, No. 7 Stanford, No. 12 Wisconsin, No. 15 Gonzaga, and No. 18 Notre Dame in addition to Sacramento State and Loyola Marymount.

In the Saturday morning session, the Hawkeyes posted runner-up finishes in the 1V4+ and 2V4+. The crews returned for Saturday afternoon racing, where they finished runner-up to top-ranked Brown in each event, but ahead of Sacramento State. A runner-up 1V4+ result highlighted Sunday session racing for the Hawkeyes.

HOMERUN AT HOME
The Hawkeyes hosted their first home event since the 2014 season against No. 12 Wisconsin and Minnesota on April 9 at Lake Macbride in Solon, Iowa. Iowa fell to Wisconsin, 47-25, in the morning session before rebounding with a win over Minnesota, 42-30, in the afternoon session. The 3V4+ crew excelled with a 35.8 second winning margin over the Gophers to highlight competition in the second session. The boat, comprised of Arika Henry, Hannah Rochford, Skylar McSorley, Rachel Jipp and coxswain Marija Pritchard, posted the largest margin of victory on the day. Iowa’s 1V8+, 1V4+, 2V4+, 1N8+, and 2N8+ crews also won their respective races to help secure the win over the Gophers.

SPARKLING START
Iowa opened the spring season with a bang, winning three of seven events and finishing second in front of No. 15 Louisville and behind No. 12 Indiana, a team that finished 11th in the last two NCAA Championships, at the Big Ten/ACC Double Dual on April 3. The 1V4+ crew of Baillie McCunn, Danielle Bender, Sarah Powell, Bianca DiBellonia, and Faith Wieland (coxswain) posted the first, first place result for the Hawkeyes this year, finishing 6.6 seconds ahead of runner-up Louisville and 7.1 seconds in front of Indiana. The 1N8+ and 2N8+ crews dominated their fields, finishing first by 10 seconds and 40 seconds, respectively.

BIG TEN STRENGTH
Six of eight rowing programs in the Big Ten Conference are represented in the CRCA/USRowing Coaches Poll, with five top 20 teams and one collecting votes. Three-time defending NCAA Champion Ohio State is ranked No. 3, followed by No. 10 Michigan, No. 11 Wisconsin, No. 14 Indiana, and No. 19 Iowa. Minnesota is receiving votes in the most recent release. The conference saw four programs compete at the NCAA Championships last year and boast the national champion in each of the last three seasons.

FALL = FULL OF HIGHLIGHTS
? The Hawkeyes met several training benchmarks and made strides in the fall season.
? Iowa opened at the Head of the Des Moines, earning the collegiate trophy with top finishes in women’s collegiate eight, collegiate four, and novice eight events. The team’s top eight posted the fastest time across all levels of the competition field.
? The Hawkeyes also hosted elite competition in Indiana, welcoming the Hoosiers for two days of scrimmage action. The top two varsity eight crews from each program raced in a time trial, or head race, format on day one. The Hawkeyes held their own, topping Indiana in each 4,000-meter piece.
? The second day of scrimmaging included five 1,000-meter match races. The Iowa varsity eights traded wins with the Hoosiers, while the Hawkeye fours dominated the day, winning all five races in the 1V4+ and 2V4+ divisions.
? Seeing a top program nationally prepared the Hawkeyes for their next challenge at the historic Head of the Charles Regatta. The team’s top varsity eight and four crews headed east to for the first time since 2007 and met the challenge with impressive results.
? The varsity four placed sixth overall and third among collegiate crews behind Virginia and Brown, teams that placed first and third in the event at the NCAA Championship in 2015. Iowa’s varsity eight placed ninth in a field of 32, which also included top NCAA programs from all the elite conferences. Both finishes were the best ever recorded by Hawkeye crews in the history of the 51-year-old event.
? Iowa also sent crews to the Jayhawk Jamboree, jumping up a level to fill the roster spots left open by the student-athletes rowing in Boston.
? In the varsity eight, the Hawkeyes faced top crews from Kansas, Kansas State, and Tulsa, and earned an impressive third place finish. In the varsity four, Iowa’s top crew was the runner-up. As at the Head of the Des Moines Regatta, the novice eight capped the day with a win.

ELITE INVITATIONS
Two Iowa rowers received elite invitations to national rowing camps and had the opportunity to put the Tigerhawk on the map in the summer months. Morgan Grastorf and Gemma Kerr were selected to attend the 2015 U.S. Women’s Under 23 National Team Selection Camp and the 2015 Junior Canadian National Team Selection Camp, respectively.

During his coaching career, Carter has earned more than 50 championship medals, and over the last 14 years, he has coached eight All-Americans and 36 National Scholar-Athletes. Before becoming a Hawkeye, he turned Miami into a nationally-ranked program, and led Clemson to its first-ever ACC title and NCAA Championship appearance.

UP NEXT
Iowa competes in its last regatta of the regular season on Sunday, May 1. The Hawkeyes will face Tennessee, Clemson, and UCF in Knoxville, Tennessee.