1)     The Hawkeyes would lay down, roll over, and limp their way through the final three games, or
2)     They would put their foot down and rescue a season that hit a momentary snag.

Ekakitie put his foot down. So did the rest of the Hawkeyes. 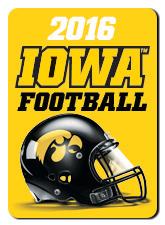 In the last three games — all Hawkeye victories and two over nationally ranked opponents — Iowa allowed 616 yards and 23 points COMBINED.

Seven days after the forgetful trip to Pennsylvania, Iowa shocked Michigan, the No. 2 team in the nation, with a last-second 33-yard field goal to claim a 14-13 victory. More importantly, the Hawkeye defense allowed just 201 yards to a team that averaged 497.4 per game. The Wolverines entered the contest averaging 251.7 rushing yards per game, but picked up 98 on the ground Nov.12 in Kinnick Stadium.

Iowa kept its foot on the gas the next Saturday at Illinois, even though it was already bowl eligible for a 15th time in the last 16 seasons. The Hawkeyes won, 28-0, for their first shutout in 85 games. They also limited the Illini to 198 yards, 61 on the ground.

The Hy-Vee Heroes Game arrived yesterday with Nebraska averaging 401.5 yards of offense and 186.2 on the ground. The 15th-ranked Cornhuskers won their first seven games and came into Iowa City with a 9-2 record.

Iowa held them to 90 rushing yards on 31 carries.

“It’s hard to play good defense if you can’t slow the run,” UI head coach Kirk Ferentz said. “To bounce back — it’s not like we put a new scheme in or had new players — we have prideful guys and they have done a great job for three weeks.”

Establishing the run and stopping the run are crucial in any Big Ten game and that fact was magnified against Nebraska. The Hawkeyes did their part, coming out with 295 total yards and 187 rushing yards by halftime. They finished with 408 yards, while senior LeShun Daniels, Jr., ran for 158 yards on 29 carries with a long of 56 and junior Akrum Wadley picked up 105 yards on 11 carries with a long of 75.

The defense was equally stout. The Cornhuskers were held to 30 yards on the ground in the first quarter (2.7 yards per attempt) and 90 for the game (2.9 per attempt). Only one of the first 11 Nebraska rush attempts went for more than five yards; six went for two yards or less. Of Nebraska’s 22 first-half rush attempts, 12 gained two yards or less.

“It was a matter of our defense taking positive steps,” UI senior defensive tackle Jaleel Johnson said. “After Penn State we could have thrown in the towel and said that’s the season or we could pick ourselves up and keep moving forward and that’s what we did.”

Iowa led 20-3 at halftime and its first two scoring drives spanned 51 and 11 seconds. That would point to more plays for an opponent: Nebraska ran 39 to Iowa’s 27, but the Hawkeyes still enjoyed an offensive advantage of 152 yards at the break.

For the game, Iowa held Nebraska 184.5 yards below its offensive average and 96.2 yards below its season average for rushing yards. That’s a positive, reoccurring theme to the Hawkeyes.

For the sixth time in Ferentz’s coaching career, Iowa has finished a regular season with three or more consecutive victories. Those teams were doing something right in the month of November.

“You learn a lot about yourselves in November,” Ferentz said. “I don’t know if we could have gone any lower than we did three weeks ago. We had a tough loss to open the month, but what these guys have done, day in and day out, the past three weeks, has been amazing to watch.”

Iowa’s 30-point victory over Nebraska — its first over the Cornhuskers in Kinnick Stadium since Sept. 12, 1981 — means there will be one more game in postseason.

“We have to rest and recover, it’s been a long season,” Ekakitie said. “As soon as we get back to work we have to get back to basics. If you’re not improving, you’re getting worse, you can’t fool yourself.”

The Hawkeyes are one of the hottest teams in the Big Ten, if not the nation.

And that’s no fooling.