That describes how Kelsey Drake capped her junior season with the University of Iowa swimming and diving team.

First came the elation when Drake achieved a life-long goal at the Big Ten Championships on Feb. 19 at the Campus Recreation and Wellness Center.  Drake swam a career best in the 200-yard butterfly to set a school record and post a strong time toward qualifying for the NCAA Championships.

She started the night swimming the butterfly leg of the Hawkeyes’ 200-medley relay. Then she watched and fed off the energy from the 800-free relay as it placed fourth.

“I had the fastest split I have ever had in the 50 fly,” said Drake. “I knew that was a good sign for the rest of the meet and I was excited to get up and race later that night. I tried not to think about the race too much because I freak myself out. Getting on the block, I tried to relax and enjoy the moment.”

What followed was Drake’s time trial where she posted a career-best and Iowa school-record time of 1:55.89, shattering her previous school record of 1:57.87.  It was a time the coaches felt confident would get Drake into the NCAA Championships for the first time.

“I was surprised and happy,” said Drake. “I put in all that work for so long and that was my goal in swimming since I was an age-group swimmer. I knew that’s what I wanted to achieve and getting to that point was amazing. I was on cloud nine.” 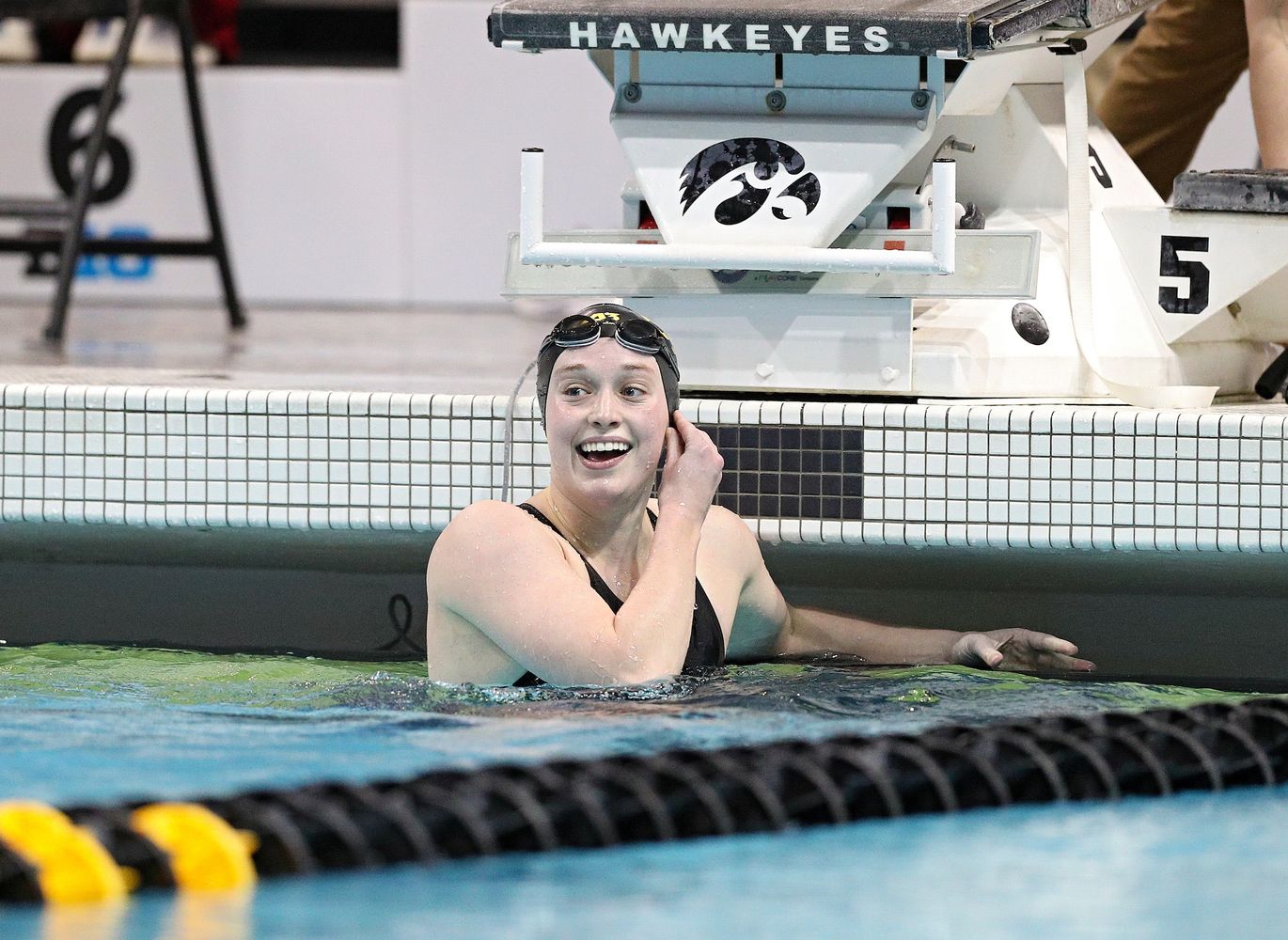 Drake was preparing to travel to Athens, Georgia, to compete in her first NCAA Championships. The week before she was set to depart, things at the national level started going downhill.

“I was on the phone with my mom,” said Drake. “We were talking about (how the tournaments got canceled) and she had the news on when a reporter announced it on television. I was on my way to get dinner and I broke down.”

Drake’s season was over because of the coronavirus pandemic.

“I had no idea how big it was going to get and how fast everything was going to shut down,” said Drake. “I was devastated, and the next couple of days I was trying to get over the news and come to terms with it.

“Even though I knew it was for the better and it was what needed to happen, it is hard to know that I worked so hard for this and it was taken away.”

Drake was heartbroken for her Hawkeye teammates, especially senior Hannah Burvill, who was set to close out her career at the NCAA Championships.

“We talked and hung out that night,” said Drake. “(Hannah) didn’t know Big Tens would be her last meet as a Hawkeye.  It was sad not being able to end the season the way we wanted.”

Barring something unforeseen, Drake is motivated that she’ll have another chance to qualify next year. Five of Iowa’s six NCAA qualifiers — Drake, Sam Tamborski, Anze Fers Erzen, Daniel Swanepoel, and Mohamed Neuman — will have a chance to earn NCAA berths during the 2020-21 season.

“I am ready to get back into the pool to start training and get ready for that,” said Drake. “I know we have a hopeful future in this program, and I am excited to be back in the pool with my teammates to build on the progress we have made.”