IOWA CITY, Iowa — When Spencer Lee says he is prepared to wrestle seven minutes or more, you assume he is talking about one match.

But the way the two-time NCAA champion/Hodge Trophy winner/Sullivan Award winner has approached his fourth season as Iowa’s 125-pounder, the “seven minutes or more” comment might be more applicable to a season’s body of work.

The top-seeded Lee enters the NCAA Championships in St. Louis with a 7-0 record and match stoppages in all seven. Five of the wins have been by fall, ranging from 23 seconds to 2-minutes, 27-seconds. The other two wins were by technical fall in 4:30 and 5:33.

“I go out to score points and that’s all I care about,” Lee said. “What’s the next point? If I didn’t wrestle a full match all year that would be great. If I do, it doesn’t matter. I’m ready to go no matter what. Seven minutes or more if needed. That’s the mentality instilled in me. Scoring points every second of every part of the match and getting ready for what’s next.”

Lee is coming off his second consecutive Big Ten title and has won 30 straight matches. In the last two seasons there has been one wrestler (Michigan’s Jack Medley) who has lasted an entire seven minutes against Lee. Lee won that bout, 8-1.

“[Lee] knows the work comes before the fruits of the labor are realized,” Iowa head coach Tom Brands said. “He is a ferocious, ferocious competitor, do not mistake that. Do not forget that.” 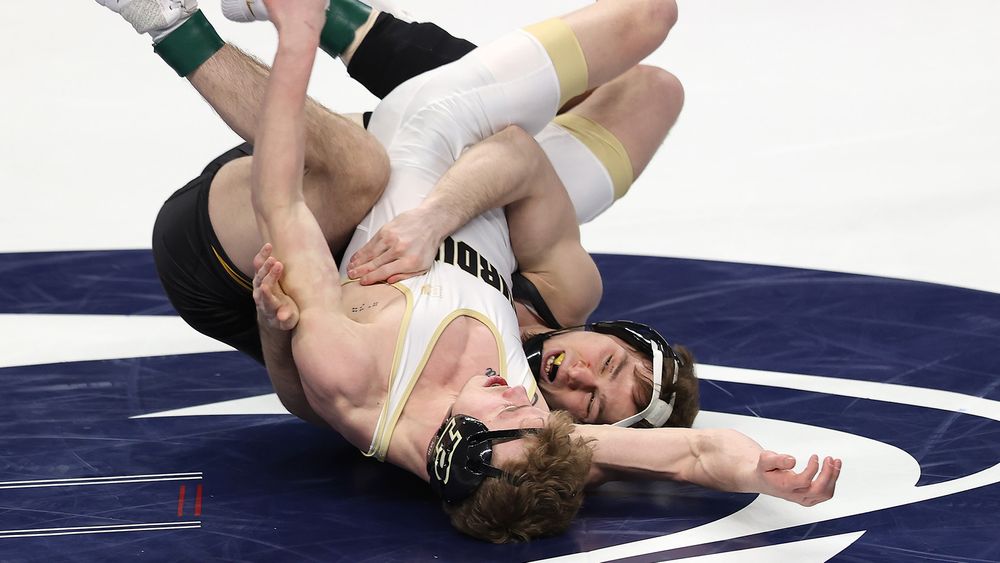 “Big time wrestlers show up for big time matches. The bigger the stakes, the better I wrestle. I have always been like that. I believe I have been like that since I was a little kid.”

Lee is respected by his peers and he respects his peers. So, what’s not to like about the native of Murrysville, Pennsylvania? For Hawkeye fans, the most encouraging news — and both coach and competitor agree — that when it comes to Lee’s dominance, you ain’t seen nothing yet.

“Every year the goal is to get better, compete harder, train smarter,” Lee said.

Lee continues to heed advice that his mother, Cathy, conveys before every big tournament: “stay safe, stay humble, kick butt.” He has emphasized the “kick butt” segment. Lee is 70-5 with 59 bonus-point wins in his career and has been particularly effective at the NCAA Championships. Lee won his first national title as a true freshman by going 5-0 with two falls and two technical falls. He defeated Nick Suriano of Rutgers in the final, 5-1. Lee defended that national title as a sophomore in 2019 when he went 5-0 at the NCAA Championships with a fall, technical fall and major decision. He defeated Jack Mueller of Virginia in the final, 5-0.

“Big time wrestlers show up for big time matches,” Lee said. “The bigger the stakes, the better I wrestle. I have always been like that. I believe I have been like that since I was a little kid.”

One thing that has eluded Lee is being part of an NCAA team championship. “We were going to win a national title (in 2020) in my mind,” Lee said. He and nine other Hawkeyes have an opportunity on March 18-20 in the Enterprise Center in St. Louis. Four Iowa student-athletes — Lee, Jaydin Eierman (141), Alex Marinelli (165) and Michael Kemerer (174) — are top seeds at their respective weight class.

“We’re ready to go, we’re excited and we’re looking forward to finally getting it done,” Lee said. “Winning a national title as a team and individuals.”