THIS WEEK
Iowa kicks off the Iowa Corn Cy-Hawk Series on Thursday with its home opener against Iowa State. Kick is set for 6:04 p.m. (CT) at the Iowa Soccer Complex. Admission is free. The Hawkeyes take on another Big 12 opponent on Sunday with a 1 p.m. (CT) match against Kansas at Rock Chalk Park.

IOWA CORN CY-HAWK SERIES
The Cy-Hawk Series is in its 17th season in 2021-22, being sponsored for the 10th time by Iowa Corn.

The Iowa Corn Cy-Hawk Series tracks the head-to-head match-ups between the Cyclones and Hawkeyes with each victory earning points toward the overall series championship.

The series awards two points (except football, which is worth three) to the winning school in each head-to-head match-up between the two institutions. Additionally, one point is awarded to an institution if the graduation rate of its student-athletes is greater than the national average as reported each fall by the NCAA.

A commemorative Cy-Hawk Series Cup, which stands 31 inches tall and weighs 19 pounds, is displayed on the winning team’s campus for an entire year after a victory. Replica cups are also presented as “traveling trophies” for individual victorious teams in the head-to-head competition.                Iowa Corn is proud to sponsor the Iowa Corn Cy-Hawk Series because it’s a tribute to the hard-working student athletes who give it their all in their sport and fields of study. Just like hard-working Iowa farmers who work to produce some of the best corn in the world.

It’s more than a series. IT’S EVERYTHING.

GETTING THINGS ROLING
Freshman Kenzie Roling has scored in every contest this season. Roling scored the tying goal against DePaul and the game-winner against No. 18 Saint Louis, as well as notching goals in each of Iowa’s exhibition wins. Her two regular season goals came on four shots, and her four points lead the team heading into Week 2. 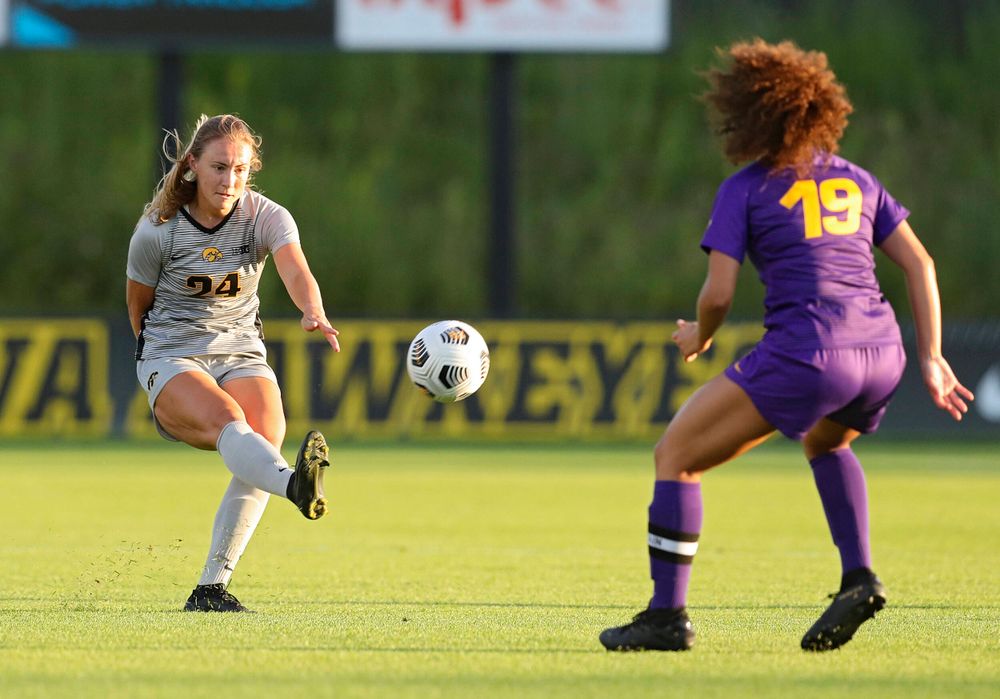 WHO’S IN GOAL?
Sophomore Macy Enneking was the only unanimous Big Ten All-Freshman Team selection last season and earned Big Ten Tournament Most Outstanding Defensive Player accolades for allowing just one goal in four games at the conference tournament. She tallied 52 saves across 11 games and averaged a conference-best .912 save percentage, allowing just 5 goals in 956 minutes played. The Hilliard, Ohio native pitched shutouts in each of Iowa’s two exhibition contests this preseason.

Enneking sat out last week due to injury. Redshirt junior Monica Wilhelm filled in without issue, grabbing four saves and helping lead the Hawkeyes to a shutout victory against No. 18 Saint Louis.

Roling, a freshman from Waverly, Iowa, scored goals in each of Iowa’s wins last week at DePaul and St. Louis. Her first-half goal against the Blue Demons evened the score 1-1 and her first-half goal against the Billikens proved to be the game-winner in a 1-0 Hawkeye win. Including Iowa’s preseason exhibitions, Roling has scored in each of the Hawkeyes’ four games. Following last week’s performance, she was also an honorable mention on TopDrawerSoccer’s Team of the Week.

Wheaton, a senior team captain from Chandler, Arizona, played all 90 minutes in both wins last week, leading a defense that allowed just one score and five shots on goal. The Hawkeyes shutout a nationally ranked Billikens team that was held scoreless just two times in 17 games last season.

Big Ten Preseason Honors List. Iowa was picked to finish seventh out of 14 teams in the preseason

LAST GAME
The Hawkeyes opened the regular season with a pair of road wins at DePaul and No. 18 Saint Louis. Iowa dropped a goal in the opening minutes against the Blue Demons before rallying to a 2-1 lead at the half. The Hawkeye defense pitched a shutout in the second half to seal the win before holding Saint Louis scoreless for the 1-0 win. Freshman Kenzie Roling knocked in the tying goal against DePaul as well as the winning score against the Billikens. Forward Courtney Powell scored the go-ahead goal against the Blue Demons just before the half.