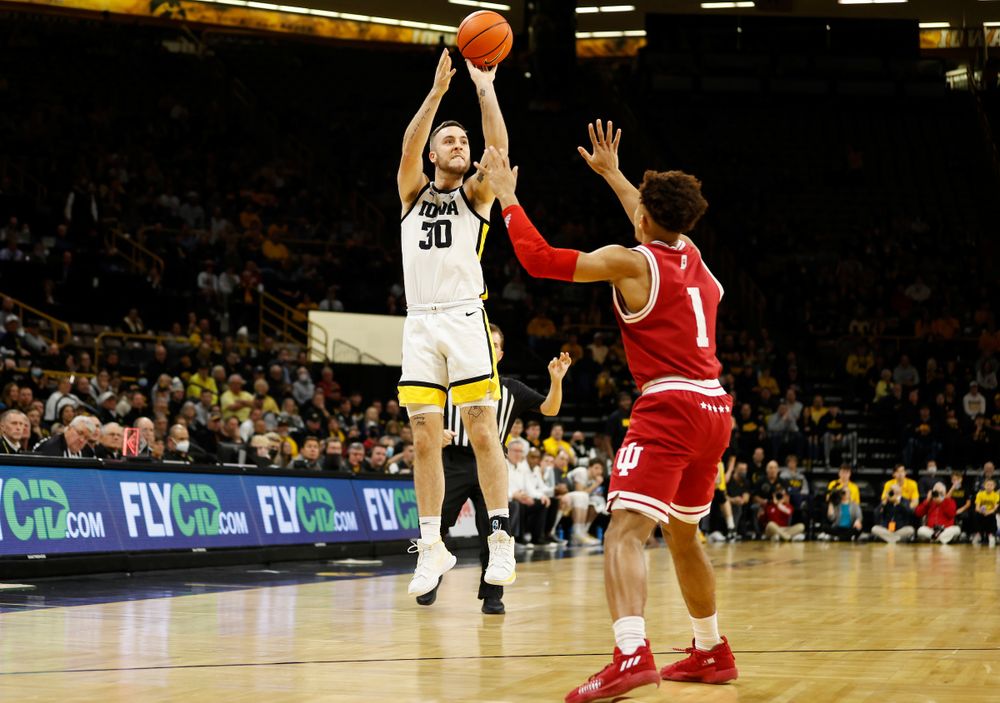 TV: Thursday’s primetime game will be televised nationally on FS1. Jason Benetti and Bill Raftery will call the action.

Iowa overcame a nine-point deficit with five minutes remaining capped by a Jordan Bohannon 3-pointer with 1.1 seconds left to lift Iowa to an 80-77 win over Indiana on March 12, 2022, in the semifinals of the Big Ten Tournament.

Penn State’s Jalen Pickett (26) and Andrew Funk (20) combined for 46 points in an 83-79 win over Iowa on Sunday in State College, in the only regular season meeting between the two teams.

Fifth-year senior Filip Rebraca has taken his game to another level this season. Rebraca ranks first on the squad in blocks (20) and field goal percentage (.603), and second in rebounds (8.4) and points per game (14.1). He is pulling down 3.29 offensive boards per outing, third best in the Big Ten and 32nd nationally. His field goal percentage (.603) ranks 30th in the country.

Rebraca netted career point No. 1,500 against Eastern Illinois (Dec. 21). He has scored 405 points the last two seasons as a Hawkeye (50 games) and 1,129 points in three seasons at North Dakota.

The under-sized center (6-foot-9) has netted double figures a team-best 11 times this year and posted four double-doubles, tying for fourth most in the league. He has rejected multiple shots in five games this season and his 1.43 blocks per game ranks sixth in the conference.

Rebraca had another stellar outing versus Eastern Illinois. He tallied a game-best 24 points, collected a career-high five steals, and snagged eight rebounds. At Nebraska, he totaled 16 points and grabbed a season-high 13 rebounds for his fourth double-double of the season.

Murray is averaging a team-best 20.4 points and 9.8 rebounds per outing. Murray has increased his scoring average by 11.7 points per game this season compared to last year. Murray did not play in four contests in December (Iowa State; Wisconsin; Southeast Missouri State; Eastern Illinois) due to a lower body injury.

Murray returned to the lineup last Thursday at Nebraska, registering game bests in points (17) and blocks (3), while also clearing eight rebounds. He scored 22 of his game and career-best 32 points in the second half at Penn State on Sunday.

McCaffery is averaging 7.3 points and 3.9 rebounds per game, and has made 16-of-42 (.381) from 3-point range this season. He posted 14 points, bolstered by shooting a perfect 8-of-8 from the foul line, in his first start of the season on Dec. 8 against the Cyclones. He registered his first career double-double versus Georgia Tech (10 points; 10 rebounds) and notched his second double-double versus Wisconsin (17 points, 10 rebounds). He did not play in Iowa’s nonconference finale on Dec. 21 (Eastern Illinois) due to a wrist sprain.

McCaffery has only missed two free throws this season (23-of-25). He made 19 consecutive free throws from Nov. 29 to Dec. 29, before missing his first and only attempt at Penn State on Jan. 1.

TAKING THE NEXT STEP

Patrick McCaffery averaged 10.5 points and 3.6 rebounds as a sophomore. As we approach the midway point of his junior season, McCaffery is averaging 12.8 points and 4.8 rebounds.

He has netted double figures 10 times. McCaffery scored 21 points in back-to-back games a month ago versus North Carolina A&T and Clemson. He poured in a personal-best 24 points — eight in overtime — against the Badgers. He then tallied 20 points and grabbed a career-best eight rebounds against Southeast Missouri State.