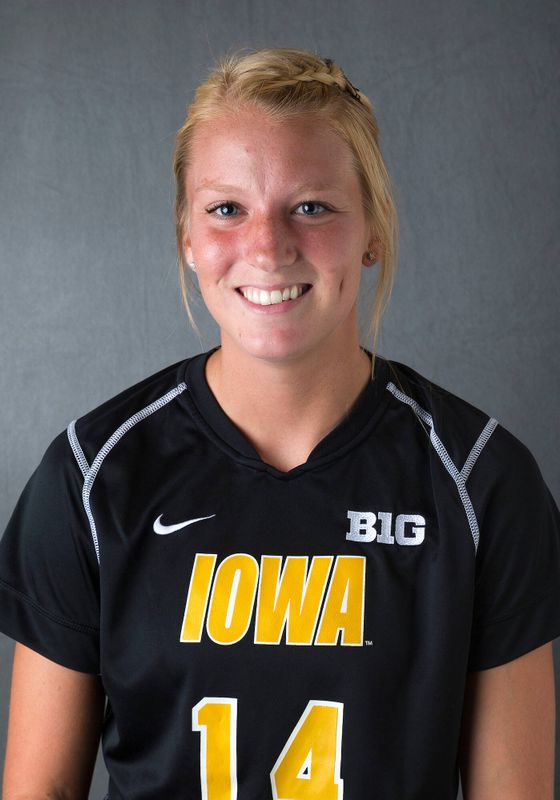 2014 as a Senior… Started all 21 games played in, logging 1,779 minutes as a defensive midfielder… recorded 25 shots on the season… scored her first goal as a Hawkeye and first career game-winner in a 3-1 home victory over Purdue… did not play in Iowa’s 1-0 victory at Minnesota due to a concussion… member of a Hawkeye defense that set the school record for most shutouts in a season (12) and fewest goals allowed in a regular season (16)… Iowa’s defense ranked second in the Big Ten in shutouts and fourth in goals against average (0.75)… Academic All-Big Ten honoree… named to the NSCAA Scholar All-North/Central Region third-team… letterwinner.

2013 as a Junior… Started all 23 matches, playing a team-high 2,105 minutes… 1-of-2 Iowa positional players to play every minute… key member of a Hawkeye defense that ranked second in the Big Ten in shutouts (10) and fourth in goals against average (1.07)… member of an Iowa team that posted a school-record 15 victories, advanced to its first Big Ten Tournament championship game and earned the program’s first NCAA Tournament appearance… letterwinner.

2012 as a Sophomore at Milwaukee… Played every minute of the season at central defender… first position player to not come off the field for the Panthers in a season since 2006… played a key role in seven shutouts… logged an assist and three shots on offense… made a team save at Green Bay… assisted on the game-winning goal at Green Bay… took a season-high two shots vs. Oklahoma State.

2011 as a Freshman at Milwaukee… Horizon League All-Newcomer Team… first freshman since 2008, and 12th overall, to start every game for Milwaukee… in 22 starts at central defender, helped Panthers to 12 shutouts and 0.67 goals against average — 18th-best in the country… logged 1,927 minutes, playing every minute in 19 games… added one goal on 10 shots on the year… score came at Cleveland State… had a season-high three shots vs. Western Illinois.

High School… Four-year all-conference and all-area selection at Andrew High School… earned all-conference and all-area awards as a sophomore, despite being limited to eight games with an injury… had 17 goals and eight assists as a freshman and 22 goals and nine assists as a junior… helped her team to four regional championships… broke school record with 41 career goals… team won the U17 US Club National Championship in 2010.