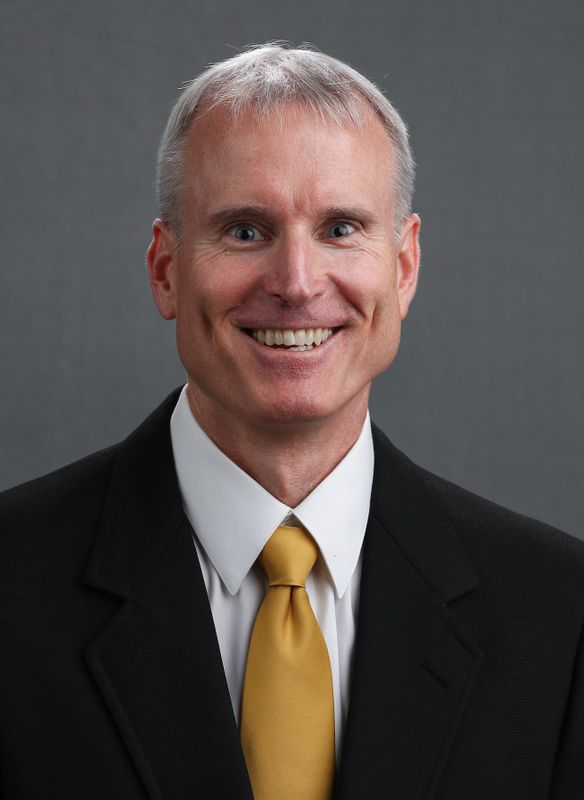 Marc Long is entering his 17th season as head coach for the University of Iowa swimming and diving team and 16th leading both the men’s and women’s programs.

During his tenure as head coach of both teams, 161 school records have fallen and 409 Hawkeyes have automatically or provisionally qualified for the NCAA Championships. Iowa has posted 13 top 40 NCAA finishes (six men, seven women) since 2004.

The women’s team has been recognized with NCAA Public Recognition in 2015 and 2017 for a perfect Academic Progress Report (APR) as a team — a highly selective award given to the top 10 percent of teams across the country.

On campus, Long was one of the founders of the Hawkeye Health C.A.R.E. program — a unique shadowing and mentoring program for UI student-athletes.  He also started the Hawkeye Business Social, a professional development and networking event for Hawkeye swimming and diving student-athletes. 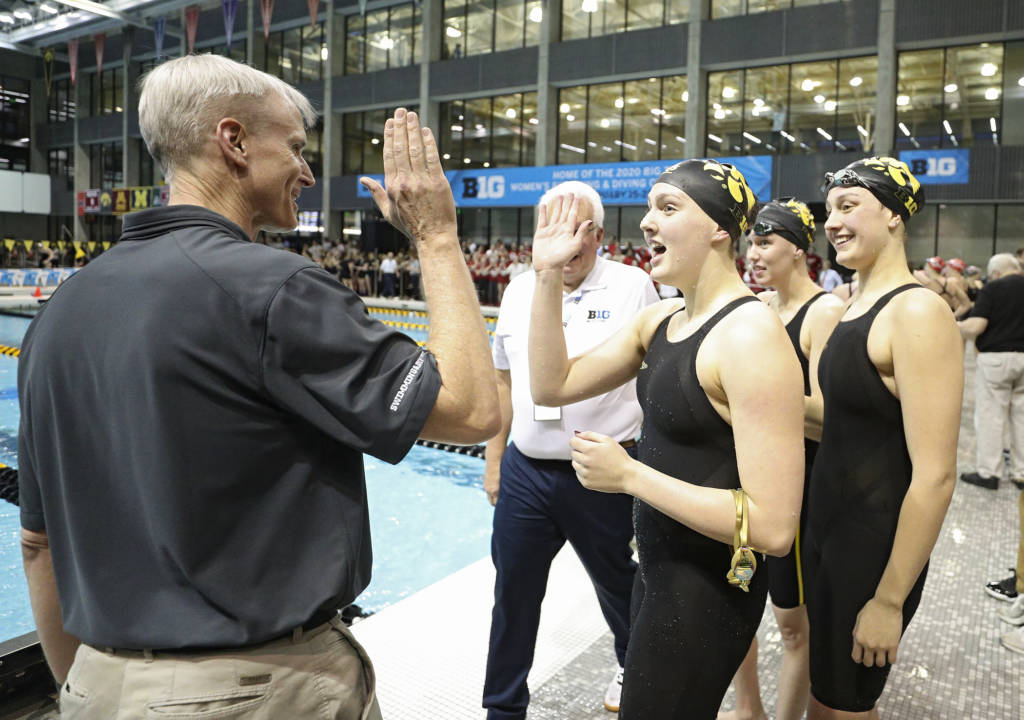 Iowa had a record-breaking season, setting 12 program records (seven women’s, five men’s) and 11 Hawkeyes earned Big Ten Conference weekly recognition.  Iowa had success at the Big Ten Championships.  Burvill swam to a bronze medal in the 200 free at the CRWC, helping Iowa to a 10th place finish with 430 points — the most for the program since the format changed to 24-place scoring in 2014.

During the 2018-19 season, the Hawkeyes had five student-athletes — two men and three women — qualify for the NCAA Championships.  The team swam to five school records and posted 64 top-10 times in program history.

In 2017-18, the program recognized 100 years of Iowa swimming and diving throughout the season.  Hundreds of former Hawkeyes returned to campus to say farewell to the Field House Pool and celebrate the century mark.

The Hawkeye men went 5-1 in dual competition, including posting back-to-back victories over No. 21 Minnesota and at No. 23 Purdue.  The Iowa women went 6-3 and the program swam to 69 NCAA qualifying marks with 10 Hawkeyes being honored with weekly Big Ten weekly recognition during the course of the season. 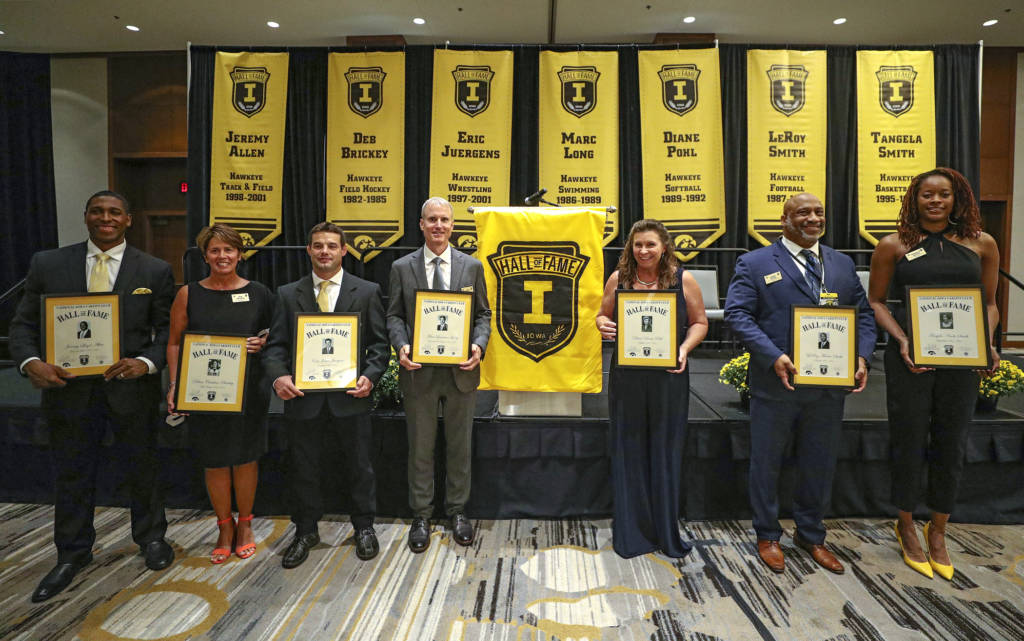 In 2016-17, the Iowa women’s team recorded its highest finish in 12 years, placing 26th at the NCAA Championships.  The Hawkeyes had a pair of first-team All-Americans in breast stroker Emma Sougstad and platform diver Calli Head.  Sougstad’s performance at the NCAA meet was one of the best swims in Big Ten Conference history.

The 2015-16 season saw the Hawkeyes finish in the top-40 nationally at the NCAA Championships. The women’s team had three NCAA qualifiers and finished 38th, courtesy of an honorable-mention All-America performance from junior Emma Sougstad. Sougstad won the “B” heat, finishing ninth overall in the 100 breaststroke. Sougstad was honored as the CollegeSwimming.com National Swimmer of the Week in December.

The UI men had five NCAA qualifiers and tallied a 40th-place finish nationally, highlighted by two honorable-mention All-America performances from senior Roman Trussov. The breaststroker earned All-America distinctions in both the 100-and-200-yard breaststroke events. Trussov was also a second-team All-Big Ten honoree after finishing as the 100-breast runner-up at the 2016 Big Ten Championships.

Over the course of the season, the Hawkeyes swam to 12 school records and had 28 UI student-athletes posted NCAA qualifying standards. Academically, Iowa had 35 Academic All-Big Ten honorees and the program received both the spring and fall CSCAA Scholar All-America Award distinction.

Iowa enjoyed success across the board during the 2014-15 season — a year where the UI was in the national spotlight, hosting the 2015 NCAA Men’s Swimming and Diving Championships at the Campus Recreation and Wellness Center Natatorium. It was the first championship in Iowa City since 1927.

The Hawkeyes swam to 19 school records and had 31 student-athletes post NCAA qualifying standards. The Iowa men had five NCAA qualifiers en route to a 35th place finish (eight points) at the NCAA Championships, while the women had four NCAA qualifiers — the most since 1993 — to place 38th nationally with 10 points.

Both teams tallied eighth-place finishes at the 2015 Big Ten Championships. The Hawkeye women finished with 223 points, while the men’s squad had 230.5 points in a championship event held in Iowa City.

The Hawkeyes garnered national rankings during the course of the season with the men’s squad climbing as high as No. 19 in the CSCAA rankings and SwimSwam Power rankings. The Hawkeye women were 21st in the CSCAA poll Jan. 21.

Academically, Iowa had 27 student-athletes earn Academic All-Big Ten honors with the 12 men’s honorees tying the school record. The Hawkeye women earned the CSCAA Fall and Spring Scholar All-America honors for the seventh straight year and the program has received at least one team accolade dating back to 2005.

In 2013-14, Long guided the women’s team to a 9-5 dual record with the nine victories being the second-highest total for the program in his tenure. The Hawkeyes went 4-3 in Big Ten duals, which led to a No. 20 ranking in the collegeswimming.com poll on Dec. 29. The team posted school records in four individual and four relays throughout the course of the season.

The UI men’s squad was ranked as high as No. 21 in the CSCAA poll for three weeks and three school records went down in 2013-14. Long coached senior Dustin Rhoads to the NCAA Championships in the 100 and 200-yard backstroke events, marking the fourth-straight year the Hawkeyes have been represented at the championship.

Both the men’s and women’s squads posted eighth place finishes at the 2014 Big Ten Championships. The UI women finished with 199 points, while the men tallied 188 points. At season’s end, 31 Hawkeyes were named Academic All-Big Ten honorees — the 19 women’s selections were a school record, while the men tied a record with 12 receiving the accolade.

Twenty-one school records went down during the course of the season and 20 Iowa student-athletes posted NCAA automatic or provisional times. The men’s team finished seventh at the Big Ten Championships with 245 points, while the women’s squad was 10th with 113 points.

The men’s team finished the 2013 season ranked 20th in the Collegeswimming.com/CSCAA Coaches Poll after posting a 7-3 dual record; the women’s squad received votes in the rankings during the season and finished the year with an 8-2 record. Academically, 25 Hawkeyes earned Academic All-Big Ten recognition.

The women’s team finished ninth at the 2012 Big Ten Championships with 201 points. Freshman Becky Stoughton became the first Hawkeye to be selected as the Big Ten Freshman of the Year after finishing in the top six in three individual events.

The Iowa men’s team posted a 26th place finish at the NCAA Championships, its best showing since 1995, and three Hawkeye relays earned honorable mention All-America honors. Stoughton became the first UI female swimmer to advance to the NCAA Championships since 2005 and the first freshman since 2002. She earned honorable mention All-America honors after placing ninth in the 1,650 free.

The men’s team finished the season with a 7-2 dual meet record, running its four-year mark to an impressive 31-5. The team climbed to a program-best 10th in the CSCAA dual meet rankings and finished the season ranked 14th overall. The Hawkeye women posted a 10-6 record, the most dual victories since the 1985-86 season.

In 2010-11, the Hawkeye men set schools records in three individual events and all five relays, while the women’s squad set a program record in one individual event and one relay. The men recorded a dual meet record of 7-1 overall and 3-1 in the Big Ten to finish the year ranked 24th in the final TYR/CSCAA rankings.

The Hawkeye men sent Paul Gordon, Jordan Huff, Duncan Partridge, and Ryan Phelan to the NCAA Championships in the 200 free relay and the quartet earned All-America honors in the 400-free relay. The team posted NCAA “B” cuts in 11 individual events and five relays. The women’s team was named to the CSCAA All-Academic team for the sixth-straight year, and 20 Hawkeyes earned Academic All-Big Ten honors.

In 2009-10, the Hawkeye men set school records in two individual events and three relays, while the women’s squad set a program record in one individual event and established a new pool record. The Iowa men recorded their best dual record in program history with a 10-1 overall record and finished sixth at the Big Ten Championships, the highest finish in 14 years. The women were named to the CSCAA All-Academic team for the fifth-straight year, and 28 Hawkeyes earned Academic All-Big Ten honors.

In 2008-09, the Hawkeye women set school records in four individual events and three relays, while the men’s squad set school bests in two individual events. The Hawkeyes posted NCAA “B” cuts in seven individual events and five relays. The Iowa men posted their best dual record since 1995 with a 7-1 mark, and went undefeated (4-0) at its own Field House pool. The women were named to the CSCAA All-Academic team for the fourth straight year, and 25 Hawkeyes earned Academic All-Big Ten honors.

In 2006-07, two school records were broken and nine student-athletes posted NCAA “B” cuts. Dragos Agache led the Hawkeyes by competing at the NCAA Championships in both the 100 and 200 breast — two events in which he set school records.

In his first season with the combined program (2005-06), four student-athletes qualified for the NCAA Championships and four school records were broken. Five-time All-American and U.S. Olympic diver Nancilea Underwood completed her Hawkeye career by leading the women’s team to a 27th-place finish at the NCAA meet. Agache led the men’s squad, competing in the 100 and 200-yard breaststroke at the NCAA meet, setting the school 100-yard breaststroke record and posting Iowa’s highest individual finishes at the Big Ten Championships.

In 2004-05, the women’s team recorded their second-highest finish at the NCAA Championships (23rd) in school history. The Hawkeyes were led by Underwood and four-year NCAA qualifier and All-American Jennifer Skolaski. The Hawkeyes set five school and two Field House pool records, posting a 5-4 overall dual mark.

Before focusing solely on his head-coaching duties, Long served as the UI’s aquatics director for his first six years as head coach. In his dual role, Long was a part of the core committee involved in designing the Campus Recreation and Wellness Center — one of the best facilities in the country.

As an assistant coach, Long helped Iowa to its highest placing and point total in school history (20th, 41 points) at the 2003 NCAA Championships. The Hawkeyes also posted an 8-4 overall season record, which was the first winning season for the program since 1999-2000.

The Cedar Falls, Iowa, native began his collegiate swimming career at the University of Northern Iowa (1986), winning the conference title and setting the 100 butterfly school record before joining the UI men’s squad for his sophomore season.

As a Hawkeye swimmer (1987-89), Long was a multiple NCAA finalist, six-time All-American and three-time Big Ten champion, winning two conference titles in the 100 fly and one as part of the 400 free relay. He was voted a team captain in 1989 and helped lead the Hawkeyes to a Big Ten runner-up finish, and their highest team placing (eighth) in modern day history at the NCAA Championships. He swam on Iowa’s Big Ten and NCAA record setting 200 freestyle relay in 1989.

Long was also a member of the 1987 U.S. National Champion 400-meter freestyle relay team from San Jose (Calif.) Aquatics, and participated in the 1988 U.S. Olympic Trials. He was inducted into the National Iowa Varsity Club Athletics Hall of Fame in 2019.