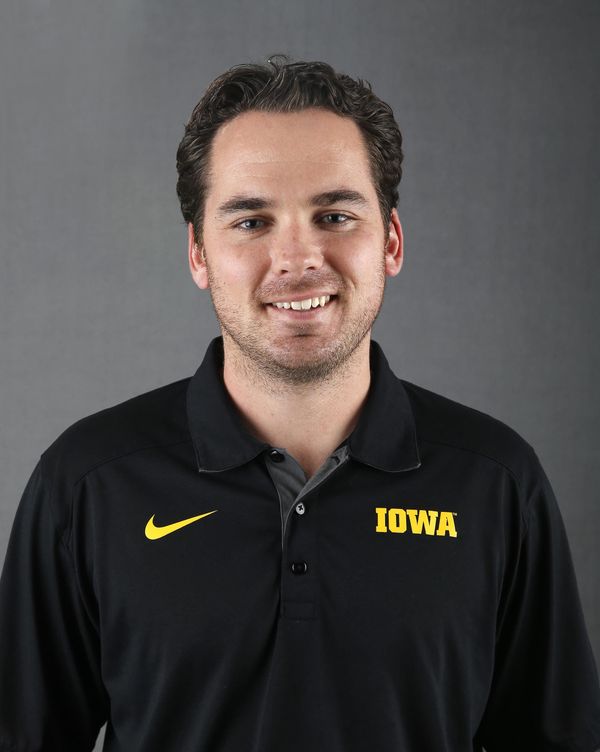 Over the course of Wilson’s first five years as head coach, Iowa won 74 matches, a total that ties for fifth most over a five-year span in program history.

In 2021, Wilson mentored the doubles team of Oliver Okonkwo/Will Davies to the NCAA Championships. Okonkwo/Davies ascended as high as No. 2 in the national rankings, the highest an Iowa doubles team has been ranked in program history. Davies/Okonkwo are the seventh doubles duo in program history, and first in over three decades, to qualify for the NCAA Championships.

Under Wilson’s guidance, Kareem Allaf earned first-team All-Big Ten accolades for the second straight season and became Iowa’s all-time leader in wins, and Will Davies tied the program’s record for most doubles victories.

Off the court, the Hawkeyes excelled in the classroom in 2021, with six student-athletes earning Academic All-Big Ten recognition, equaling the most in program history.

Wilson coached Iowa to a 12-2 start in 2020 and a national ranking as high as No. 20. In fall individual competition, five student-athletes qualified for the ITA Fall National Championships, including two Iowa doubles teams qualifying for the first time in two decades. In the spring, Wilson and the Hawkeyes knocked off three ranked opponents (No. 16 Cornell, No. 35 Denver, and No 50 VCU) and were on pace to qualify for the program’s first NCAA Tournament before the season was canceled by the Big Ten Conference and NCAA on March 12, due to concerns of coronavirus (COVID-19).

Wilson had Iowa on the cusp on making the 2019 NCAA Tournament, recording 18 overall wins and six Big Ten victories. The 18 wins tie for the third highest single-season total in program history and are the most since 1991, while the fifth place finish in the Big Ten standings is its best finish in 26 seasons. Iowa established a new school record in home wins, registering 14 victories at the Hawkeye Tennis & Recreation Complex. The Hawkeyes were nationally ranked in the top-50 the last six weeks of the season. Iowa competed against 12 NCAA Tournament qualifiers, beating seven of them, including three ranked opponents (No. 18 Minnesota, No. 19 Michigan, and No. 30 Penn State).

In his first season as head coach, Wilson guided the Hawkeyes to both team and individual success. Wilson guided and molded a lineup that comprised mostly of four freshmen to a ranking as high as 45th nationally — its highest ranking ever since the ITA expanded their rankings. Iowa amassed more wins than the previous 23 seasons, including two wins over ranked opponents and five against Big Ten competition.

Individually, Hagan was recognized on the first All-Big Ten team. The senior was ranked as high as 79th nationally in singles and 31st in doubles with partner Dominic Patrick. Hagan and Patrick made history, becoming only the second Iowa first-flight Big Ten Doubles champions, and first since 1958, in program history. Hagan also became the third Hawkeye, and first since 1999, to reach the ITA Regionals Semifinals in singles.

Undaunted by having a lineup stacked with freshmen, Wilson was able to get the most of his young and talented roster. Three freshmen shared the team lead in singles victories in fall and spring competition. Jake Jacoby, Lefteris Theodorou, and Silverstein all recorded 20 singles wins. Silverstein also had success at the Big Ten Indoor Singles Championships, advancing to the semifinals.

In 2015-16, Wilson and the Hawkeyes climbed to No. 33 in the ITA rankings on March 1, 2016, its highest team ranking in program history. Iowa won 12 matches, with five of the 12 wins coming over ranked opponents, including No. 40 Denver and 58th-ranked Indiana at the Big Ten Tournament. Iowa’s quality of wins and strength of schedule garnered the Hawkeyes an invitation to the 2017 ITA Kickoff Event for only the second time in program history (2010).

In his third season as head coach in 2016-17, Wilson guided  Allaf to 23 singles wins and Silverstein to 19 doubles victories, which ties for 11th best, respectively, in a single-season at Iowa. Silverstein continued his steady growth and improvement, earning second team all-conference accolades, and ascending to 77th nationally in doubles and 103rd in singles during the season. As a team, the Hawkeyes won 14 matches, one of which came against Texas Tech — on its home court — in the ITA Kickoff Event.

In 2017-18, Wilson coached the Hawkeyes to 16 wins, a total that ties as the fifth most in a single season in program history. Iowa also recorded its highest ranked win in program history, winning 4-3 at No 14 Dartmouth on Feb. 24, 2018. Wilson and the Hawkeyes also registered the program’s first ever victory over the University of Arizona in 14 matches. Wilson coached two doubles teams to success throughout the 2017-18 season. Davies and Piotr Smietana were doubles finalists at the Big Ten Indoor Championships, and were ranked as high as No. 40 in the country. Jonas Larsen and Allaf won 18 matches during dual meet season and were ranked as high as No. 54. Throughout the 2017-18 season, Allaf and Davies each won 22 doubles matches, which tie for fifth most in a single-season in Iowa annals.

Wilson began his Iowa coaching career in the fall of 2013 as an assistant coach. In his first season with the Hawkeyes Wilson made an immediate impact, helping the program secure a pair of five-star recruits in Silverstein and Jacoby. In 2017, his recruiting class was ranked 16th nationally by the website tennisrecruiting.net.

Wilson was a standout at national power Ohio State from 2002-06. He was a two-time NCAA All-American and three-time ITA national doubles champion. Wilson broke the Buckeyes’ overall career wins record, career doubles wins record and single season doubles wins record in 2006. He was part of the only doubles tandem in the history of college tennis to ever win back-to-back ITA National Indoor titles (2005 and 2006) and was part of the No. 1 ranked doubles team in the nation those seasons.

Following his collegiate playing career in Columbus, Wilson played two years on the USTA Pro Circuit in 2007 and 2008, winning three ITF Pro Circuit titles. Wilson also coached at the professional level as the personal coach of Sharon Fichman, who was ranked among the top 100 women in the world on the WTA tour.

Wilson helped guide San Diego to an 18-10 overall mark and a 6-2 conference mark in 2013, as the team made its third-straight appearance in the NCAA Tournament. Wilson coached four Toreros to all-conference honors, as San Diego climbed as high as No. 26 in the ITA rankings.

Prior to joining the staff at San Diego, Wilson served as the men’s and women’s assistant coach at Kenyon College from 2010-12. He helped guide the men’s team to their first NCAA Division III Tournament finals appearance in program history in 2012, while also helping lead the team to a No. 2 final ITA national ranking — the highest in program history. Wilson was named the 2012 ITA National Assistant Coach of the Year and the ITA Central Region Assistant Coach of the Year. He coached three singles All-Americans at Kenyon, one doubles All-American team and an NCAA Tournament singles semifinalist.