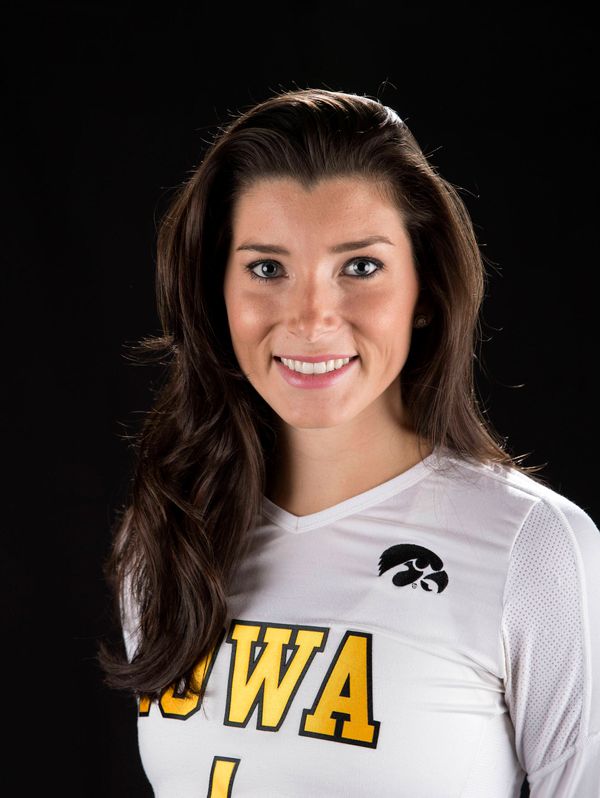 2014 as a Senior… Started every match (31) of the season and played in every set (106) as a middle blocker… one of three to start every match of the season, and one of four to appear in every match (31) and set (106)… broke the eight-year-old Iowa career attack percentage of .276 held by Jen Barcus (2006), finishing her career with a .278 attack percentage (627 kills, 193 errors and 1560 total attacks)… broke the five-year-old Iowa single match attack percentage of .818 held by Becky Walters (2009) when she compiled an .882 attack percentage and 15 kills at South Dakota State on Sept. 13… closed her career with 274 total blocks (37 BS and 237 BA), which ties her for 11th all-time at Iowa… ended the season ranked eighth in the Big Ten in hitting percentage (.348) and ninth in service aces per set (0.25)… led the Hawkeyes in service aces (27) and service aces per set (0.25)… matched her career-high with seven total blocks against Tulane on Aug. 30… has posted a .400 or above hitting percentage in 14-of-31 matches this season… named to the Residence Inn Challenge all-tournament team after helping Iowa to a 2-1 record at Arizona State… 2014 SDSU Challenge all-tournament team pick after helping Iowa to a 4-0 record… posted a .460 hitting percentage with 37 kills and six service aces in the final tournament of the season… set a new school record with a career-high .882 attack percentage at South Dakota State on Sept. 13… served up three aces at Iowa State to lead the team on Sept. 20… posted a career-high nine blocks against Illinois on Oct. 15… Iowa’s most efficient hitter with a .444 attack percentage at Wisconsin on Oct. 22 and at Minnesota on Oct. 25… hit .500 and .529 in Iowa’s wins over Maryland on Oct. 31 and Rutgers on Nov. 1, respectively… served up three aces in consecutive matches at Maryland and Rutgers… closed the season with a .421 attack percentage in the team’s 3-2 win over Maryland and a .294 attack percentage against Michigan State in the season finale to break the program’s career attack percentage record… Academic All-Big Ten… team captain… letterwinner.

High School… Three-year varsity letterwinner… served as team captain as a senior… honorable mention AVCA Under Armour All-American selection as a senior… named All-State as a junior and senior… finished fourth in voting for ‘Miss Volleyball’ in the state of Michigan… guided her team to back-to-back Michigan Class A State Championships as a junior and senior… helped her team to the Catholic League Championship in each of her three varsity seasons… nominated for the 2010 Gatorade Player of the Year award… named honorable mention ‘Senior Aces’ selection for the class of 2011 by PrepVolleyball… posted 649 kills and 98 service aces as a senior… guided her squad to a 69-6-1 overall record and a No. 2 ranking in the state of Michigan as a senior… also competed in lacrosse and basketball in high school.