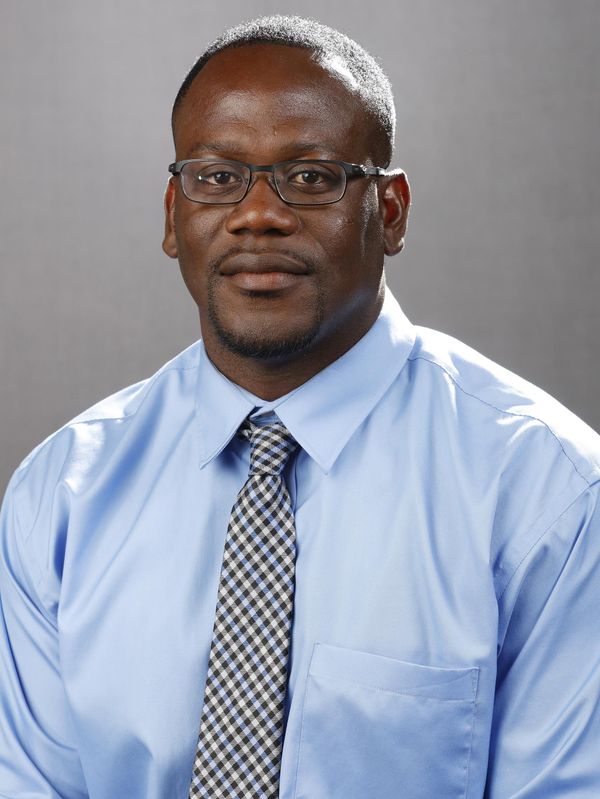 Clive Roberts is in his 13th season on the University of Iowa track and field staff, and his seventh as associate head coach. Since 2009, he has overseen women’s sprints and men’s and women’s horizontal jumps.

Since arriving on campus, Roberts has led his student-athletes to 28 Big Ten titles, 48 All-America honors, and 27 school records.

With the coaching of Roberts, former Hawkeye Brittany Brown took silver in the 200 meters at the World Championships in Doha, Qatar on Oct. 2, 2019. Brown is the first Hawkeye to medal at a world championship since 2016. Brown ran a personal best of 22.22.

In 2017, Roberts guided Brittany Brown to first-team All-America selections in both the indoor and outdoor 200 meters as well as Big Ten titles during both seasons. Brown capped off her season at the NCAA Outdoor championships being named a first-team All-American in the 200 meters; Iowa’s first in program history. During the indoor season, Jahisha Thomas finished third at the Big Ten Championships in the long jump and seventh in the triple jump on her way to earning second-team All-America honors at the NCAA Championships. During the outdoor season, Brown and Thomas earned silver medals at the Big Ten championships in the 100 meters and long jump, respectively. In addition, Roberts led the duo to USA Outdoor Championship and UK Championship berths.

In 2016, freshman Briana Guillory won Big Ten Freshman of the Year honors following a pair of Big Ten championships in the 200 meters and 1,600-meter relay. Guillory’s championships were two of four conference titles won by Roberts’ group in 2016. Lake Kwaza won the indoor 60 meters, and Elexis Guster won the Big Ten indoor 400 meters. Kwaza set the school record in the 60 meters, Guillory set the school record in the 100 meters, and both the 400- and 1,600-meter relays set school records. The 1,600-meter gold medal performance set the Big Ten record. Both relays also advanced to the NCAA Outdoor Championships for the first time in school history. Roberts’ student-athletes earned seven All-America honors in 2016, two indoor and seven outdoor. He also coached the women’s high jump.

In 2015, Babatunde Amosu swept the Big Ten Championships by winning conference titles in the indoor and outdoor triple jump. Amosu’s performance marked the sixth and seventh times since 2011 Iowa crowned a league champion in the triple jump. Elexis Guster also defended her400-meters conference title at the Big Ten Outdoor Championships. The Hawkeye women appointed the new fastest women in program history in 2015. Lake Kwaza broke the school record in the 100 meters, and Brittany Brown set a new standard in the 200 meters.

In 2013, he guided freshman Klyvens Delaunay to a first team All-America finish at the NCAA Championships. Delaunay hit a season-best 52-2 1/2 (15.91) in the finals to place eighth in the triple jump. Roberts also coach Josh Larney to All-America honors in 2013. Larney earned honorable mention in the 100 meters and anchored the 400-meter relay to a sixth place finish. He also coached the women’s high jump.

A native of Toronto, Canada, Roberts served as an assistant coach for the Bowling Green State University women’s team during the 2007 and 2008 seasons. During his first indoor season with the Falcons, he guided sprinter Jessica White and hurdler Nicole Standback to successful seasons. White set the school record in the 60 meters (7.53) and placed third in the 100 meters at the MAC Championships. Her season-best time of 11.58 ranked second in school history and qualified her for the NCAA Regional, making her the Falcons’ first sprinter to qualify since 2004. Standback placed third in the 60-meter hurdles and 100-meter hurdles at the conference meet, posting the third fastest 100-meter hurdles time (14.03) in school history.

Before joining the Bowling Green staff, Roberts served as a graduate assistant at his alma mater, Central Michigan University. During his stint with the Chippewas, Roberts coached 13 MAC Champions, two indoor all-Americans, and one USA Track Championship qualifier. The men’s squad won the 2005 MAC indoor and outdoor team titles, and Roberts guided conference champions Pierre Vinson and Clarence Glenn to all-America honors at the NCAA indoor meet. Roberts coached the top placers in the 60, 200 and 400 meters, 60-meter hurdles, and 1,600-meter relay at the 2005 conference indoor meet, and the 100, 200 and 400 meters, and 110 and 400-meter hurdles champions at the conference outdoor meet. Vinson received the Most Valuable Participant award at both the indoor and outdoor championships. Vinson’s personal best under Roberts was 10.29 in the 100 meters and Glenn’s personal best under Roberts was 13.60 in the 110-meter hurdles.

Roberts was a hurdler Central Michigan, qualifying for nationals and placing second in the 60-meter hurdles at the MAC Championships. He was a Canadian Junior Champion in the 110-meter hurdles during his high school career.

Roberts currently is a Level II USATF certified coach in sprints, hurdles, jumps and throws. He is also a certified USATF instructor.

Roberts’ Coaching Philosophy
I coach because I love the sports of track and field and because I feel it is what God created me to do. I feel a great responsibility to meet the needs of my student athletes both athletically and personally. There is no greater responsibility than to be given the opportunity to make a positive difference in someone’s life. I want to win and have successful teams, but I will never make the success of the team more important than the welfare of the individuals I coach. It is my job to assist the head coach in leading the team in the right direction through emphasis on academics and ethical behavior, and to guide them athletically using training methods that are sound and have proven success. It is also my job to make sure that I am always taking the individual into account and what will work best for them to reach their full potential in all areas of life. A successful team is built around successful people. Without quality individuals as a foundation the team cannot be successful.