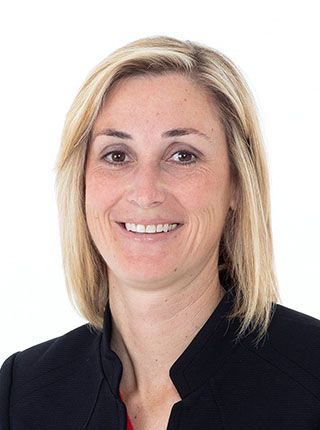 Beth Goetz was named Deputy Director of Athletics and Chief Operating Officer (COO) at the University of Iowa on Sept. 7, 2022.

Goetz joined the Iowa athletics staff from Ball State University, where she had served as Director of Athletics since May of 2018. At Ball State, she directly supervised 19 Division I Intercollegiate sports teams, all head coaches, and the senior athletics department professional staff. Goetz previously served as Minnesota’s Deputy Athletics Director from 2013-15 and interim Athletics Director during the 2015-16 season.

Ball State won 10 Mid-American Conference championships during the time Goetz served as athletics director, including seven during the 2021-22 athletics campaign, the most since 1999-2000. Goetz also guided Ball State to strong marks in the Reese and Jacoby Trophy standings, which honors the top men’s and women’s athletics programs in the MAC, respectively. The Cardinals placed third in the Reese Trophy standings in 2021-22, their best finish since taking second in 2013.

In addition to her previous role as an administrator, Goetz has been selected for national leadership duties. Goetz was named vice chair of the NCAA Division I Women’s Basketball Committee prior to 2021-22 and is serving as chair in 2022-23. She was named by Women Leaders in College Sports as the 2022 NCAA Division I FBS Nike Executive of the Year.

Goetz was recognized by the Indianapolis Business Journal (IBJ) as one of the publication’s 2021 Women of Influence, as Ball State student-athletes reached heights never before achieved in the classroom. Ball State Athletics earned its highest-ever Academic Progress Rate (APR) with a score of 992 in 2020-21, besting the previous mark of 991 accomplished in 2018-19.

In addition, Ball State produced back-to-back years with a Graduation Success Rate (GSR) of 90 percent, which was a record high for the Cardinals and 23 points higher than the numbers released in 2013-14. Ball State is one of only four schools in the MAC to record consecutive years of 90 percent GSR over the last two reports.

Among the first projects Goetz tackled at Ball State was the creation of a five-year strategic plan titled, Onward, which was created prior to 2019. The plan aimed to foster an environment that breeds academic success, impactful student-athlete experience, competitive excellence, community engagement, a sense of spirit & tradition, a Cardinal Culture and financial responsibility, while embracing Ball State’s enduring values of Beneficence.

Goetz’ fundraising acumen was on full display while at Ball State, highlighted by numerous capital projects, including the completion of the university’s $15 million Scheumann Family Indoor Practice Facility, which was financed entirely with private donations.

Prior to arriving at Ball State, Goetz was the chief operating officer/senior woman administrator at the University of Connecticut from 2016-18. She was the associate athletics director at Butler University from 2008-13 following a 13-year stint at the University of Missouri-St. Louis, where she was an assistant women’s soccer coach (1996), head women’s soccer coach (1997-2008) and assistant athletics director/senior woman administrator (2001-08). Goetz was inducted into the UMSL Sports Hall of Fame in 2014.

During her college career Goetz was an accomplished Division I student-athlete, playing soccer at Clemson University. She earned All-America recognition at Brevard College (N.C.), where she was inducted into the college’s Hall of Fame in 2017. Goetz earned an associate of arts degree from Brevard in 1994 and a bachelor of arts degree from Clemson in 1996. She earned her master’s degree from the University of Missouri-St. Louis in 2000.