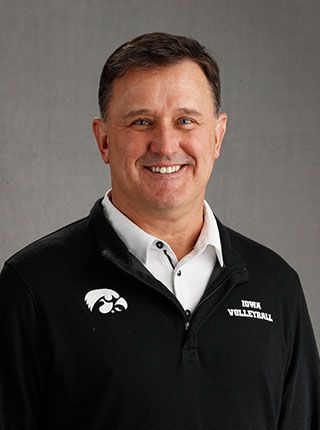 Jim Barnes was selected as the 11th head coach in program history on December 28, 2021.

In his 24 years as a head coach, Barnes has amassed a career record of 455-345 (.569), and nine 20-plus win seasons. He has put together six top-20 recruiting classes and made four appearances in postseason tournaments, including a program first NCAA Sweet 16 run.

Barnes arrives in Iowa City after spending six seasons (2016-21) at the helm of the Tulane volleyball program. While at Tulane, Barnes led the program to back-to-back National Invitational Volleyball Championship appearances including making it to the finals in 2018, during a 29-win season.

In his first season at Tulane, the Green Wave won 18 matches and was the most improved in the NCAA starting the season with an RPI of 247 and finishing at 90.

Barnes understands the importance of academic achievement and under his leadership Tulane volleyball earned a cumulative GPA of 3.49 for the 2019-20 academic year and a 3.362 GPA in 2017. Barnes had 14 members of the team named to the AAC All-Academic Team.

Before Tulane, Barnes spent 11 seasons as the head coach at Baylor (2004-15), where he became the program’s all-time win leader with 181 victories. Barnes’ tenure in Waco, Texas, included two 20-win seasons, and two NCAA Tournament appearances, including an appearance in the Sweet 16 in 2009.

Barnes produced the first five All-Americans and recruited the first NCAA Player of the Year in Baylor history.

Prior to coaching at Baylor, Barnes spent two seasons at Wyoming. While in Laramie, Wyoming, Barnes turned the program around as the Cowgirls went 20-11 in his first year, posting Wyoming’s first 20-win campaign in 11 years.

Barnes got his coaching start at his alma mater of McNeese State, where he spent six years as an assistant coach.

The Lake Charles, Louisiana, native earned his bachelor’s and master’s degrees from McNeese State in 1994 and 1996, respectively.

Barnes is married to the former Tracy Pittman, and they have two daughters, Brooke Aidan and Jenna Grace.