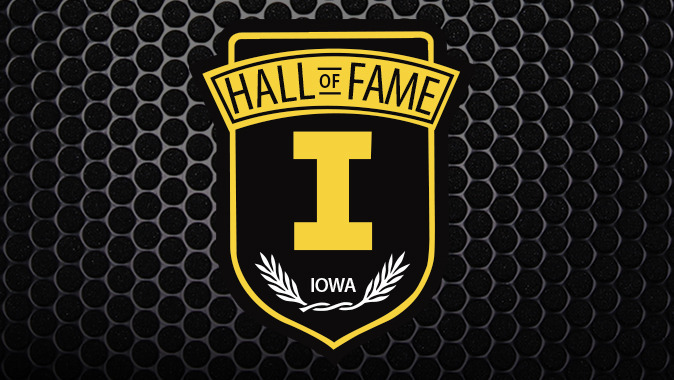 These six inductees were selected by a vote of all dues-paying members of the National Iowa Varsity Club. All former Hawkeye athletes who have won at least one major letter are eligible for the UI Athletics Hall of Fame. Athletes must have completed their eligibility at least 10 years and coaches/administrators at least five years prior to their selection.

The Hall of Fame Induction Ceremony banquet/dinner will be held on Friday, August 29, 2014 at 6:30 p.m. (CT) inside the Grand Coral Ballroom at the Coralville Marriott Hotel and Convention Center. A reception will precede the dinner beginning at 5:30 p.m. (CT).

The induction banquet/dinner is open to the public. Tickets may be purchased for $35 by sending your name and check to the National Iowa Varsity Club, ATTN: HoF Banquet, University of Iowa, N409 CHA, Iowa City, IA, 52242 by Friday, August 22nd. For more information please call the Varsity Club office at (319) 335-9438.

Nate Kaeding — Kaeding was a four-year letterwinner for the Iowa football team from 2000-03. He was a two-time first-team All-American (2002-03), and won the 2002 Lou Groza Award as the nation’s best placekicker. An All-Big Ten first-team selection in 2002 and 2003, Kaeding holds school records for single-season and career scoring, consecutive and career field goals made, and PAT’s made in a season, career, and consecutively. Following his career as a Hawkeye, Nate played 10 years in the NFL with the San Diego Chargers and Miami Dolphins.

Bruce Kinseth — Bruce was a four-year letterwinner in wrestling from 1976-79. As a senior he won the 1979 NCAA and Big Ten championships at 150 lbs., becoming the only athlete in NCAA history to pin his way through both the Big Ten and NCAA tournaments. He was named Outstanding Wrestler of the 1979 NCAA Championships and set an Iowa record for pins in a season (23), being awarded the Gorriaran Trophy for the most pins in the least amount of time. He was also the 1978 NCAA runner-up at 150 lbs.

Jeanne Kruckeberg — Kruckeberg earned four varsity letters in cross country (1987-90) and three in track (1988-90). She was a four-time NCAA All-American, two-time Big Ten indoor champion (1987 880 yards, 1989 3,200-meter relay), and a runner-up at the 1989 NCAA Indoor Championships (800 meters) and 1989 Big Ten Cross Country Championships. She was named 1989 Drake Relays Female Athlete of the Meet after winning the 1,500 meters and distance medley relays. She set six school records during her career, and still owns the indoor and outdoor 3,200-meter relay and outdoor distance medley records.