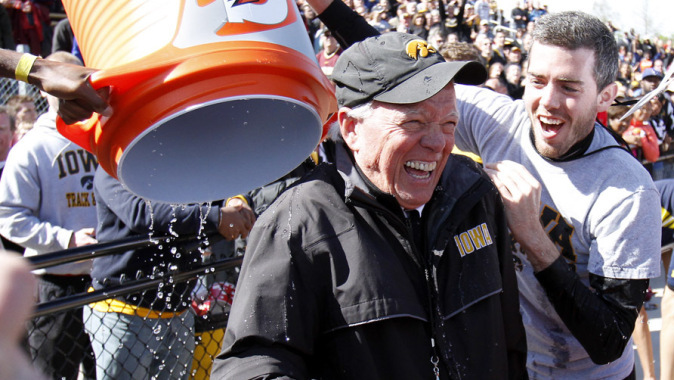 IOWA CITY, Iowa — After 50 years of running in circles, Larry Wieczorek has decided to “stop and see what else is going on.”

The University of Iowa’s director of track and field and cross country announced his retirement Tuesday, half of a century from the day he first arrived on campus as a freshman in 1964.

“At the beginning of this year, my wife, Jackie, and I thought the time was right,” said Wieczorek. “Thirty years on the Iowa staff, 42 years in coaching, and turning 68 when the cross country season starts. Those numbers added up to tell me maybe this was the time.”

Wieczorek was a six-time Big Ten champion at Iowa from 1966-68. He graduated in 1969 and returned home to coach in Chicago until 1984 when Ted Wheeler coaxed him into returning to his alma mater.

Three years later Wieczorek took over the men’s cross country program, and in 1997 he was promoted to head men’s track and field coach. Since then the Hawkeyes have crowned 79 Big Ten Champions, 77 All-Americans, and won the school’s first Big Ten title in 44 years.

Today, 30 years after Wieczorek coached in his first NCAA Championships, 11 Hawkeyes are training to compete at the NCAA finals June 11-14 in Eugene, Oregon. The state of the program is in sharp focus, but rather than creating second thoughts, Wieczorek says it was added incentive to walk away.

“It made me feel good about this time in the sense that the ground work is laid for the Hawkeyes to soar higher than ever,” Wieczorek said. “The cupboard is full of good athletes on the men’s and women’s side. A great coaching staff remains behind to carry on, and facilities, we’re going to get them better, but they are the best they have ever been. I think the program is in great shape, and it will be fun to leave it in this kind of condition.”

Wieczorek has been named conference and regional coach of the year. He has been inducted into his high school, college, and Drake Relays Hall of Fame. But what means the most, he says, are the relationships he built with student-athletes — more than 300 have earned varsity letters for the Hawkeyes since Wieczorek was first named head coach.

“There is no question what I’ll miss the most, and that is being Coach Wiz,” he said. “I’ll have the relationships with the old athletes, but as soon as you’re not the coach, you’re not the coach. They are going to somebody else. I’ve had a team for 42 years, and I’m going to miss the process of going to practice and sharing the life of the student-athletes.

“One of my jokes with a message is you’ve got the rest of your life to get an education, you’ve got four years to make me famous. There is a message behind that. Athletics is a flower with a short bloom life. You can go to law school when you’re 40, but you can’t likely break the four-minute mile when you’re 40, or win a championship. I have been able to share a very important part of a person’s life.”

Awards, jokes, and championships aside, Wieczorek says he is leaving his post with zero regrets.

“I read in a sports psychology book that if you want to succeed you have to take some risks, and the biggest risk of all is to risk regret the rest of your life, that you didn’t go for it. I’m feeling very much at peace with no regrets right now.

“I’m very happy with where the program is today. I’m very happy they are not going to do a national search, and will instead fill the position from within. I think that is a big compliment to our program and the people in our program. To live the cliché, I feel like I’m leaving with the cupboard full and in good shape, so in that sense, no regrets.”

WHAT THEY’RE SAYING ABOUT COACH WIZ

BETH ALFORD-SULLIVAN
Penn State Director of Track and Field
“Larry was a great mentor within the Big Ten cross country and track and field coaches. I respected Larry’s knowledge, successes and passion for our sports. I always enjoyed seeing Larry at the Big Ten meets as he was a true sportsman and wonderful person. I will miss him!”

BRIAN BROWN
Drake Relays Director
“On behalf of myself and the Drake Relays, I’d like to say Larry Wieczorek is one of the most supportive men in track and field. He understands our sport and is going to be missed dearly. He has been a pillar in the track and field community with his willingness to serve the student-athletes and his loyalty to the Drake Relays. Certainly his time and effort developing young men and women has not gone unnoticed. Hopefully he will still be available when we need to grasp for some advice. My hat is off to Larry for his years of service at the University of Iowa and certainly to his student-athletes. He is a winner and someone we will miss dearly, so congratulations to Larry Wieczorek.”

DR. GEORGINA DODGE
UI Associate Vice President, Chief Diversity Officer
“When I first arrived at Iowa four years ago, coach Wieczorek was one of the first colleagues to approach me. He was rightfully proud of the track team’s diversity, but his intent was not to brag, rather to demonstrate a microcosm at the university where inclusion was practiced regularly through team spirit. He set the example for his team to follow, coaching them both on and off the field by demonstrating how to treat one another with respect. I was delighted to be named an honorary member of the team in 2011 because it is truly an honor to be affiliated with the team and with coach Wiz. He will certainly be missed, but his legacy and lessons will always remain.”

TIM DWIGHT
UI track & field All-American and Big Ten Champion
“Forty years is an incredible commitment by an individual and his family. During my tenure there, Wiz taught us a lot of things. He was always motivated and very team oriented in the way he gathered people together. He always made it fun. He always said, ‘Dwight, are you going to be an eater, or a competitor?’ And what he meant was, when you’re on the track trips, are you going to show up and actually run the race, or are you just going to make a travel roster and eat for free. He would say it every track trip and I would just laugh. He always made it fun.”

LONNIE GREENE
Purdue Head Coach
“Coach Wieczorek was one of the coaches I looked up to and any time you lose giants like that in the sport, you’ve lost a really important relic. He will be missed. His spirit will be missed. The heart in which he coached young people will be missed. He was truly a teacher and all of the athletes whose lives have been impacted by coach Wieczorek have a lot to be thankful for. The Big Ten will not be the same without him, but even the great ones have to take a moment to rest and reflect on their careers. I hope he enjoys his time of re-dating his wife, but doesn’t move too far away from the sport because we need the wisdom.”

RON HELMER
Indiana Head Coach
“Larry has become a good friend during my time in the Big Ten. During my recent illness and particularly during my late wife’s illness and passing, he regularly checked in to offer his support, encouragement, and condolences. I will never forget the outdoor Big Ten Championship his team won at home and the happy group of athletes that surrounded their happy coach at the conclusion of the meet. Enjoy your retirement.”

STEVE PLASENCIA
Minnesota Director of Men’s Track & Field
“Over the years Larry has been a friend, a competitor, a gentleman and a great statesman for our sport. He has always represented the University of Iowa with class, and I have nothing but the highest level of respect for him and all of his accomplishments over the years.”

ERIK SOWINSKI
UI track & field All-American and Big Ten Champion
“I’ve learned so much from coach Wiz both on and off the track. He has truly helped shape the person I am today. It is sad to see him go, but what he has done for the program and school will never be forgotten. Once a Hawkeye, always a Hawkeye.”