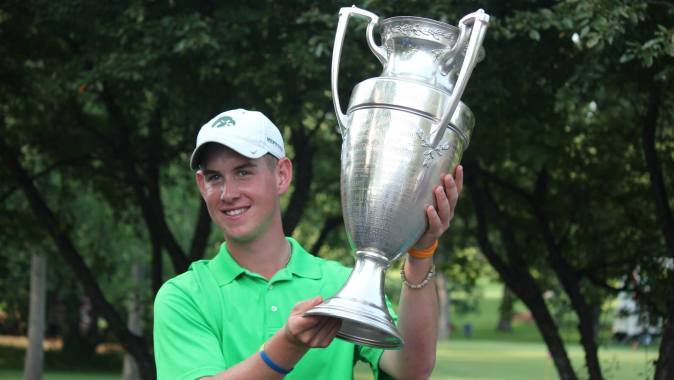 “It was great to come here this week to Cantigny and win,” said Knoll. “It is where I grew up, it is what I know and where I practice, and I felt really comfortable.”

Knoll, ranked first in the 2014 Illinois Player of the Year rankings, opened the week with a 75 on Tuesday, but put together five-straight birdies on Wednesday for a second round 67. The 2014 PING All-Region honoree tallied eight birdies on Thursday morning for a third-round 67 before carding a 71 in the final round.

“It was a hectic week (after the John Deere Classic and U.S. Amateur qualifying) and Tuesday I started pretty slow, but I was able to regroup and finish really well,” said Knoll.

Knoll registered his best finish of the season at the Boilermaker Invitational, where he tied for sixth (215, +4). In his final round of play at the event, Knoll carded a 66 (-6), which equaled the fourth-lowest round in program history, as Iowa rallied to earn the team title. He tied for 12th at the Big Ten Championships (300, +12), placed 15th at the Hawkeye-GRE Invitational (220, +4), and tied for 26th at the NCAA Columbia Regional (216, E).