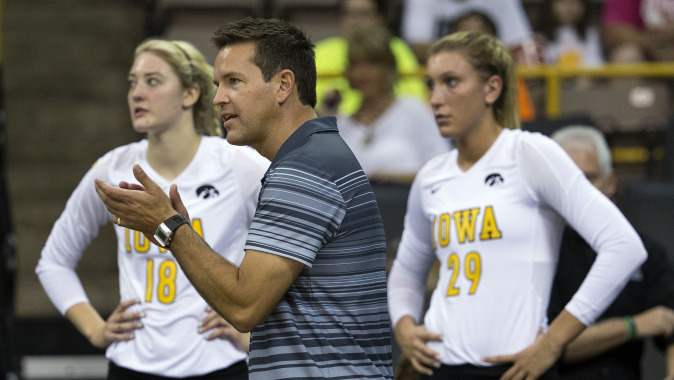 BROOKINGS, S.D. — The University of Iowa volleyball team overcame a slow start to post a three-set win over Eastern Illinois (4-3) in the opening round of the 2014 SDSU Challenge. The Hawkeyes move to 5-2 following the victory.

“You could see us working off our travel legs this morning,” head coach Bond Shymansky said. “We weren’t sharp and Eastern Illinois made us pay for our lack of focus. Once we started taking care of the ball better, we managed to right the ship.

“We want to come up with more dominant wins. By the end of the third set we were dominating the match. That’s what we should do and what we want to do at every point in the match no matter who we’re playing. We’re still up and down. We need to clean up what we’re doing and make sure we aren’t trying to force things.”

Eastern Illinois took advantage of a flat Hawkeye squad early in set one. The Panthers opened the contest with a 5-0 run and lead by as much as seven points before Iowa could rally back to secure its 25-23 opening set win. Jess Janota carried the load for the Hawkeye offense, recording seven of the team’s 16 kills.

The teams battled through 10 ties and five lead changes before the Hawkeyes defeated the Panthers in set two, 25-23. Errors plagued Iowa throughout the set as Eastern Illinois hit just .064. Janota and Alessandra Dietz spurred on the Hawkeye offense with four kills apiece, putting Janota into double figures for the fourth time this season.

The Panthers scored first in the third set, but the Hawkeyes used kills from Lauren Brobst and Alex Lovell and a Lovell and Gunderson block assist to pull ahead 5-3. Iowa never surrendered its lead, winning the finale 25-15 to record its third sweep of the season.

Iowa continues 2014 SDSU Challenge action tonight when it takes on North Dakota at 5 p.m. (CT). Links to live video and live stats are available at hawkeyesports.com.