Hawkeyes in 11th After Day 1 of Mary Fossum Invite 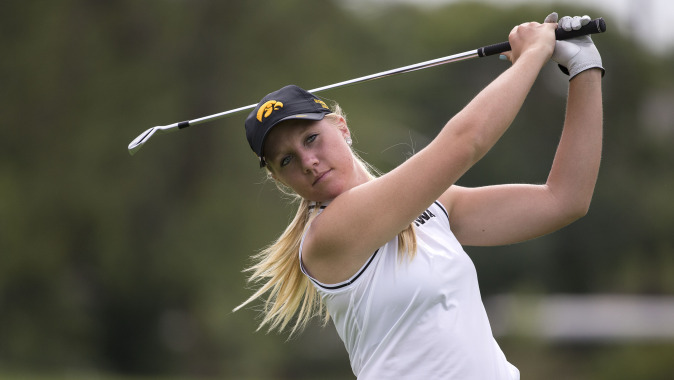 EAST LANSING, Mich.— The University of Iowa women’s golf team sits in 11th place in the field of 15 teams after 36 holes of play at the Mary Fossum Invitational, hosted by Michigan State University at Forest Akers West Golf Couse. The Hawkeyes finished with a two round total team score of 635 (+59).

“Today was a tough start,” said UI head coach Megan Menzel. “We need to refocus and come out strong tomorrow.”

Iowa tallied a first round total of 318 (+30), which put the team tied for eighth. The Hawkeyes registered a 317 (+29) in the second round to finish the day in 11th place two strokes behind Grand Valley.

“Jessie Sindlinger put together 27 pretty strong holes today,” said Menzel. “She is in a good position to make a move tomorrow. We need the entire team to work hard and find ways to save some strokes tomorrow.”

Sophomore Jessie Sindlinger led the way for the Hawkeyes after firing a first round total of 74 (+2). The Charles City, Iowa native, then shot a second round total of 79 (+7) giving her a total score through two rounds of 153 (+9). Her efforts have placed her in the top-20 tied for 16th place. Senior Jessie Jordan, competing as an individual, finished tied for 47th after a two round score of 161 (+17).

Freshmen Jessica Ip and Elisa Suarez, making their Hawkeye debuts, finished their days in the 57th spot. Suarez finished her first collegiate round of golf with a score of 81 (+9) and stayed consistent posting a second round 81 (+9) ending the day with a birdie on the 17th hole and a par on the 18th. Ip saw her first collegiate round of golf finish with a total score of 83 (+11) and a second round total of 79 (+7).

The final round of the Mary Fossum Invitational tees off Sunday at 8:30 a.m. (CT). The link for live score updates is available on the Iowa women’s golf schedule page.