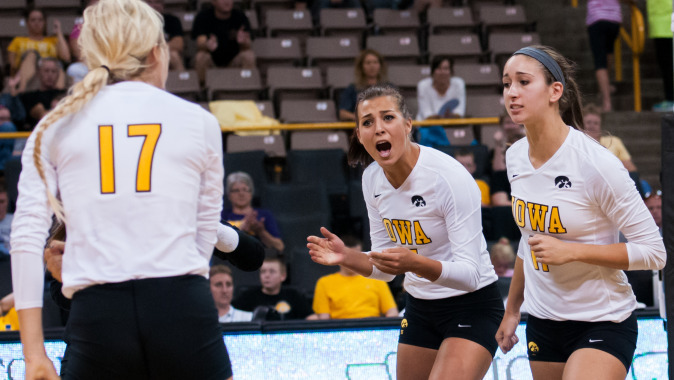 RIVALRY RUNDOWN
The Hawkeye volleyball team travels to Ames, Iowa, to take on Iowa State in the annual Iowa Corn Cy-Hawk Series match. The competition is set to begin at 4 p.m. (CT) in Hilton Coliseum. Entering the match, the Cyclones lead the 2014-15 series, 5-0.

RIGHT AT HOME
The state of Iowa is well represented on the Hawkeye and Cyclone rosters. Six-of-16 Iowa student-athletes and seven-of-17 Iowa State student-athletes hail from the state. Altogether, Iowans make up 41 percent of the Iowa Corn Cy-Hawk series match.

CHAMPIONSHIP WEEKEND
The Hawkeyes played to a 4-0 record at last weekend’s 2014 SDSU Challenge to earn the first tournament championship of the Bond Shymansky era. Iowa opened the tournament with a pair of 3-0 victories over Eastern Illinois and North Dakota on Sept. 12 and concluded the weekend with a 3-1 win over Florida International and a 3-0 win over host South Dakota State on Sept. 13.

APPROACHING A MILESTONE
First-year head coach Bond Shymansky owns a career record of 298-111 (.729) and is just two wins from logging his 300th career victory. This is his 13th season as a head coach. He spent the past five seasons (2009-13) at the helm of the Marquette volleyball program and seven seasons before that leading Georgia Tech (2002-09).

A POWERHOUSE CONFERENCE
The Big Ten is considered the premier volleyball conference and continues to remain a force in Division I athletics. Seven Big Ten teams appeared in the most recent release of the AVCA Division I Coaches Poll (Sept. 15) including No. 3 Penn State, No. 4 Wisconsin, No. 9 Nebraska, No. 11 Purdue, No. 16 Illinois, No. 17 Minnesota and No. 25 Michigan State. Northwestern received votes.

ON DECK
UI volleyball opens Big Ten play at Nebraska on Wednesday, Sept. 24, before making its home debut against the Cornhuskers on Saturday, Sept. 27, on Mediacom Court in Carver-Hawkeye Arena. The Hawkeyes continue their home stand with matches against Ohio State on Friday, Oct. 3, and Penn State on Saturday, Oct. 4.