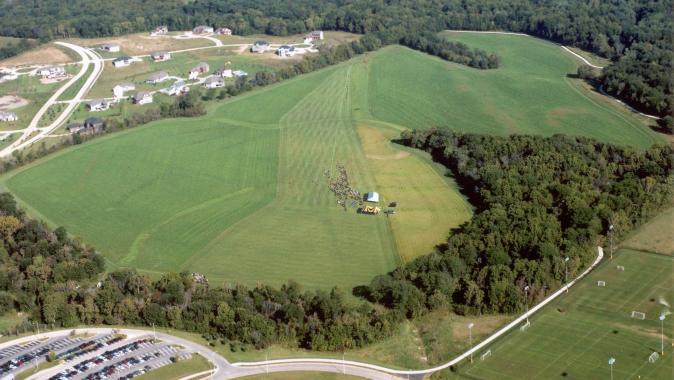 IOWA CITY, Iowa — Saturday will be a day of many firsts for the University of Iowa cross country team. Fourteen Hawkeyes will toe the starting line of the Ashton Cross Country Course for the first time in their collegiate career when the Big Ten Preview begins Saturday at 8 a.m. (CT) in Iowa City, Iowa.

“I’m mostly excited, but I’m also nervous,” said redshirt freshman Courtney Bruns, who has been a frontrunner for the Hawkeyes so far this season. “I didn’t get to race a lot last year because I redshirted in cross country, which is the sport I really like. I’m also excited because this will be my first 6K and I prefer the longer distances.”

Bruns is one of seven Hawkeyes on the women’s roster competing for the first time on the home course. Kelly Breen, Lindsey Bruns, Marta Bote Gonzalez, Alana Jones, Carolyn Newhouse, and Anna Reischmann are also making their Ashton debuts.

The lay of the land of the Ashton Cross Country Course is more than desirable for the Hawkeye first-timers. The course is located in a vast open field and the 2,500-meter perimeter provides participants and spectators with uninterrupted site lines.

“[Ashton] is a great spectator course. This event brings a lot of fans and family into town. It’ll be nice from the standpoint that the team will have people cheering for them for most of the race,” said UI head coach Layne Anderson.

“I will be able to get to a million spots, and certainly in the later stages when the race gets a little more difficult, sometimes hearing those familiar voices and getting that reinforcement is a nice way to get yourself over the hump.”

One Hawkeye in particular has learned to conquer the ins-and-outs of the course. Senior Kevin Lewis is no stranger to the Ashton Cross Country Course and looks forward to returning to familiar ground on the Big Ten stage.

“It helps because I know the tougher parts of the course and the places where it’s easier to make a little surge when people aren’t always expecting it,” Lewis said. “The course has thicker grass and it’s not as fine-tuned as running on a golf course.”

“(Saturday) is a smaller meet, so it probably won’t be blazing fast from the start,” Lewis said. “I imagine there will be a lot of pack running at the beginning and it will build throughout the race.”

The 2014 Big Ten Preview will bring together Iowa, Kansas State, Michigan, and Wisconsin. Northwestern will join the mix for the women’s race.

“Wisconsin and Michigan are going to be among the top teams in the conference,” Lewis said. “It’s a good way to ease into the season, feel out racing with those guys, and have one race on this course under us by the time the Big Ten Championships comes around.”

The University of Iowa hosts the Big Ten Championships on Nov. 2, and Anderson says Saturday’s race, like any race, is an opportunity to improve.

“I’m excited about what I’ve seen from both the men and women in the workouts and races thus far,” Anderson said. “We can’t come out of this race thinking we took a step back. The Big Ten Preview is another chance for us to take that incremental step forward to a potentially great performance at the Big Ten Championships in early November.”