Iowa Heads to No. 8 Nebraska for B1G Opener 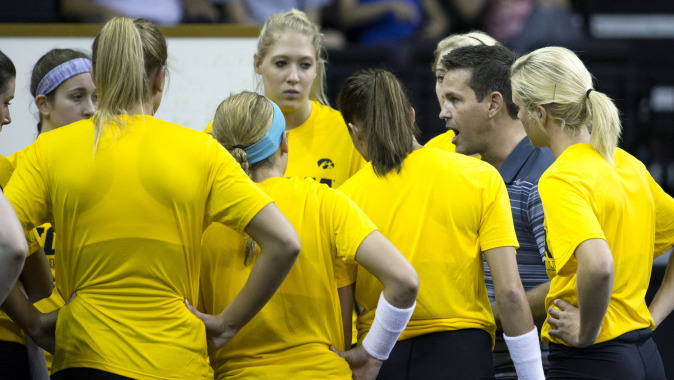 B1G OPENER
The University of Iowa volleyball team begins its Big Ten schedule at No. 8 Nebraska on Wednesday, Sept. 24 at 7 p.m. (CT). The Hawkeyes enter the match with an 8-3 record, while the Cornhuskers are 6-3 on the season.

APPROACHING A MILESTONE
First-year head coach Bond Shymansky owns a career record of 298-112 (.727) and is just two wins from logging his 300th career victory. This is his 13th season as a head coach. He spent the past five seasons (2009-13) at the helm of the Marquette volleyball program and seven seasons before that leading Georgia Tech (2002-09).

A POWERHOUSE CONFERENCE
The Big Ten is considered the premier volleyball conference and continues to remain a force in Division I athletics. Six Big Ten teams appeared in the most recent release of the AVCA Division I Coaches Poll (Sept. 22) including No. 3 Penn State, No. 5 Wisconsin, No. 8 Nebraska, No. 15 Purdue, No. 16 Illinois and No. 17 Minnesota. Michigan State and Northwestern received votes.

ON DECK
UI volleyball returns to Iowa City for its home opener against Nebraska on Saturday, Sept. 27, on Mediacom Court in Carver-Hawkeye Arena. The first 250 fans at the West entrance of Carver-Hawkeye Arena will get free pizza. Head coach Bond Shymansky will greet fans at a tailgate and all are invited to attend Chalk Talk in the Hadley Club Room prior to the match.

The Hawkeyes continue their home stand with matches against Ohio State on Friday, Oct. 3, and Penn State on Saturday, Oct. 4.